When Devin Townsend stepped onto the stage in the quite spectacular setting of the Ancient Theatre, Plovdiv, Bulgaria, to perform the album Ocean Machine, plus other tracks from his long and varied career, it was the culmination of a dream he’d been nursing for the better part of twenty years. As he said it ‘signifies the end of one era and the celebration of another.’ With many bands you’re usually quite certain you know what you’re going to get from them with every gig or album, not so with Devin Townsend, an artists falling into the category of someone unafraid of stepping out of his comfort zone, as witnessed by his 2014 release of what was described as an ‘ethereal country album.’ 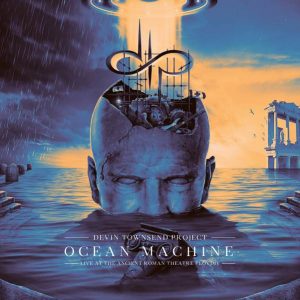 This is a gig on the grand scale, performed not just by the Devin Townsend Project, but also by the full-on thirty piece orchestra plus choir of the State Opera, Plovdiv. Throughout his career, Devin Townsend has often described his work as being ‘overambitious and underfunded,’ but there’s no lack of ambition here. After the intro music, the band appears on stage in front of the orchestra and choir and open up with ‘Stormbending,’ at the end of which Devin breathlessly informs the crowd ‘to play here and to do this is a dream.’ The first set features songs from previous albums, such as ‘Failure,’ from Transcendence, and ‘By Your Command’ from Ziltoid, with the orchestra filling out the songs and giving added impetus to them. After almost an hour and a half the orchestra and choir take their leave, and there’s then a twenty-five minute break whilst the stage is readied for the second half.

And it’s the performance of Ocean Machine the crowd is here for. The second set begins with the reading of Tennyson’s poem, ‘In Memoriam,’ with its references to the sea, and then, from the opening chords of the first track, Seventh Wave, the pace is unrelenting as the band powers its way through one of their classic albums. The Devin Townsend Project have been labelled as “Industrial Prog metal” but there’s little industrial about this set. What they play, such as tracks like Regulator, often resembles a full-on metal onslaught, but their music is about so much more than this. Their music incorporates different variations, feels and moods and, on tracks like Sister and 3am, when the paces recedes somewhat, Devin shows us his more sensitive side on an acoustic guitar. And, after all the guitar riffing beforehand, the concluding track, The Death of Music, played out against a soft electronic beat, with its throat-shredding scream to conclude, brings what was a stupendous event to a gratifying close.

It’s a pity, after a show of this magnitude, Devin Townsend has now decided to take a break from playing with the Project and put the band on ice for a while so he can focus more fully on other projects (sorry!) in the pipeline. If this show turns out to be the band’s swansong, then at least they went out on a high note.