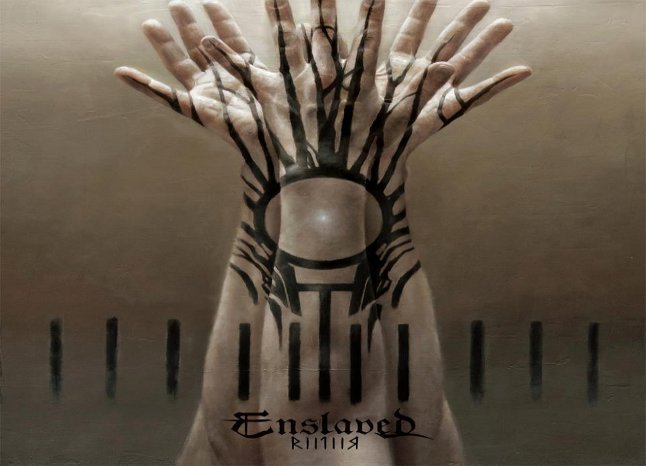 Enslaved, were the innovators of Viking Metal with their Nordic black metal sound but they have become so much more since then. Although they have always incorporated song structures unusual for the genre, they have continually progressed more notably with their last few albums.

Guitar feedback, then the first sounds of the bass line, Enslaved’s twelfth studio album, RIITIIR, released via Nuclear Blast Records, kicks off with thunderous sounds of vocals, guitars and drums. All three fighting with each other to win victory of their sounds marks a magnificent start to the album. With a fantastic beginning to the opening track Thoughts Like Hammers then breaking down to an awesomely monotonous drum beat of half the speed with evil sounding vocals broken up with the beautiful sound of keyboardist Herbrand Larsen’s voice. This track has great juxtaposition of extreme metal sound with the smooth melodic harmonies. These differences are backed up by the extreme tempo shifts, which seem to work so naturally with this song and is also a reoccurring theme on the album.

Death in the Eyes of Dawn has a lustrous feel with a lovely guitar solo half way though and more guttural vocals layered in with some spoken words. Gentle guitar strumming towards the end of the track brings it to a soft end.
The best way to describe Veiburner is pure beauty. Somber vocals from Larsen are gorgeous; this particular track has more of a progressive rock twist to it.

Storming in without hesitation come Roots of the Mountain with extremely fast beats and a sound that bites you hard. Two thirds though, a Mellotron comes in accompanied by some faint guitar. This provides just enough tension before continuing with more of a metal sound for the last third of the song. This track is easily one of, if not the, best song on the album. With its gorgeous catchy chorus, new instrumental sounds, a bass solo and a delicious fusion of styles and layers it keeps you captivated with every second of its 9:17 minuet journey.

With the album named after Track 5, Riitiir, you would expect great things… and you get them! The word “Riitiir” (remember to roll your ‘R’s) is actually fictional and was created by founder Ivar Bjørnson to redesign the word “Ritual” to fit it into Norse standards. Singing of life, death, cosmic seas and forces of great power, its seems a readily appropriate name to give this charming song. The whole feel and sound of the work has a certain ritualistic groove that makes you want to sway from side to side in some kind of trance. When Grutle Kjellson’s dark voice kicks in, this is where the drumming gets really funky. A repetition of lyrics gives the impression of some kind of chant in another section of the track, which gives it a very catchy resonance.

An eerie introduction for Materal begins with only the keyboards and drums. Slowly building up presence creeps in the singing and growling in unison. It all kicks off when Kjellson’s harsh roars become dominant over a catchy riff before Larsen then takes centre stage. This track although being slow-moving, is emotionally effective all the way though to its guitar solo and beyond.
Storm of Memories has a long introduction of 3 minuets before the ass kicking riffs. This track would have benefited from axing the forgettable melodies and kept the clean vocals only to punctuate certain parts.

Beauty fights Beast with Forsaken. The last track on the album dawns with an expanse of piano intonation, which is becoming a fundamental trait of Enslaved to back up every snarl. Lets hope they keep a good balance. There are parts on this track that serve no purpose and others that outstay their welcome, however this is a magnificent end to an otherwise alluring album and Forsaken drifts away elegantly which is a surprising finish.

This album shows Larsen is so much more than just the clean vocalist. He is a true lead singer now. Some may not like that. These people would be the same persons to have dropped Enslaved years back for not being ‘true to their roots’ but it is clear they are missing out on a breathtaking experience. RIITIIR is a sensory treat through a nefarious journey that needs to be explored with a keen ear.

Enslaved are clearly giants and they have marched on to create an outstanding album, which shows they are captivated with continually achieving greatness.