Review: Exorcism – I Am God 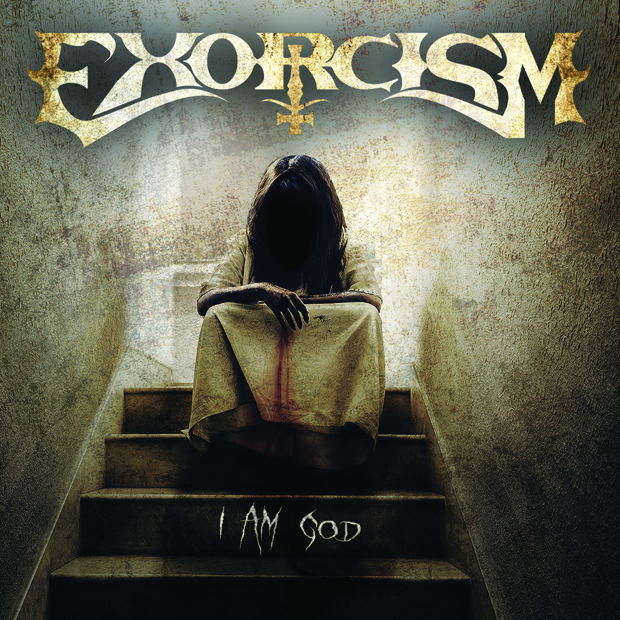 “I am God, I am the master, I am your God, Raised from Hell” sings ex-Killing Machine vocalist Csaba Zvekan as he, guitarist Joe Stump and bass player Lucio Manca swop the dark fantasy of Raven Lord for the doom demonology of Exorcism, bringing in drummer Garry King (Joe Lynn Turner, Jeff Beck) for the quartet’s debut album, I Am God, released on Golden Core records – ZYX Music.

‘End Of Days’ sets the stage with its mid-paced grinding doom metal, Zvekan’s voice shifting between Dio styled broadness to a Halford pitched scream at the end. Not only the main composer but producing and laying down additional rhythm guitars and keyboards, thematically the guy’s obviously got a lot he want to get off his chest as the lengthy ‘I Am God’ outlines but the rest of the band put in their fare share of contributions on this one from a guitar that scours and shrieks to a free-beating modern drum sound matched by a looping deep bass line, and come the main guitar solo Stump produces some quite scintillating fretwork, then e opts for a more Iommi-squired reverb cry baby sound alongside some heavy chugging on ‘Voodoo Jesus’ before taking in a neo-classical metal solo, though the song itself goes on a little long and the following ‘Last Rock’N Roll’ doesn’t really hit the mark but ‘Master Of Evil’ makes up for it; the chord structure might well owe a part-debt to Uriah Heep’s ‘The Hanging Tree’ but it’s the very sparseness of the song, save Manca’s throbbing bass line, that grabs your attention before Stump’s guitar produces some odd live sounding isolated guitar figures and then the band jump back in collectively, Zvekan adding some effective “whoah-whoas” harmonies to the mix that extends to an almost male choir sound as Stump’s final solo pitches from Eastern scales to neo-classical.

‘Exorcism’ moves between skewered guitar shrieks and a pumping bass ride with Zvekan’s voice tender for the most part, with the pained Dio-Halford extremes preferred left off the template for this one. Ironically, since it’s their signature tune, there are large parts of this number that differ from the band’s main sound that I found more aurally stimulating. ‘Fade The Day’ and ‘Higher’ go down a doom rock Dio route and tend to be predictable whereas you read ‘Stay In Hell’ as a song title and begin to yawn but are surprised by its musicality: a sparse almost pretty keyboard melody resides over drive guitars, the nearest we’re going to get to AOR with this band and some fine singing. Concluding number ‘Zero G’ also offers more variety, a more hopeful lyrical number, chorus harmonies and a riff that still grinds but does so in an uplifting manner.

A strong batch of ruminating metal numbers cast in the Dio/Heaven & Hell mould if you’re missing that sound.