Extrema go back to business as usual with ‘Headbanging Forever’ 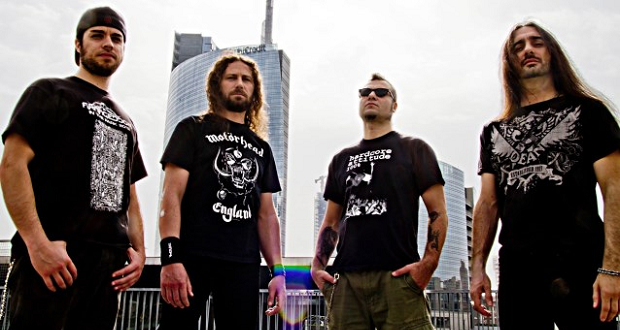 Extrema are one of those bands that fall into an unfortunate grey area in modern metal. Whilst in no way are they a bad band they are just often dwarfed by the mainstream heavyweights within the space they operate: in this case -the lighter end of thrash with touches of groove metal thrown in. Bands like Testament and Annihilator make sure Extrema remain and undercard band despite this being their seventh studio album release.

Headbanging Forever could be taken in more ways than one as a statement of intent. Extrema showing that they aren’t going anywhere and will continue to put out good, solid albums that really deserve a listen. As I mentioned this is their seventh release and is a tight, seamless record with plenty to offer but lacking a killer move. Headbanging Forever (despite the odd sci-fi tinged intro that feels a little out of place) gets off to a good start with ‘The Call’, a track that literally calls to the good old days, is that of thrash or metal in general. It sets the album up right, delivering some tight drum work and showcases some of the album best riff work. It’s after the first track that the album begins to lag not picking up again, gradually at first with the title track which sits at number six on the track list.

Everything in between just doesn’t bring much to the party, it feels too few new ideas were executed and the usual game plan was firmly stuck to. In the interest of fairness, this may have been down to the mixing and it would be interesting to shuffle the tracklist to see if the album could have a different flavour if alternatively presented.

However presented the way it is, it’s not until ‘Believer’ kicks in on the latter half of the record that chugs like a diesel-powered locomotive. That we get the first real taste of something more than tracks two through five offered. ‘Paralyzed’ follows and scorches like wildfire before the apt named ‘The Showdown’ packs a punch to close out the record. This entire section of the album shows what Extrema can do when they don’t play things too safe, if this could have been replicated on the first half of the record it would be a very different story.

If you want to check out Headbanging Forever for yourself and compare notes, it’s out now on Rockshots Records.