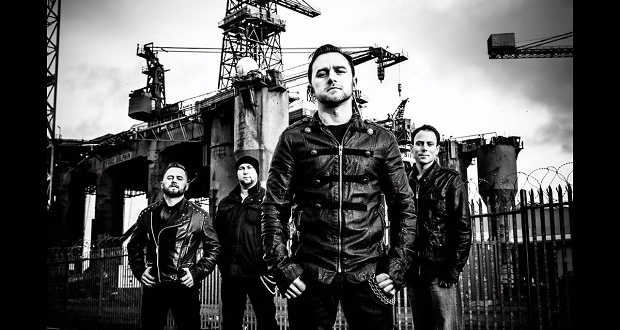 Despite the name, Gasoline Outlaws are not American: in fact brothers Matt (vocals) and Chris Fitzsimons (bass), Adam Parkin (guitar) and Ryan Hood (drums) are from that hotbed of blues and blues rock -Belfast.

The follow up to their first release, No Rules, No Laws, No Regrets is full of variation on the theme of rock. Riffs aplenty with some acoustic and even an orchestral ballad comprise the ten tracks of the new album, Light Up The World. The Belfast connection is also reinforced by the contributions to the songwriting from none other than Cormac Neeson.

The band suffered financially from the goings on with Pledge Music but have self-funded the release to repay the loyalty of the fans. “We have had to use funds we had set aside for touring and promoting the new album, to pay for the physical CDs and merchandise that our pledgers had paid for”, explains Parkin. “We couldn’t want let them down”. Respect to you all, those who care appreciate it.

It all starts with the title track – a Kinks meets Whitesnake rocker that is immediate and spot on in all departments, and John McCullogh adds some tasty keys too. There are so many highlights: a lovely guitar B3 battle on the Purple tinged ‘Fight For One More Day’; the warm, acoustic, piano-filled ‘Executed’ or the phone lights in the air (I much prefer lighters) ‘Where We Started’. My favourite, however, has to be ‘Better Days Coming’ with the delectable Amy Montgomery adding so much to an already powerful song.

Closing track ‘Hard Times’ has acoustic building up over multi-tracked vocals and a military snare into a song of depth and emotion that is topped off with a simply brilliant guitar solo from Adam Parkin.