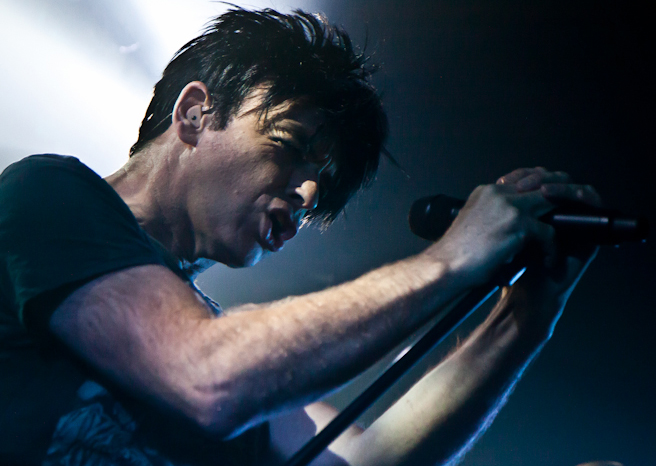 Seeing Gary Numan in a venue this small really is a barrage on the senses.  The lighting rig used tonight is the same one used in venues three times the size and while impressive when you are stood at the front, its somewhat intimidating at the same time. Moving further back and you see the full picture.  Or rather don’t.  The two video screens can barely be seen, hidden away in the dingiest of corners and add next to nothing to the performance other than cause slight distraction if you stand at the right angle. The entire atmosphere resembles the club scenes in Blade. Meanwhile Numan is on top form, as if there was anything else he could do.  Disappearing into the shadows and reappearing in the blink of a strobe, strutting around as if he were in his prime.

One thought that had crossed my mind about half way through the show was the make up of the crowd.  While it was mainly middle-aged folks who were probably going to regret the idea of going out on a school night, everyone seemed genuinely there purely for the love of Numan’s music.  Instead of the bandwagon’s been jumped on by so-called hipsters or whichever stereotype you wish to mention, tonight was packed full of people who have probably been listening to Gary Webb (you have to love Wikipedia) since the late 70’s and will continue to do so whilst bringing through the next generation of fans, a rare occurrence in the modern fickle music scene.

While tonight isn’t going to rank highly up on Numan’s list of memorable gigs thanks to some teething issues (his microphone manages to lose power partway through the third song) it’s still proof that there is life in industrial yet.

Check out all the photos from the gig here!