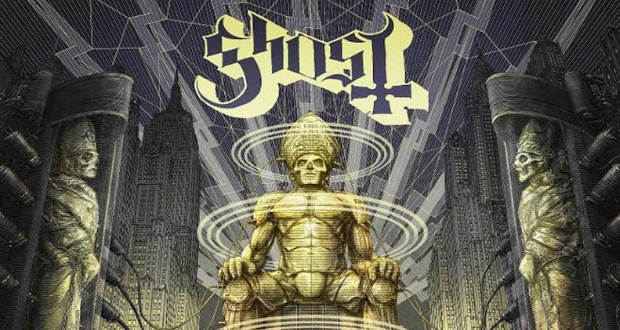 For Swedish occult rockers Ghost they end 2017 with a rather nice surprise for their fans in the form of Ceremony And Devotion. Being their first live album recorded in San Francisco during their North American Popestar Tour, it pretty much does exactly what it says on the tin with little complaint from us. Word of warning for those who are looking for new material, you won’t find it here. Rather unsurprisingly, Ghost it seems are playing their cards pretty damn close to their chest much to our frustration.

Following in the steps of their 2016 Popestar EP, one thing Ghost nail on the head is the transition of character from the visual splendour of their live shows to a purely sonic spectrum. A lot is left to your imagination but that’s half the fun of listening to this album. With a little help from frontman Papa Emeritus III’s [Tobias Forge] tongue and cheek antics with the audience you don’t feel left out from the experience. When he demands everyone in the crowd give one and other an orgasm you can’t help but sniff out a little chuckle and question whether we should follow suit.

The production is spectacular and throws you into the front row that paints an accurate picture of the band in their element. It doesn’t feel like it’s been edited or tweaked too much in post either and plays very smoothly from each song to the next. Currently a digital release, the true nature of Ceremony And Devotion will be realised in its vinyl form come January next year, which at this point we can’t wait to get our greasy mitts on.

Since the tour in question was named after their latest EP, surprisingly enough only ‘Square Hammer’ makes an appearance as the show’s opener. The anthemic power of ‘…Hammer’ is undeniable, however there’s a lot that little EP could offer here. Despite us being quite picky here, we can’t help but feel that epics like ‘Bible’ which gives the mighty ‘Monstrance Clock’ a run for its money, feels criminally left out.

A minor gripe, however it doesn’t take anything away from the experience of listening to this record. The barrage of fan favourite after fan favourite paces itself nicely and doesn’t outstay it’s welcome. Clocking in at an hour and twelve minutes, you’d be very surprised how quickly it all flies by. A great way to pass the time before their new album drops next year.

Ceremony And Devotion is out now via Spinefarm. Limited Edition coloured vinyl, eight-track cassette and CD will arrive on January 19th 2018.