Goo Goo Dolls have a predictable formula when it comes to their music. The softest rock, meaning the lightest taps on the drums, the same few piano chords echoing in the background, pop rock guitar styling, added to the most inoffensive lyrics, with not a curse word in sight…well, sound, and you have one of their records. Their latest albums are indistinguishable from each other, and there certainly haven’t been any hits as big as ‘Iris’ since the early 00s. Despite this, albums still sell, music is still played, and now, miracle or not, they are back with ‘Miracle Pill.’ It is rare for a band’s music to be accessible to both your 2 year old nephew and your 82 year old grandmother.

‘Indestructible’ is a great introduction to the Goo Goo Dolls, with every aspect of their music building into a chorus. Like a nursery rhyme, the repetition in the chorus of ‘Fearless’ makes it catchy and memorable. You will probably read ‘fearless’ ‘fearless’ in the beat of the song for a long time. The lyrics aren’t the deepest, but it’s certainly the catchiest from the album. It would be a good song to hear live with the clapping beat closing it off.

The titular song, ‘Miracle Pill,’ is a love, or hate, song for the current generation. Vocalist John Rzeznik said, “Miracle Pill is a metaphor for instant gratification or relief. If you’re feeling sad, you take a pill. If you need approval, you go on Instagram and receive it immediately. It speaks to the second decade of 21st century angst. We’re inundated by bullshit, garbage, and false solutions to every problem we have. The real path is to work hard, be nice, and keep going. However, this route gets overlooked, because we’re all looking for the ultimate shortcut and escape.” This is definitely a highlight on the album. Conversely, there isn’t much to say regarding ‘Money Fame and Fortune,’ the title makes it appear deeper than it is. All in all, it is a mellow rock song. 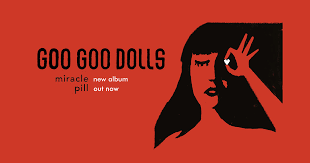 ‘Step in Line’ comes as a welcome surprise, not only with a different vocalist, but beginning with an electronic beat, rather than the regular piano or acoustic guitar. They create their own dance, even giving us instructions with ‘Step in line, step in time.’ You certainly feel the need to step in time to the song. Contrasting to this, an acoustic guitar leads us in to ‘Over You,’ and Rzeznik’s delicate vocals are back on form. Maybe they’ve had a lot of romances in their time, or more likely a lot of heartbreaks, either way, ballads have always been Goo Goo Dolls’ forte. Despite this, ‘Lights’ is possibly the weakest lyrically, and not just because his repetition of leaving the lights on single-handedly lead to global warming, but because they are simplistic. Unlike ‘Fearless,’ with its fun repetition and nursery rhyme qualities, this just sounds like a children’s song. It’s surface deep and doesn’t add anything at all.

‘Lost’ is literally lost on the album, and although ‘Life’s a Message’ echoes throughout, it is unclear what message they are trying to convey. More clear is Rzeznik’s vocal ability in ‘Autumn Leaves.’ Just a beat and some simple piano chords accompany him in the opening. ‘Think it Over‘ doesn’t seem the best song to end on, as it doesn’t really make you think it over, not like ‘Miracle Pill‘ or ‘Fearless.’

What makes the Goo Goo Dolls so appealing, though, is the catchiness of their music, combined with relatable lyrics, and they achieve this in the album. However, if you played someone the songs and asked them to name the artist, they would probably struggle. There are hundreds of rock bands out there sounding similar, but they are certainly at the top.