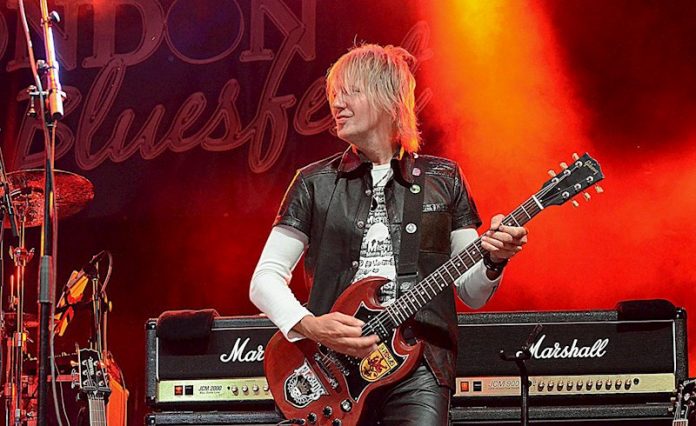 With a CV longer than my arm (and leg) Jeff Kollman has played with some major names (Glenn Hughes, JL Turner, Chad Smith etc.) and contributed to many of their songs too. He has about twenty solo or collaborative albums to his name already and now, there’s a new one for guitarists to drool over and, for those who think all guitar instrumental albums are just packed with more shreddies than Nabisco (look it up!) then I would advise you to think again…on East of Heaven, Jeff makes the guitar speak albeit briefly on the ‘intermission’ tracks ‘Loss’, ‘Homage To King Edward‘ (not the potato) and ‘Insomnia’; still nice, just very short.

For longer, tastier and altogether very clever instrumentals, listen closely to the sweeping ‘The Mass Exodus‘, the ethereal ‘Ghostly‘ or the aching ‘Isolation 2020‘ and you will begin to grasp at the abilities on display; acoustic or electric; picked, hammered, bent, volume-controlled or tremolo driven… he can do the lot and makes a failed guitarist like me green with envy. The beauty of this album is the depth and expression Jeff builds into every song (yes, song) and he isn’t over flashy or shredding like a maniac: he can do that as well, but only if the song dictates it. The laid back, percussive ‘East Of Heaven’ is astounding without any histrionics at all; imagine Jeff Beck duetting with Steve Morse… it’s that good. The closing track, ‘See You On The Other Side‘, is an acoustic delight with various motifs blending so well, and then picked electric adds another voice that says so much.

Elsewhere you can feel that each note is carefully planned and executed and, if you don’t want an hours worth of instrumentals, then scatter these fourteen tracks through your playlists and enjoy the varied, subtle and quality playing between your other favourites. If, like me, you are a simple guitar geek… buy it!