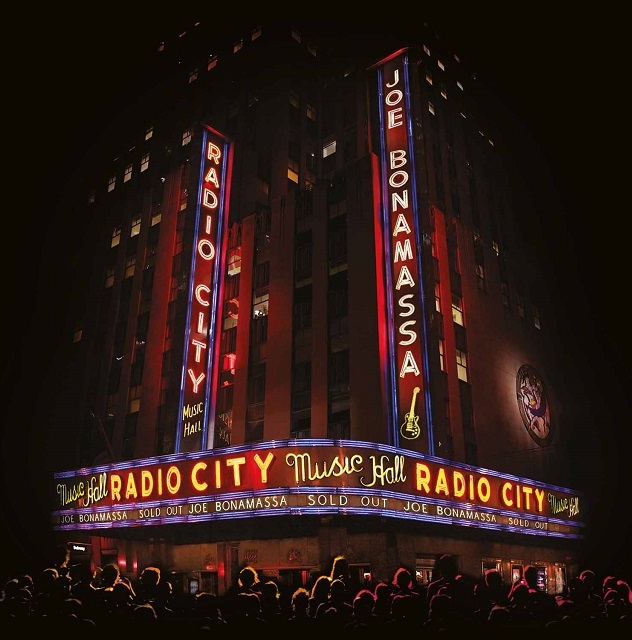 Radio City Music Hall is one of those iconic buildings that populate New York. A venue that showbiz royalty perform, you know the likes of Frank Sinatra and Barry Manilow. It’s a big thing, especially if you hail from the city. Joe Bonamassa played two sold out nights there this January, the icing on the cake to a year and a half’s worth of touring the world with a half acoustic/half electric set.

For those unfamiliar who feel they need the scene setting properly, they are advised to play the Joe Bites The Big Apple – Behind The Scenes bonus section of the DVD first, taking in as it does a visual tour of tour buses travelling down freeways by day and night, reaching and carousing the city sites and ending up with the road crew setting up for the shows, bantering in between, plus interviews with Bonamassa, his family and producer Kevin Shirley.  The family segments reveal a musical male lineage in the Bonamassas that stretches back to the roaring 20s and go some way to explaining the guitarist’s current horn section additions to live performances; those with Shirley lead to an astute observation that buildings like Radio City, Carnegie Hall, our own Royal Albert Hall etc. could not be built today – philanthropists not only invested their money into them being built but as testaments to themselves; the design and craftsmanship that was undertaken and the quality of sound retained within their walls o this day is hard to find in the purpose-built sponsored shells of today. But onto Bonamassa’s music.

Sitting perched with variously tuned guitars, Bonamassa and The Huckleberries (Gerry O’Conner of The Dubliners on fiddle and mandolin, Scandinavia’s Mats Master on the extraordinary nyckelharpa and mandola master, plus keyboardist Reese Wynans and percussionist Lenny Castro both of who will be on stage all night) they open with a version of ‘Dust Bowl’ that jingles and busks with more melody, and less vocal angst than its studio blues version. ‘Trouble Town’ follows and one is reminded of the late 70s Eric Clapton band, so much so  you’re hoping Yvonne Elliman will walk out to offer some sass with gospel, the Celtic flavoured  ‘Still Water’ follows, and then the number they should of opened with,  the title track from his last studio album, Different Shades of Blue. Lyrically it defines and offers a statement of intent for the newer direction Bonamassa is heading, musically and perhaps personally, and is also more profound musically albeit that the version played is also given space to breath and flow.

With ‘Black Lung Heartache’ Bonamassa takes a slide to his acoustic and starts applying some tonal magic in a jazz boogie vein, moving into country folk akin to Zeppelin during their acoustic phases, not least because of the added mandolins being played. O’Conner’s mournful violin steers  ‘Happier Times’ alongside some well placed sparse piano notes from Wynans before he extemporises elegantly, followed by Bonamassa with a bluesier counterpart.

It’s Bonamassa’s singing that holds us for the first half of this show, professional and clear, with his guitar playing subservient to the songs while The Huckleberries handle most of the melodies and solos. The set itself is a little too similarly paced but sets a mood. When the lights go up for the full-electric big band his Gibson soars with high pitched wails inspired by the late Paul Kossoff while just about staying shy of Gary Moore histrionics and they launch into ‘Never Give All your Heart’ a song worthy of Free’s Heartbreaker album while also offering a more modern epic approach. When the guitarist solos he does it with drive and passion, creating notes that tumble out expressively. There’s a feeling that the show has really begun now.

The tempo changes with the jazzy jittering blues of ‘Hidden Charms’, Bonamassa walking round the stage appropriating Clapton’s woman tone sound for his own purposes, adding melody and rhythm fit for purpose appropriately. The horn section of trumpeter Lee Thornburg, trombonist Nick Lane and saxophonist Paulie Cerra adding that parping ompf factor, while drummer Tal Bergman and bass player Carmine Rojas alongside percussionist Castro look like some heavy duty guys you wouldn’t want to get into an argument with yet often show their milder side musically. ‘Living On The Moon’ is riffed-up blue rock with a rocking wailing solo first time round, than next time Bonamassa goes into heavy metal mode, played with fire, effortlessly. The crowd applause is understandably loud when the song concludes.  Again, showing a much greater variety of tone and pace in the electric set the band take on the Muddy Waters classic ‘I Can’t Be Satisfied’ giving it a lighter jazz bopping feel than the blustering down-to-the-bone macho blues approach many apply, the guitarist taking up his slide to good effect, with his second solo in particular coming across as a cheeky little number.

A point should be made here about the filming. The acoustic set was close up on stage, if you wanted to know the chords you couldn’t far go wrong, with ample time also given to the other players. There is a similar situation on the electric end of things but with a larger stage personnel it’s hard to get everyone air time, and the use of two and four split screens is effective here, not least because you see band members reacting to each other, while guitarists will continue to have a field day slowing down some of Bonamassa’s solos and watching where his fingers go. For ‘Double Trouble’ those hands pretty much go all over the fretboard, a slow burn intro over tinkling piano during the opening, later launching into a solo that holds a note for just under a minute before firing up and down from high to low end string, then blasting out along the length of the neck with clarity and warm intonation. Swapping guitar for what sounds like The Beatles’ ‘Day Tripper’ riff being dismantled then put back together and given the Free treatment on ‘One Less Cross To Bear’, the horns accentuate keenly, the percussion end give it their all and Bonamassa finger picks a solo then plucks out his plectrum for some speedy refrains.

Highlight of the night is ‘Love Ain’t A Love Song’ a cool, loose and funkier blues version than its studio counterpart while retaining that fantastic chorus chord run down. While Wynan solos on organ, Bonamassa skanks out chords then takes off on a solo that keeps its feet in the blues but heads out in directions favoured by Yes circa 90125. The song is a clear highlight of the evening. Changing guitar yet again, introducing the band and more importantly his mother whose birthday it is before the band launch into ‘I Gave Up Everything For You, ‘Cept the Blues’ giving it a Beatles-go-boogie stomping feel with some added big band blues sections and some fine turns of phrase on guitar. His six string hangs round his neck, rarely touched by his fingers until the concluding solo on the evening’s final number, opting in stead for hand gestures just a little too reminiscent of the late BB King’s on ‘So, What Would I Do?’. This slow blues however offers opportunity for a number of the band to stretch out, from its opening on piano with the horn section sighing away until Cerra takes a more upbeat sax solo, followed by Wynans swopping over to organ and finally Bonamassa on a sustained solo drawing everything to a conclusion in style.

Joe Bonamassa still inhabits the sound of Kossoff and Clapton from time to time, but he brings his own approaches to bear upon those nuances, and seems more than comfortable with this big blues band approach, so no real surprises evident throughout Live at Radio City Music Hall but some pretty good music being played. The DVD’s a good watch but the CD offers a differently sequenced set of tracks, and as an aural album it offers the better option for the listener in general.