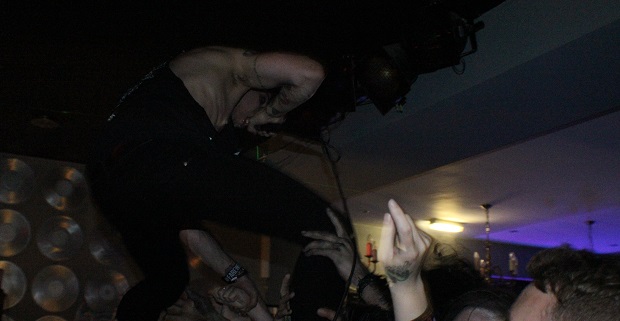 The whole ‘New Grave’ thing has almost came out of nowhere, this wave of unsigned, DIY, goth-inspired rock bands are popping up everywhere. Leading the cavalry is Bristol’s Ashestoangels, who are the headline act on this tour. Named ‘British Horror Story Tour’, as a take on the popular TV series, it features two of the best up and coming British acts, as well as a hidden American gem and a couple of local bands.

The Globe doesn’t seem to do a tour of this size justice. Let’s be honest – this is a pub with a sectioned off area. With the devout following of Ashestoangels and The Dead XIII, we could of filled this venue twice over. For all we know this could be a good thing. Intimate gigs are always great. Think about it, one of the most legendary gigs was Sex Pistols was in Lesser Free Trade hall in Manchester. A small venue, yet almost everyone in the audiece formed a band or got involved in the music industry afterwards. Will this be the New Grave equivelant?  We will see…

First up we are greeted by three guys in masks playing some pretty surreal sounds. Local act Snails With Nails are pretty interesting, but slightly avant-garde for this tour. Next are hard rockers Eden Rejects, a great performance and interesting covers to boot. With more original material we see this band getting better every time.

Next to take the stage are the metalheads-in-make-up The Dead XIII. Their sound hits us like a tidal wave with the industrial inspired ‘Frostbite’. Starting a mini-mosh pit the crowd love their hard riffs and horror-punk vocals. Tracks such as ‘XIII’ and ‘Can’t Escape The Grave’ show this band are on to great things. Definitely the loudest band of the night – which even inspires a random pub patron to start rocking out among the many New Gravers. Inspired by Wednesday 13 and Rammstein, The Dead XIII believe in the theatrical side of rock ‘n’roll…and it shows! The Manchester band promised us a great show and they delivered. Only set back is they didn’t have a stage as big as their sound, which would highlight their sound and style so much more.

Some familiar with The Dead XIII’s sound might not agree with them being on the same bill as the punkier Ashestoangels and more mellow Farewell, My Love – yet it isn’t brilliant platform for them to reach new fans and broaden the audience’s gig experience. It’s safe to say the horror-metal crew will be headlining a similar tour of their own one day, and it’s brilliant to have such a mix of styles on this tour.

American Tim Burton -inspired rockers  Farewell, My Love take to the stage wearing black, gold, white foundation and blonde high-lights. Although this is the ‘British Horror Story’ They fit in to the bill quite well.  Hitting the mark between Panic! At The Disco and My Chemical Romance, this is a band that easily have a market in today’s rock scene. Tracks such as ‘Mirror, Mirror’ and ‘Gold Tattoo’ have the audience are eating out of their hands.  At this stage the audience also includes members of Ashetoangels and The Dead XIII, proving they are also fans themselves.

There is an MCR-shaped hole to fill at the moment, and if unsigned British bands like Fearless Vampire Killers or Ashestoangels can do it – why can’t an unsigned American band like Farewell My Love not break the mainstream? Watch this space for an FML headline tour.

After a promised ‘quick change over’ out headliners take the stage and kill the lights ‘to make it more grave-yard-y’, according to vocalist Crilly, for what is sure to be a show to remember. Watching Ashestoangels is like an instant rush, if you have seen them live before – you will be familiar with this energy. The charisma of not just frontman Crilly, but guitarist Adam, bassist Nico and drummer Jim hits you like a ton of bricks. Of course with a relatively small stage – you can’t contain this goth-punk powerhouse. Crilly scales the the crowd and we’re not even in to the second track. Tracks like ‘Six Six Six’ and ‘The Wake’ get their following (also known as ‘Horror Cult’) singing along.

You can see why this tour has THREE headline acts, but the Bristol boys are the real main attraction here. The ‘New Grave’ edition of their latest album (again titled ‘Horror Cult’) contains a disc of the whole album played live. This really makes sense because their live performances really sell the band. You have to see it to understand how spot-on this band are in the flesh.  FML fron-tman, Chad Kowal, even provides vocals for ‘Living Hell’ -singing William Control’s parts, naturally- bit of a treat for the Newcastle crowd.The Ashes guys appreciate what their tour-buddies do for them and encourage the crowd to keep following them.

More hard-hitters like ‘Dorian’ and ‘Bury Us In Black’ make this an unmissable gig. Just about every member of every band get on stage for the finale of gig for a mash-up of Misfits’ ‘Dig Up Her Bones’ and AFI’s ‘Days Of The Phoenix’ – two contributing influences to the ‘New Grave’ scene. Seeing all these musicians on stage makes you think: this is really the start of something big. Like the Pistols in Manchester, these intimate gigs could inspire a generation of musicians.

A hard-working band like Ashestoangels need more attention. This is their third tour this year and they get better each time. Despite the tiny venue this has been a BIG gig. I can see these bands headlining much bigger stages in the future.