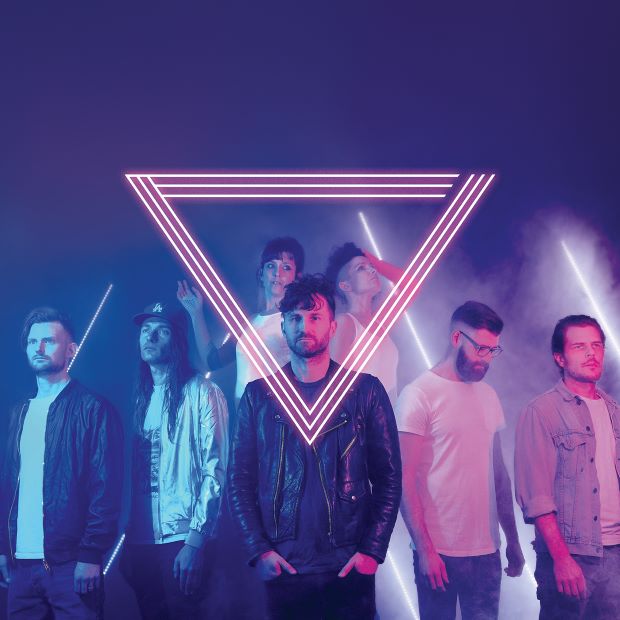 We make our way down the backstreets of the second city’s Digbeth location. Formerly an industrial area on the outskirts of the city centre, more often now you’ll find galleries, art spaces and pop-up nightclubs. Centrala has been going since 2012, established as a place where a migrant Polish community could congregate and subsequently integrate and share their culture with other Brummies.

We’re here tonight to see Flight Brigade but on arriving within we discover it’s also a fundraiser for Not Normal. Not Right – A good cause, its intentions to prevent sexism and intimidation in general at concert venues. Thus, there are school girls, university students, hip bearded slim jeaned blokes and couples taking up a fair proportion of tonight’s main audience. However, things do fragment during what proves a long night.

There are local bands featured and a sizeable number of the audience spend their time up or down the staircase, moving through the crowd or chatting during acts, dependent on which friends on stage they’ve come to see. Regardless, we pay our respects as diligent music journalists should and watch all the acts, even if they’re not our cup of tea.

First up is Millie May and her band. Sporting long dark hair, full length white frilled dress and acoustic in hand she sings Gothy dream pop tunes, with a static rhythm section and guitarist who adds echoed Gilmour style solos. Songs of domestic violence and winter romances filter her set, but an unfamiliarity with them and a lack of visual movement on stage (save when she changes to play keyboards) fails to engage us truly.

Lycio are next. Female fronted vocalist, a keyboard player and percussionist/possible DJ mixer constitute their line-up. The guys are seated, she stands waving her arms as she sings in what night loosely be called Afro-gospel trip-hop. My wife stands beside me, her hearing perfect pitch she is not impressed by the too often off-key wailing.

The gaps between sets lose any ambiance gained by previous bands, and people descending the staircase to a seated coffee area and bar often miss the following act’s set or arrive half way through, even though late in the evening a list goes up denoting new stage times. It states Flight Brigade will now finish at 11.30pmm, whereas the website stated the place closed at 11, presumably for reasons of curfews. For those needing to make late transport arrangements it will cause problems, whether youngsters catching lifts or their last bus home or those older who’re likely to incur parking fees on their vehicles.

Nottingham’s Hanna Brown’s hits the stage. And, as with the first act she sings and plays guitar, likewise presumably having written the songs she’ll play that way. Hers however is a modern rock band, with an understanding of aural dynamics and a bit of stage presence to them.

After her set, those downstairs are ushered upwards where a short speech is given and we show our support for the Not Normal. Not Right campaign by holding up paper plaques given out for a group photo. Happy as we are to oblige, there’s another bit of a wait.

When Flight Brigade do take to the stage it’s like night and day. One can understand and appreciate them being on board with this cause, but it’s all been rather a local community affair until now. They start with a sparkly big bang playing ‘Stranger Things’. Keyboards and violin strike out in melody, the band as a whole delivering a heavier barrage of sound than on record, with vocals still cutting through cleanly. It bounces with energy as do the six-piece on stage.

Dirty guitar chords follow a drum beat intro and keyboards join the mix as it all becomes rather Hawkwind-esque for a moment but their art rock indy vision prevails on their next number. Macauley then offers an evocative effect laden violin introduction, fading as she and Baines sing in repeated unison “Be my valentine” prior to a hefty dancing rhythm over which guitar and keyboards swirl for the main song to weigh in.

Baines explains that ‘Brainwave’ is about his brother’s metal health issues. It’s a funky indy rocker with sweet harmonies intercut by odd jagged guitar noises evoking the electrical stimuli within the brain. At one brief point it goes rather grandiose in a Queen manner before raging rocked out electronics hold fort. The effects and range of sounds reflect the highs and lows within the song perfectly.

‘39 Steps’ from their first album begins with a shimmering of guitar and throbbing trebly bass. It comes across like Joy Division meets Siouxsie & The Banshees. An “Oh, oh” vocal and drum section splits the difference before it checks out with a rather Celtic ambiance. It’s all rather good so far.

Keyboards lead in over a gentler throbbing beat with their next number, where less is more and the violin again gets chance to shine. First album title track ‘Our Friends, Our Enemies’ follows with a WWI radio voiceover and the band picking out a Morse code style melody as Baines sings over the ensemble. The mood begins to change, building momentum and melodrama a guitar solo heard before returning to the song’s main framework alongside a barrage of manic guitar. Pink it should be noted is a highly effective player; a lot of the sounds you think are keyboards or studio effects appear to emanated from his six string.

‘Fury Road’ rides in next on a sinewy high guitar melody aptly, keeping momentum even as it branches with euphoric vocals over crashing chords. A dystopian love song that for some reason a number of females in the audience decide is an opportune song to spread themselves out and do a bit of dancing. Their latest single follows, again the harmonies and lead vocals are top notch and the single ladies are joined by dancing couples and continue to do so for the upbeat heart-tugging ‘Bullet to the Heart’.

And so it goes, those not dancing clapping along here in a little corner of the second city where New romanticism meet indy upstarts to produce a wall of shimmering sound. Charismatic live, their layered arrangements come across well, and Centrala afford Flight Brigade (as all the other bands) a highly effective light show, the only downside being down to timing, the band playing beyond their allotted time but an auspicious sound that bodes well for their future.