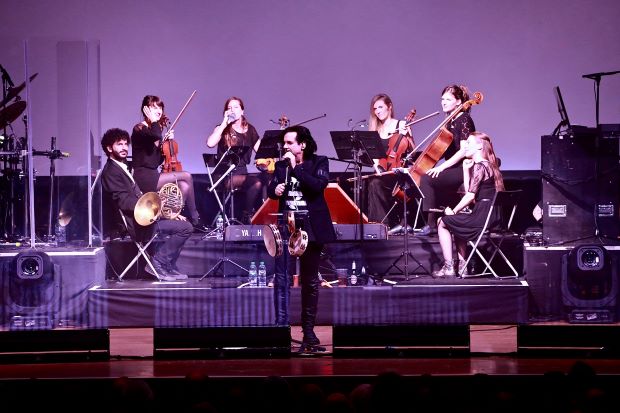 They’ve ripped the side of the Symphony Hall. Posters declare they are: “creating an environment of universal language – music.” If developers taking great chunks out of the heart of the second city’s centre is music to your ears, so be it. I tend to find the accompanying apartments built in such localities help fudge the issue and force the closure of music venues, meaning the land can be bought up cheap. Maybe this time things will prove different; the venue is after all world class.

Some three decades back I remember sitting in a luxurious hotel bar across the road, smiling as a young band called Marillion soaked in the first fruits of success. Their then lead singer charming bar staff and walking back to others with a tray of whisky shots. The band’s had its up and down since then. But with a loyal fan base beside them they’ve had some of the best years of the autumn of their career in recent times.

So, here we are seated looking on centrally towards an impressive stage set, The Beach Boys offering ‘Good Vibrations’ over the PA while an impressive stage set holds court before us. Red beams frame blue spotlights shining down on expectant instruments, a purple/blue backdrop shimmering down along the back wall as we wait. 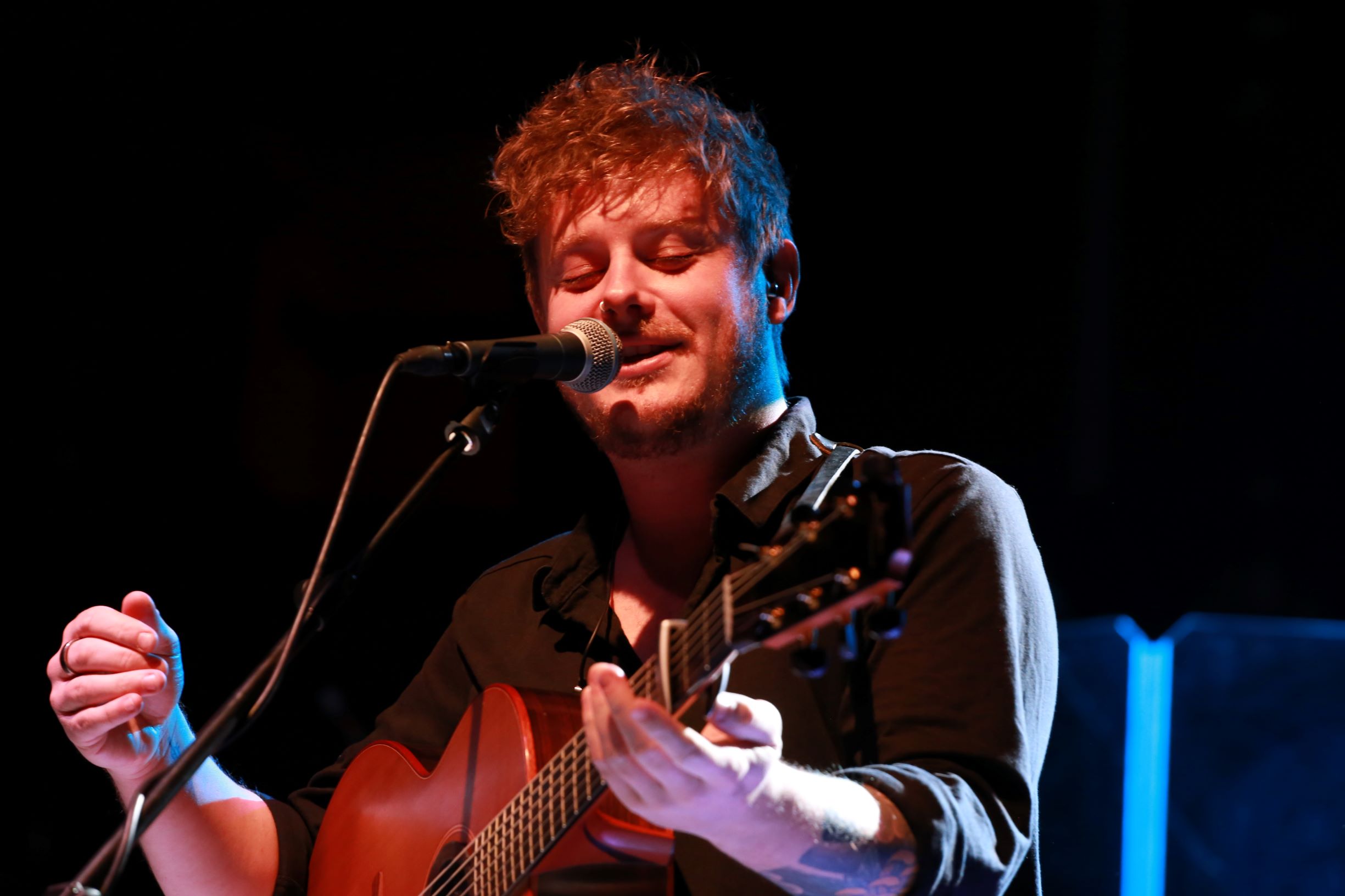 Harry Pane walks on with an acoustic guitar in hand, the large frame of double bass player Nathan Weenie alongside him. A dry warm range to his young voice he’s an able finger picking instrumentalist. Earthy but vulnerable he opens with a song called ‘Beautiful Life’ demonstrating a love for life, will recall his late father fondly in ‘Fletcher Bay’, add some gothic folk romance to a cover of Fleetwood Mac’s ‘Big Love’, evoke both Ralph McTell and John Martyn in his playing with ‘Ghosts’ and end with an up tempo folk slide blues number called ‘Mama’.

It would be easy to stick him in that Ed Sheeran mould but don’t. He’s worth checking further.

John Lennon urges us to ‘Come Together’ over McCartney’s undulating bass as people head to bar and toilet alike while on-stage dry ice seems to engulf it. Amidst it a single roadie tests out assorted guitars as Suzanne Vega’s ‘Marlena’ watches from the wall as the audience take their seats. 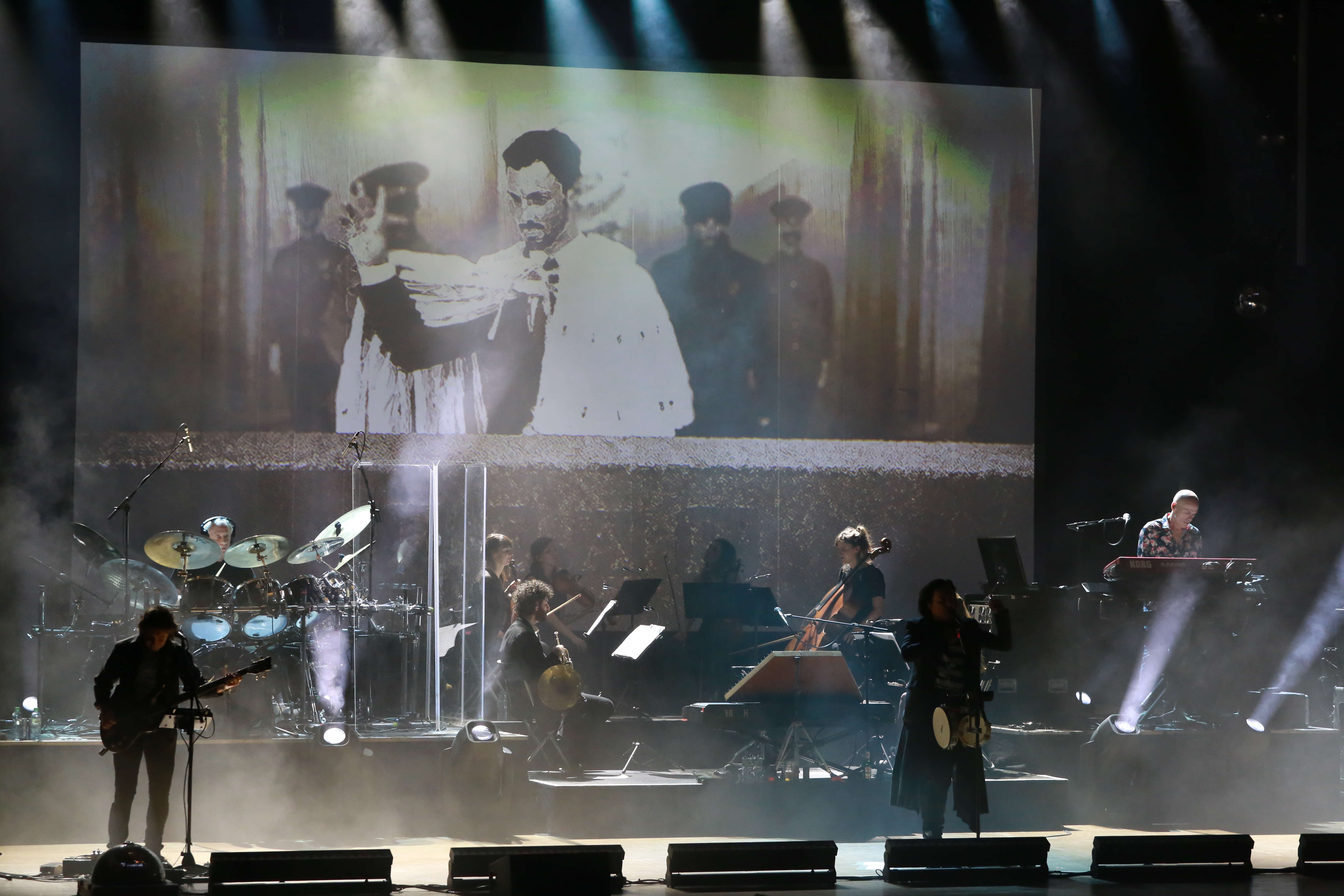 A virgin among acolytes I sit bemused as what appears to be a regular event at Marillion shows: A road manager or similar who appears known to the crowd requests we refrain from spoiling the show for others behind us by not spending the night with hands raised taking dodgy photos on our mobile phones. I’ll applaud that one. Alas a number of fans are of a certain age and have to get up to go the loo again through the show, so end up spoiling the show just as much for others, if not more so as whole rows have to stand to let them get by. But that’s for later.

Bowie’s ‘Heroes’ comes over the PA, the orchestral guests maneuverer themselves to their positions on raised platforms to the rear of centre stage. A six-piece, consisting of French horn, flute, cello and violins, we’ll get introduced to them individually in time. 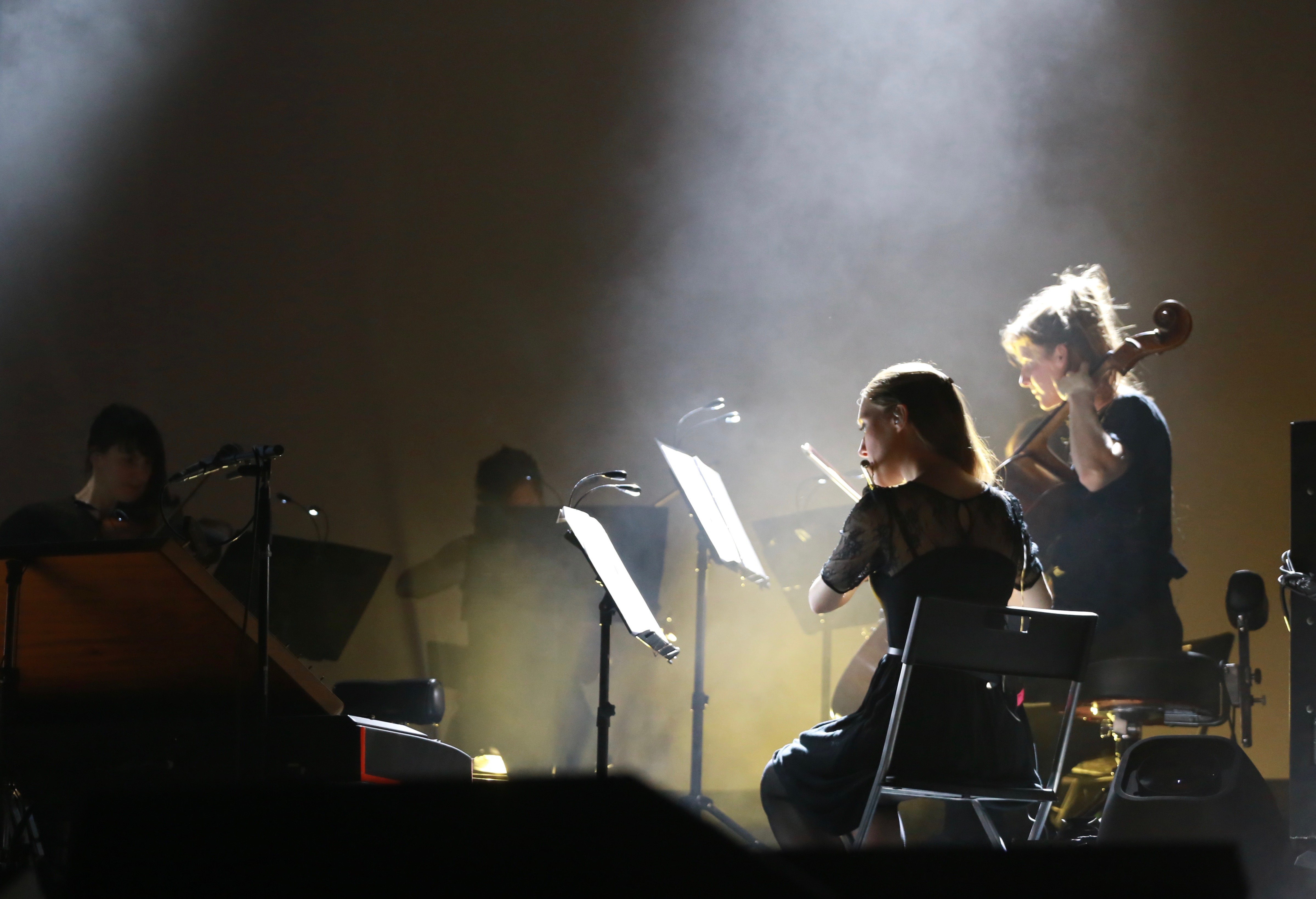 For now, white lights spin out to blind us, the stage blacks out, the audience applaud as on cue the band walk out under now yellow lights taking up instruments as a procession of chords build mixed with eastern flavourings and exotic percussion as frontman Steve Hogarth walks on wearing what looks like an ill-fitting duffle coat.

During the night he change jackets, shirts and tops a few times but the overall visual impression is of a gothic Alex Harvey dragged through a hedge backwards. It’s a distinct image that’s for sure, one that very much draws your attention throughout the night, initially kneeling as he sings direct to the front row then leaps up and walks towards the mic stand centre stage as they perform opening number ‘Gaza’. 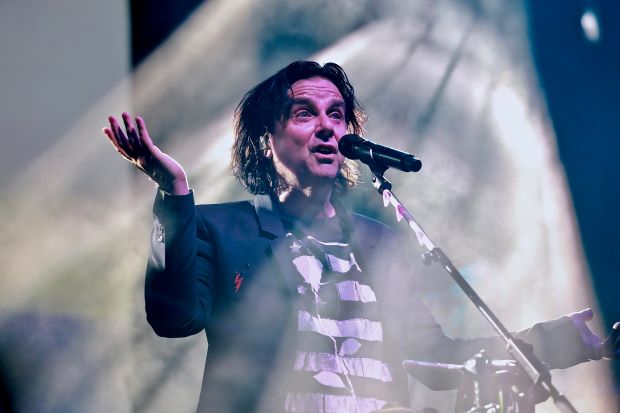 Our secondary focus is Pete Trewavas. Frequently moving in circular motions, shifting the weight of his body to one side or other, his right arm whacking his bass precisely as he adds a melodic rhythmic edge. Whereas guitarist Steve Rothery barely moves an inch all night, save to give wry humorous looks at others between songs or nods of the head to fans. As such visually we tend to turn our gaze towards him during epic guitar moments of sonic clarity, on which the audience is not short changed. A faithful roadie will also bring a guitar on and off stage for Hogarth, and though it’s hardly an imperative addition to their live sound it helps roughens up matters now and again. 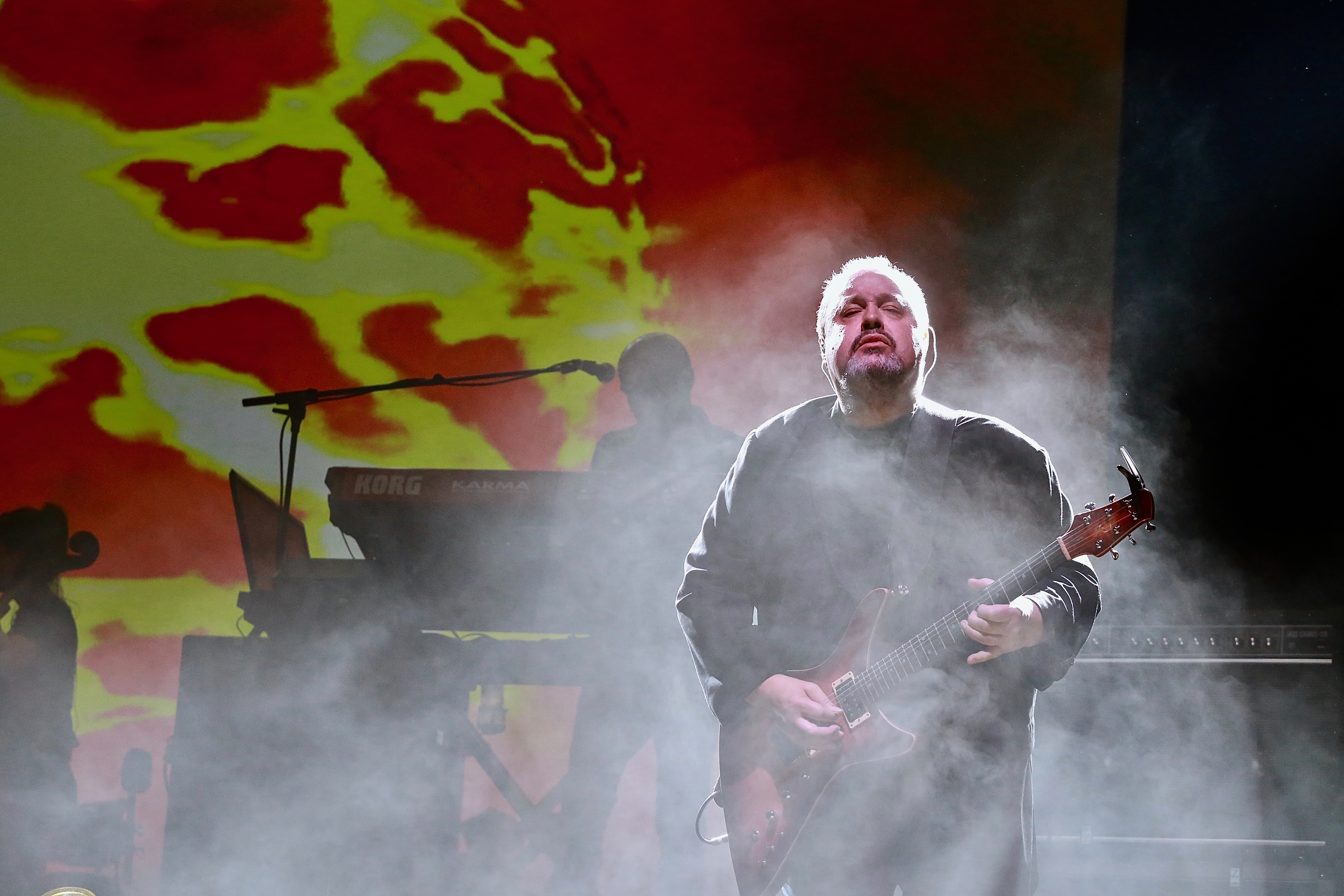 From my vantage point I have to imagine Ian Moseley’s head is behind the large drum kit that drives next song ‘You’re Gone’ accompanied by Trewavas running the length of his fretboard, before adding a light funk touch over which Rothery adds an anxious guitar ruff while soundscapes are created between the string section guests and keyboard player Mark Kelly. The latter plays an elegant piano piece, Rothery filling in grace notes before a wiry tortured sustained guitar solo unfolds as a molten world burns in volcanic overload on the screen behind them. Watching the screen then shift to the calming light of a single candle before approximating what can only be described as spermatozoa or attention refocuses as Rothery having picked up a slide he inlays melodies as the song draws towards conclusion. 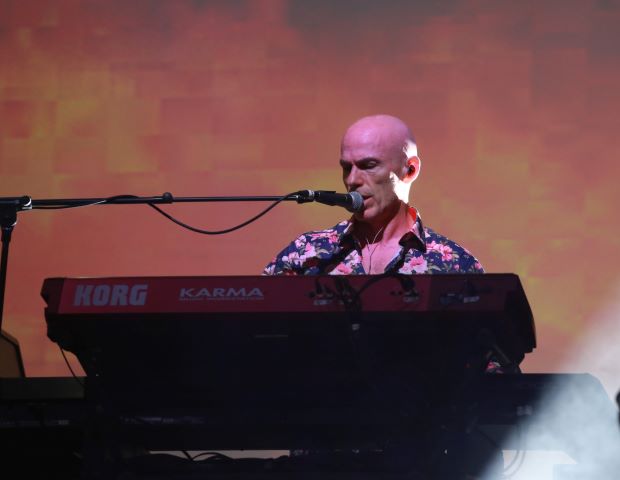 “Good evening, Birmingham!” calls out Hogarth bouncing back on stage after his first costume change. During his banter tonight two things will become apparent: (a) He really likes the symphony hall (Most bands do it was built to make those on stage sound good wherever you sit) (b) He finds the word Birmingham amusing; saying it out aloud you can’t help but hear it in a Midlands dialect. He probably doesn’t want to say so in case of offending but there’s no worries we laugh at ourselves first here in this neck of the woods. 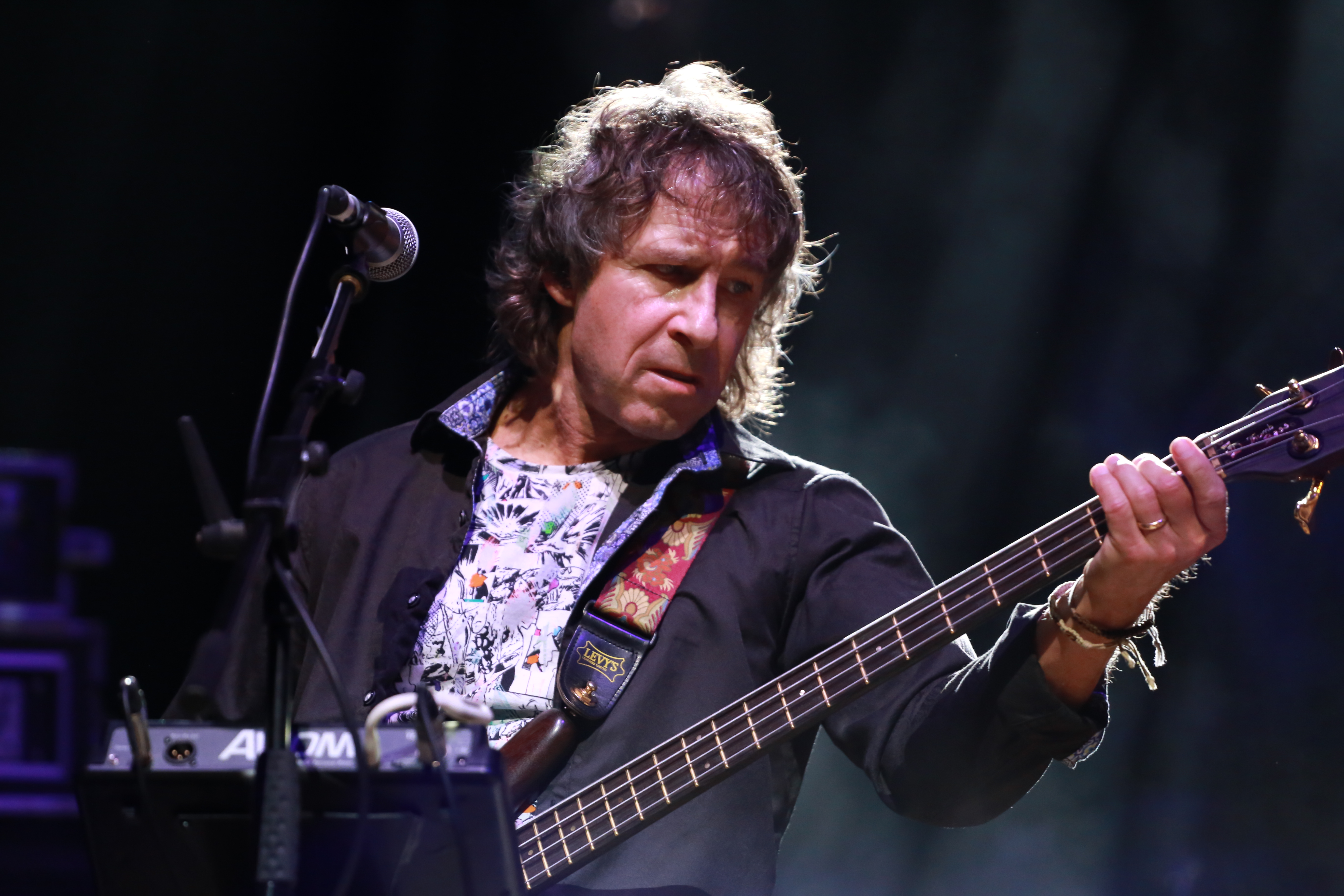 Regardless, things hot up now and not just because women in silhouette move across the back screen like some pop art version of the Bond theme as a dance beat grows, Trewavas playing chords down the high end of his bass. “You are the night” sings Hogarth, and the girl in front of me is obviously moved, growing animated as the singer prowls the stage, the audience clapping along.

“What a great room this is!” he informs us again before introducing Marillion’s friends from the orchestra and sharing jokes with one and all before becoming serious: “This is a song about what power really is and what it’s not about curiously.” The title says it all as another dance groove kicks off with chilled guitar and the string section fills out and Kelly adds funky textures on top. Musically it’s the kind of Euro number Bowie and Queen might have got around to if they had spent a little more quality time in the studio together. Meanwhile in the present, Hogarth sings hovering at the edge of front of stage wile I can only see the shaking of cymbals between hearing the explosive rolls of Mosley’s drums. 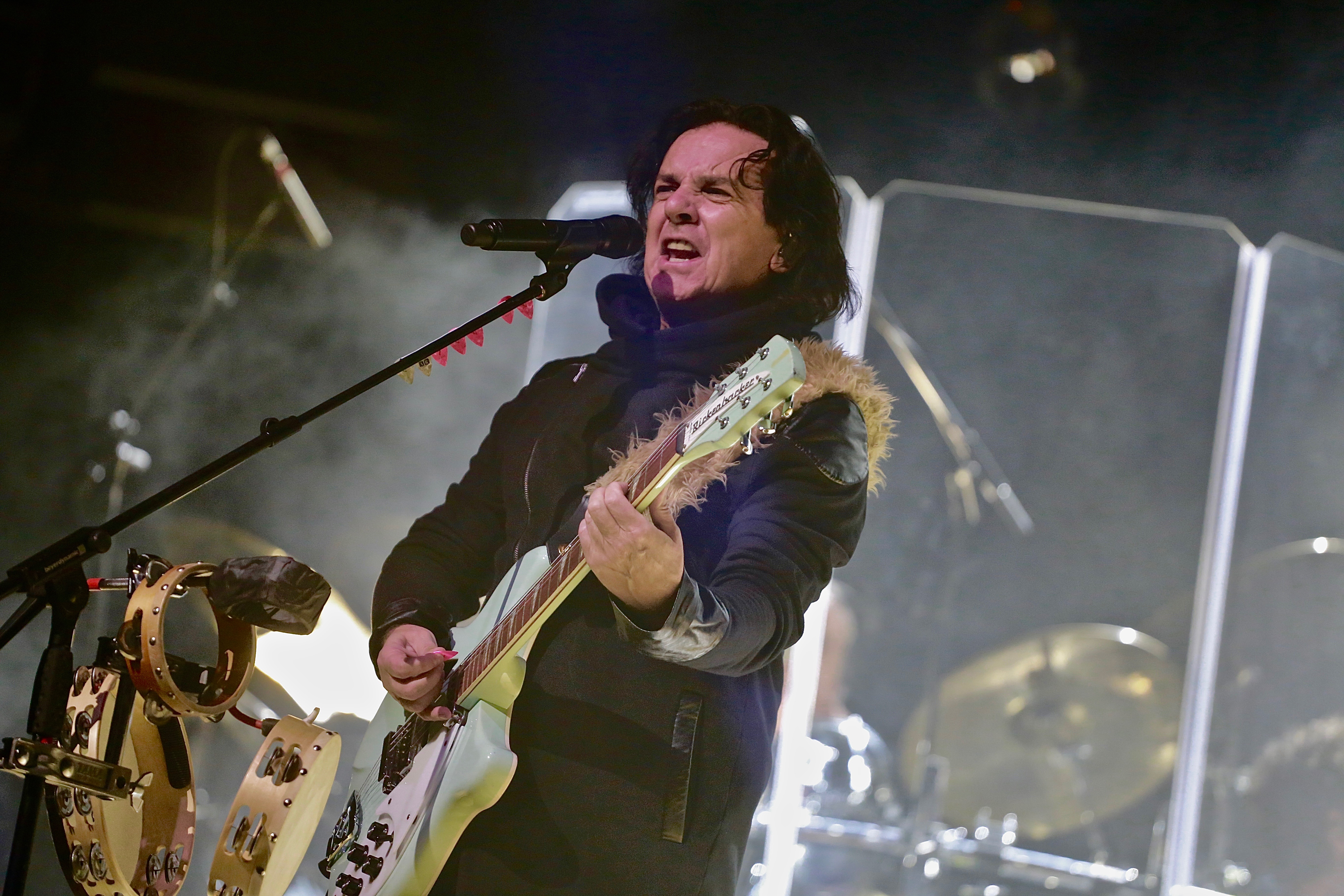 “We are the new kings” offers Hogarth as the epic cycle from their most recent hit album FEAR is unleashed, the backscreen filtering between images representing an alternative world vision of Victoriana and Hollywood during its cocaine zenith. Musically, slow rhythms take melodic diversions, getting progressively heavier as Rothery’s guitar makes constantly inventive fluid tones while never overstating matters, while over on the other side of the stage Trewavas thrusts his right hand down on his strings with such force one seriously thinks Mr Townsend should be notified for when The Who next tour.

It all follows quite seamlessly as a soaring rock chorus is followed by a tumbling progressive shuffle, Kelly broadening the overall sound with majestic pomp.

Not many bands with half as long a career can expect such a positive audience reaction to their latest record as the song ends. 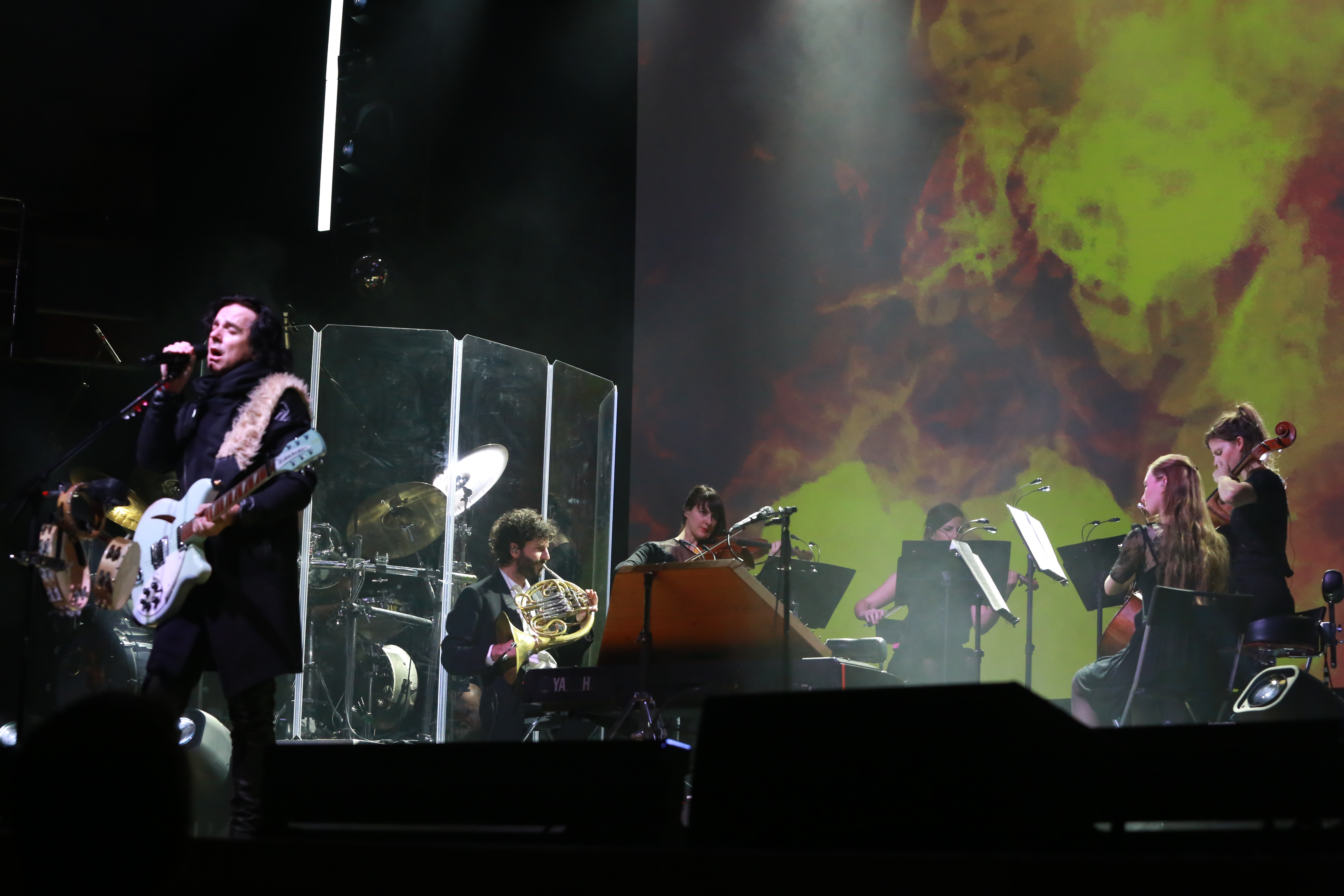 It’s an interesting audience. I’m almost always as interested in those who come to see a band as those playing on stage. Far from feigning vanity here, I’m surprised by how a large part of the demographic here tonight look decidedly older than me, and I’m of an age where I still consider Marillion a new band, after umpteen records. But there are all ages, and a lot of people sitting in close proximity to me who have ventured out here tonight on their own, as with the aforementioned young girl seated in front of me. 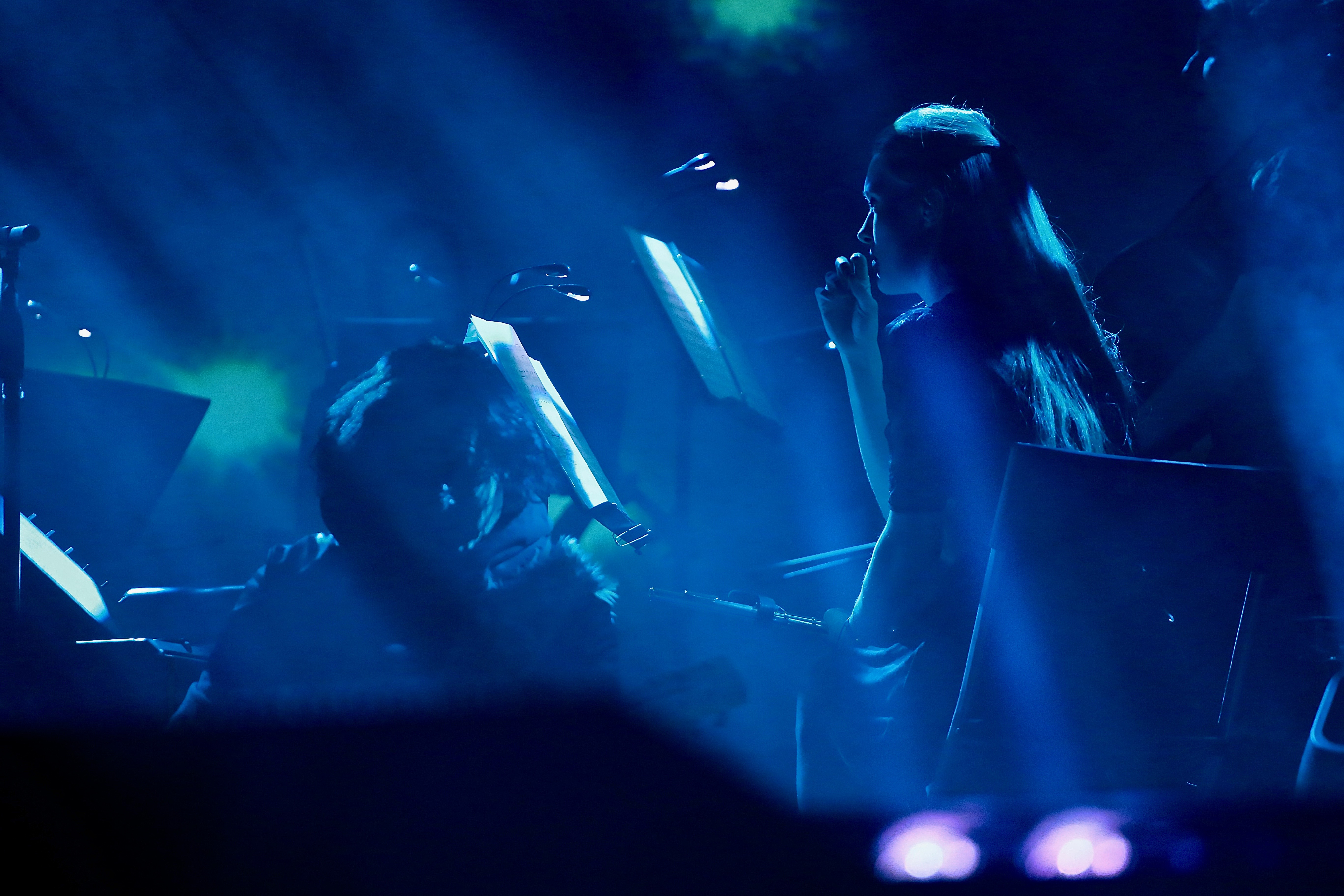 Put the odd fantasy piece to one side, Marillion’s lyrics have always offered the isolated and disenfranchised something to think about. I trust such folk find not just solace but empowering positivity in the music, though I should note the chap seated next to me while a big fan mutters that it can be a bit like being in a cult if you say the wrong thing out loud to others. Though that can be said of a fan base of any sort couldn’t it?

Hogarth relates how he himself the sole British survivor of the tragedy that lead to him writing ‘Estonia’ and the orchestra gamely begin this number, Rothery adding arpeggios on a blue headless double neck before taking it into a rhythmic folky pop vibe that’s wet, warm and inviting before Kelly solos exploratively without arrogance. 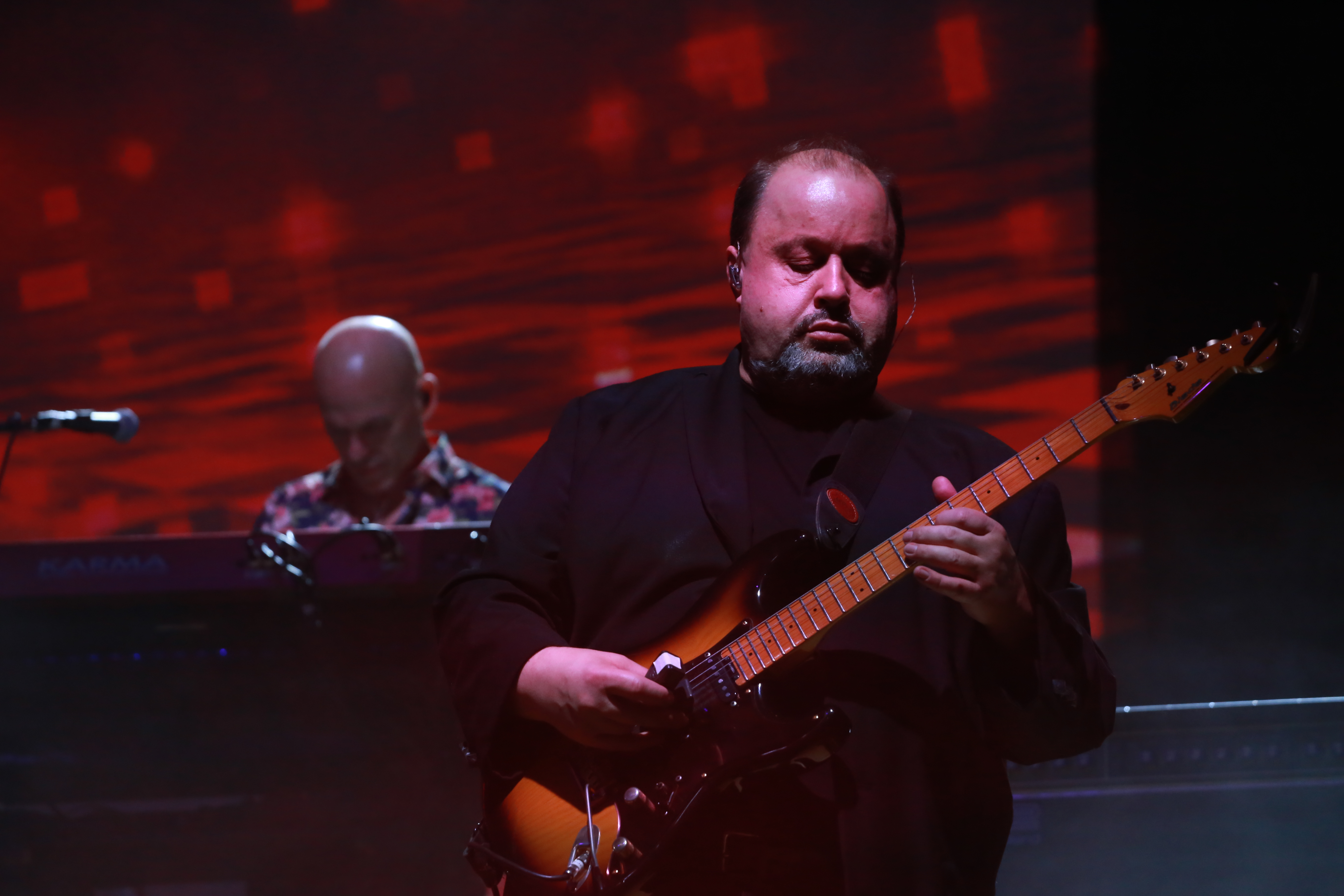 “How many lemsips can you have in a day?” asks the singer as he and bass player trade jokes about the former’s alcoholic preference for overcoming a cold. There’s a remix of the band’s Afraid Of Sunlight but that’s not the reason they intend to play ‘Beyond You’ from it, just that they like to change their set to keep it interesting for everyone.

Strings play over a heartfelt bass, high notes held out long by Hogarth reach ever higher as an eyeball in closeup strains in on us from the screen on stage. As the song takes hold the crowd clap in time with its familiarity prior to an elegiac solo. ‘Seasons End’ is next and then ‘The Sky Above the Rain’ opening with just piano and vocals in a melancholy Beatles manner before guitar notes flitter across their fretboard in pretty clusters.

Hogarth screams out in emotional torture as band rage hard in both discord in melody for the final number of their main set, ‘The Great Escape’. Rothery pulls at his tremolo arm as licks fly out and are briefly held in motion, the flutist taking up the solo melody before the main theme returns and it all concludes in tempered rage. 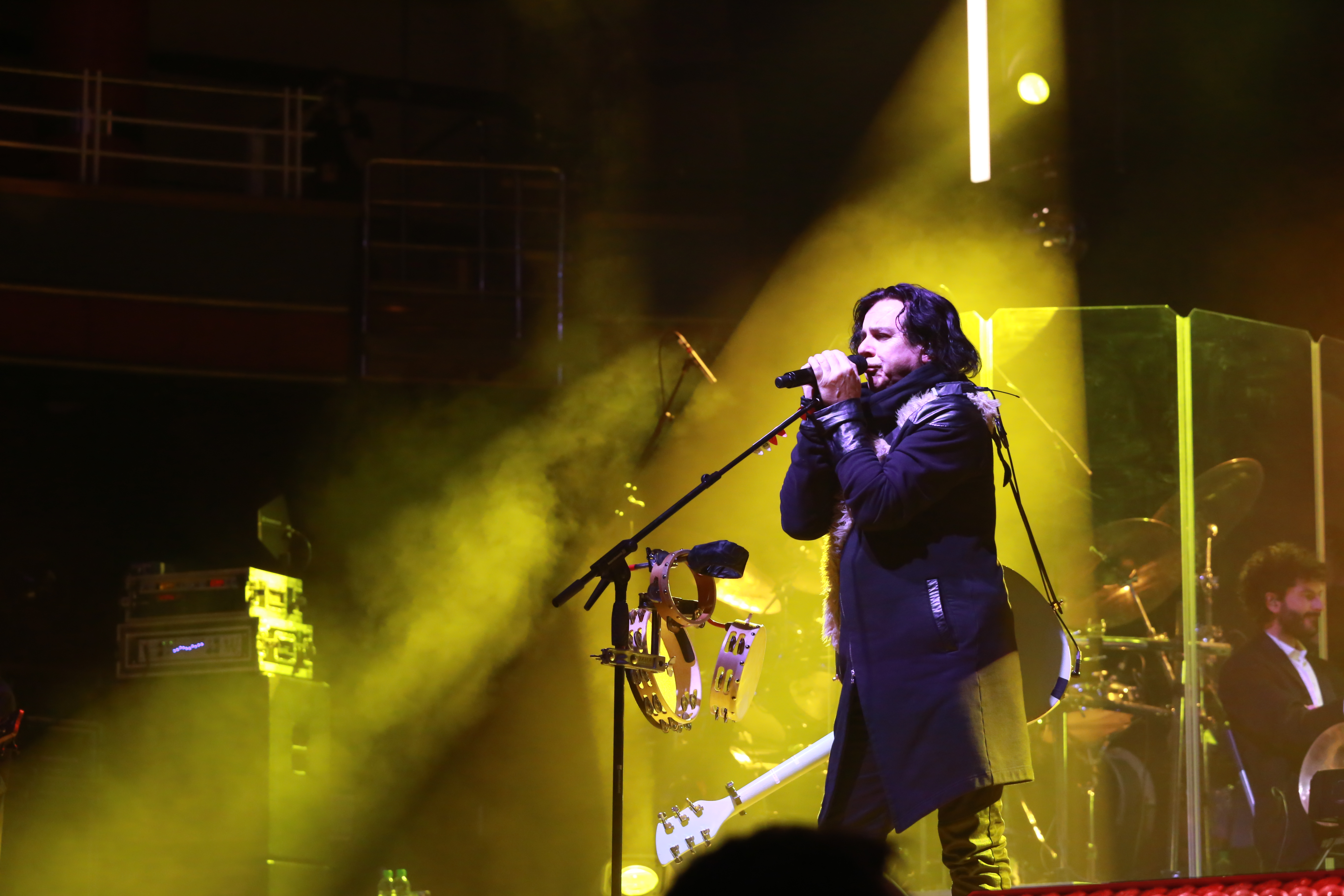 There’s a not inconsiderable wait before the band encore with two numbers. ‘Fantastic Place’ has the orchestra twisting in lively convoluting melody the band thundering forth with Rothery’s guitar affecting comparisons to George Harrison at his most blissed out one minute, Dave Gilmour the next. It’s followed by ‘The Space…’ a showcase for Kelly who shifts effortlessly between classical piano and synthesiser solo that veers the jazzier end of funk.

But it’s not over yet. Leaving stage to return one more final time they perform ‘This Strange Engine’. For those who took earlier advice and downed tools by forswearing playing with their phones all night they’ll have gone home having seen a spingly-spangly theatrical progressive rock show, one where they can see money’s been spent on both set alongside recompensing a bunch of talented musicians. 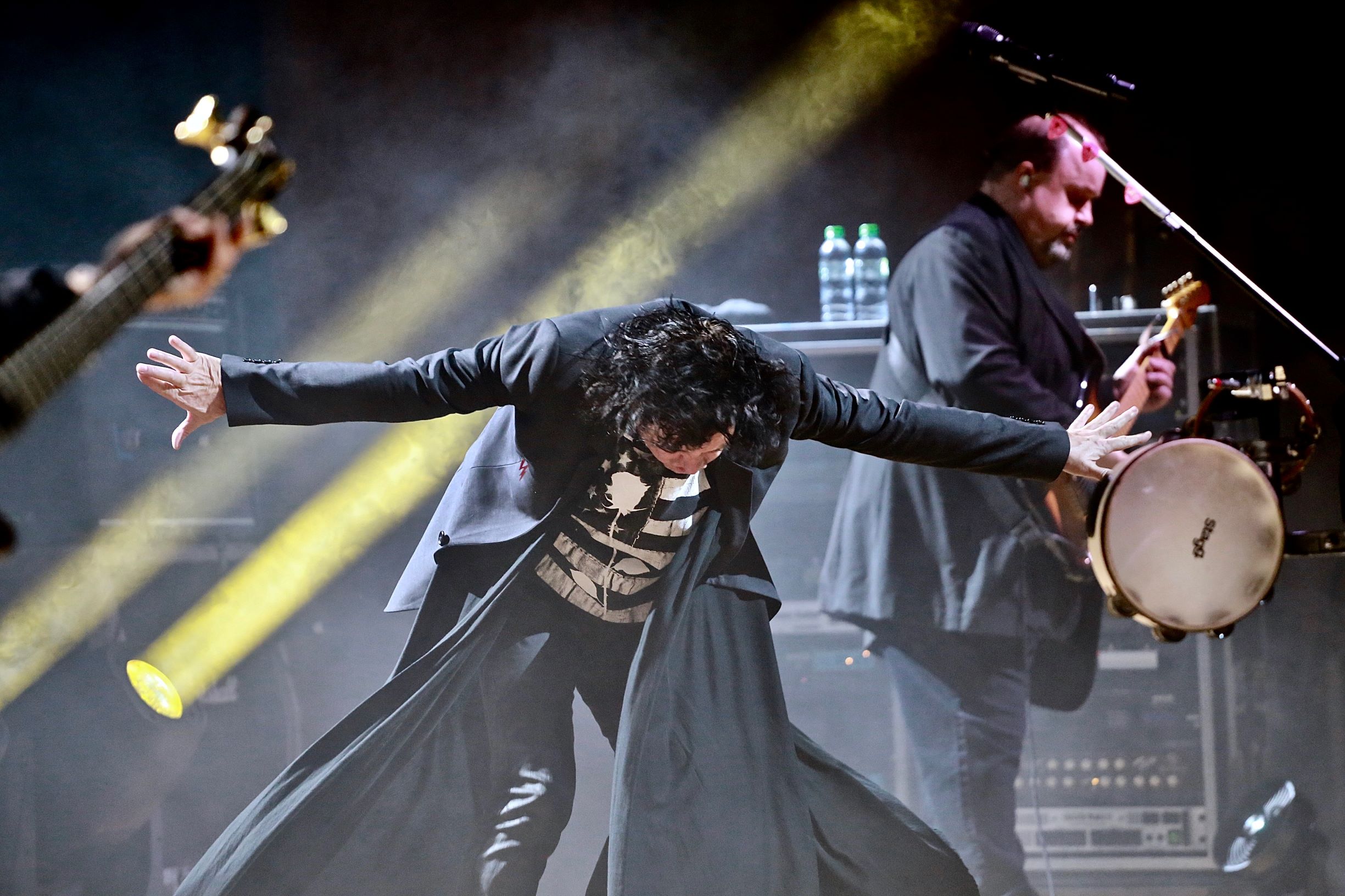