Tonight’s the launch party for The Bad Flowers debut album Starting Gun. The Asylum 2 is sold out; we’re packed in like sardines and the heat is sweltering. These Wicked Rivers start the evening off, then it’s time for Those Damn Crows who are brutal with a hardcore groove while offering a modern US rock vocal approach that swings between Shinedown and Greenday. A little way in front of me, punters are chanting “Stevie!” having clocked Bad Touch’s lead vocalist is in the building, as are former members of Shy among an age group that ranges from young to old. Barmaids in nurses’ uniform may provide eye candy while waiting for a drink, but it’s all for fun and they don’t take any lip. In around 90 minutes’ time Bad Flowers’ Tom Leighton however will become quite verbal…

Starting strong, they follow it with personal fave ‘Who Needs A Soul’. Sure,  it possesses an elongated oddly time riff that somehow still works a treat but it’s lines like “I got a cigarette and I stole it from the devil’s breath” that catch my attention. Phrases whose lineage can be traced all the way back to Robert Johnson laying down songs like ‘Crossroads’. Attitude, spunk, power pop chord changes over a heavy groove and a vintage rock ’n’ roll solo to boot – I just wish I could see the stage instead of the flailing hair of heads banging in time in front of me.

With a staccato opening that begins to feel inspired by both early Queen and Sabbath new song ‘Big Country’ establishes itself. Just as I’m taken with how uniquely English their lyrics can be the tune slows down and Leighton calls out in his finest broad Staffordshire accent: “How are we all, Birmingham?”  The roar says it all, and as if on cue dry ice wafts behind him as he takes a solo, bass player Dale Tonks with him every moment in melodic counterpoint.

As ‘Lion’s Blood’ continues the heavy barrage of sound the band are delivering tonight, I wonder if they’ve forsworn their early somewhat psychedelic influences but the song’s solo puts paid to that thought. Next up ,the extended Zeppelin funk riff of ‘Secrets’ gets one suitably grooving only for them to suddenly shift into what’s effectively triple time;  Leighton cutting and stabbing away frenetically on his guitar before slipping in gentler blues phrases that return us back to the main theme. 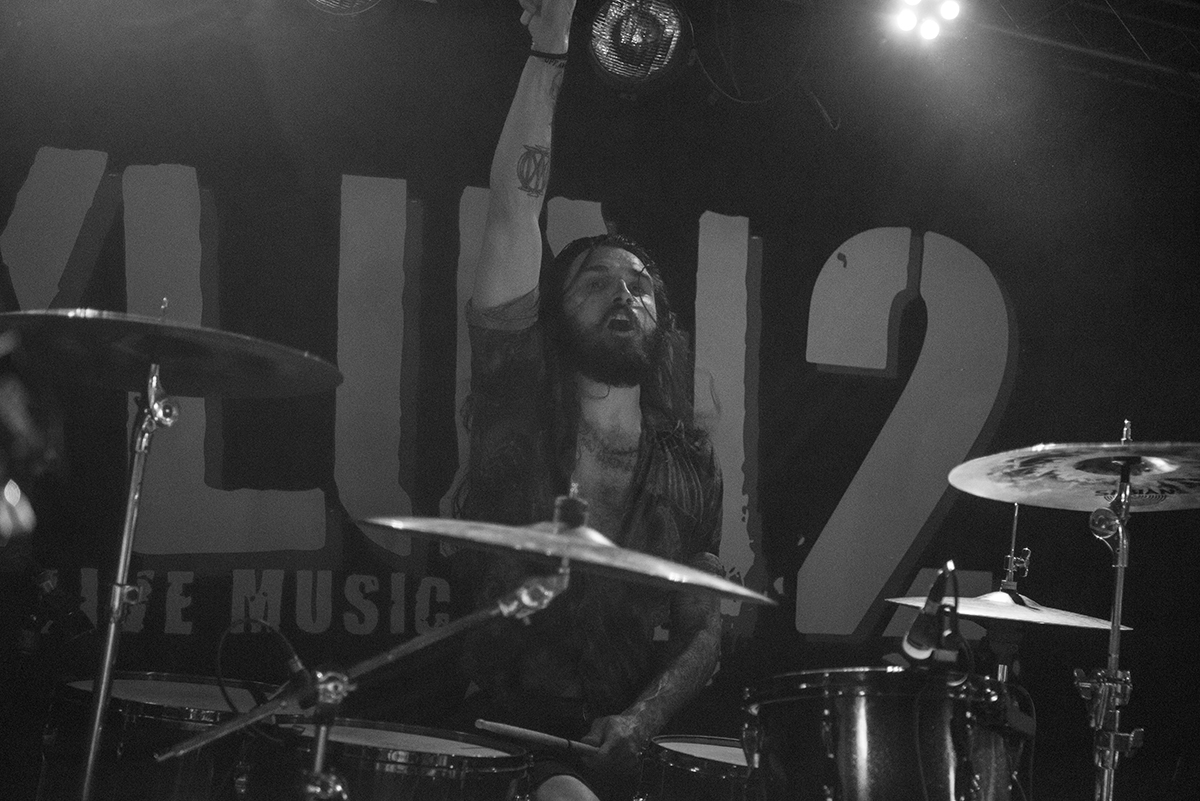 Next up, ‘Let’s Misbehave’  is styled differently to the album version; more of a downer blues and so comes across reflective and mellow in its lyrical approach, at least initially. Karl Selickis is tonight’s man of the match, he’s been inserting jazzy fills here and there but suddenly he really kicks the song into shape, Leighton’s guitar rising to the challenge structured but with feeling, and with wah-wah and echo peals switched on for good measure while Tonks fills in the spaces. Looking back to their first EP we also get ‘Run Run Run’, its heavy blues rock riff mixing with a 60s beat flavour as flanged chords fill out the sound.

‘Be Your Man’ has the pull and shove of Zeppelin with added pop smarts before going into a hard boogie number come the guitar solo, while ‘Rich Man’ keeps our attention courtesy of its octave jumping riff and some glorious bass playing by Tonks under Leighton’s own guitar solo. Similarly Tonks opens the rhythmically fast ‘I Don’t Believe It’ with a bass solo and adds back vocals along the way, while Leighton delivers a psychedelic blues solo to draw it to a conclusion.

When radio hit ‘Thunder Child’ bears its soul there re  pronounced dynamics with symbiotic tight tempo charges from all three, even white lights shoot out from the back of the stage on a head banging audience.  They do change the song however, with an extended instrumental section, and while effective it does begin to feel like an unnecessary jam and they lose some of the potent energy inherit in the song because of it.

Remixed from their last EP and album closer this time round, ‘City Lights’ is also the show’s last number. A good choice as the audience sing along with every word as the song moves from hard rock to a brief funk moment before delivering heavy psychedelic overtones.  An even dozen songs and all three band members have been hurling themselves about, throwing shapes while never missing a beat – Selickis in fact standing up from his drum kit and getting the audience to clap at various points during the show.

The audience want more but The Bad Flowers look out beyond them with a confused look in their collective eyes. It transpires the venue’s sound guy has disappeared.  The audience begin to “Boo” playfully like naughty school children even as a bell rings playtime’s nearly over and the naughty nurses behind the bar call last orders. It’s not curfew time though, and even as I hear the gent next to me disdainfully exclaim “This isn’t very rock and roll” I see management and PR moving with determination to sort matters out while the band, confused, begin to leave the stage, and slowly some of the audience look to drift away too.

These few minutes of confusion look to spoil what’s been a good party for bands and audience alike, only for Leighton to leap back on stage and shout into his microphone: “Right, we’re fucking doing this!” As they pick up their instruments he grumbles that they were going to end the set gently with the acoustic ‘I Hope’ instead with a loud chord, a barrage of drums and anger in every note of their playing they deliver ‘Living The Dream’ – intercutting it with a rendition of Black Sabbath’s ‘War Pigs’ sung by Tonks – and musically everything ends back on a high.

Tonight The Bad Flowers emphasised their taught ability for unrelenting heaviness, at a club on Saturday night when people have had a few to drink it was ultimately the right decision – And they scored brownie points galore the way they came back on stage and delivered ‘Living The Dream’ – Just don’t be fooled this is all they’re capable of; Starting Gun proves their diversity.

But, hey, if all you want is to catch them live for yourself they’re about to go on tour with Jarded James Nichols and Stone Broken, and details can be found at Ramzine by clicking here.