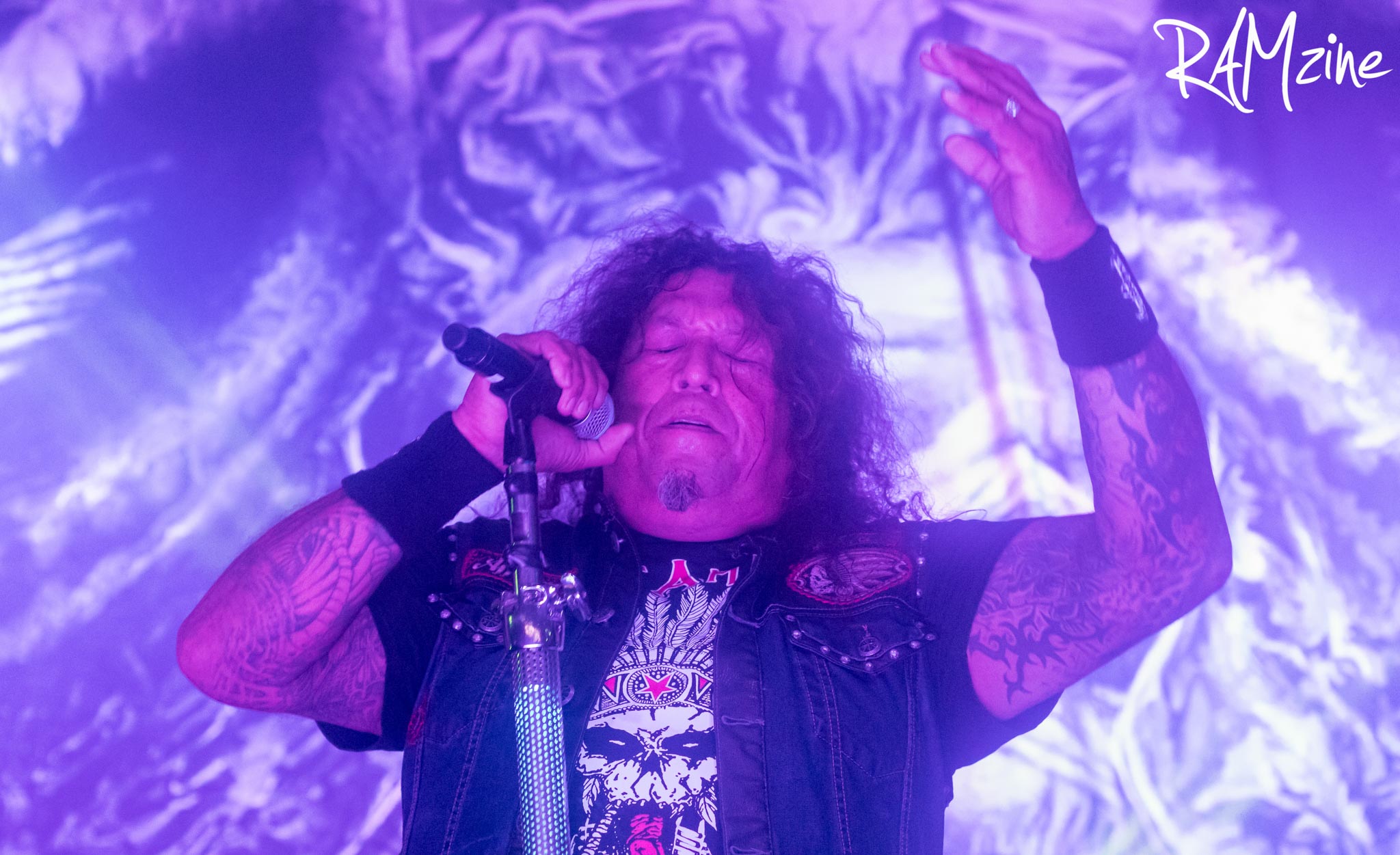 The typical nightmare of the London rush hour, British weather bringing torrents of rain and flooding, and then the break down of two tube trains on route to the O2 all tried their hardest to dampen the excitement of a unique night with one of thrash metals finest. Testament were in the capital and rather than just a night of amazing metal, they came to bowl. As venue doors open, those with VIP tickets have the lucky pleasure of being side by side bowling with the legends on the lanes. Sadly for me, the horrors of travel and weather caused me to miss this fun time and I didn’t arrive until the first band had already taken to the stage.

Broken Teeth were the first band the grace the stage, having never heard them before and my only knowledge of them is reading that they are a hardcore band and support for this gig, I didn’t expect much other than the typical breakdowns in every song and gang shouts etc that you tend to find in many of the hardcore acts these days. Thankfully I was proven wrong, very wrong! The sound of the venue is immense, amongst the best I have ever witnessed, a completely flawless sound, it’s so hard to imagine that first and for most, this is a bowling alley! Despite the vocalist openly stating the crowd isn’t their usual crowd, nor the band the crowds usual band. This didn’t take anything away from them. Fast paced, aggressive, and despite a rather static band presence, the vocalist charged around as though to hype the crowd up before going into battle. As the crowd grew and grew, so do the love from everyone for the band. Heads were banging everywhere and by the end of the set, we all seemed to accept this band as one of our own. If Broken Teeth got anything our of this gig, it is a huge boost to their fan base. One I’ll be checking out more of.

While awaiting Savage Messiah, I soaked in more of the venue. In theory it shouldn’t work, it’s a bowling alley, and a damn nice one at that. Very American as the name suggests, Impressively designed and one through the entrance and entering the actual venue it opens right up. The stage is right in front at a good metre high giving a great view for anyone to see. A great bar running the entire length of the left side of the open plan dance floor and the bowling lanes to the right of the floor. Very classy chesterfield leather sofa’s grace the lanes with a seating area just to the side of the stage that sits with a huge screen that during the live bands, gets streamed from multiple cameras throughout the building. Smaller screens placed over the lanes above the pins are used for bowlers to watch the performances too. Brooklyn Bowl is the dream kind of venue you’d have if you won the lottery.

After enjoy a few pints at the bar, Savage Messiah brought their flashy British thrash to the masses, having seen these many times from small stages with a few hundred capacity venues, to the main stage at Damnation festival, and then the main stage at Bloodstock, they have grown steadily and built a great following. All taken well in stride, this is a support slot they deserve. Thundering through their set, with ‘Cross of Babylon‘, ‘Hellblazer‘, ‘The Fateful Dark‘ to name a few. Outstanding as ever, this is by far the best performance I’ve ever seen of these guys. If you haven’t, they are supporting the legends Armored Saint July 14th at the Underworld, a gig not to be missed! Their hypnotic performance is over in the blink of an eye, they could have played for hours and I don’t think a single person in the venue would complain!

Testament was getting ready to take to the stage next, the crowd growing by the night through all the delays and travels issues of which none seemed to matter any more, were ready. Chants of Testament breaking out everywhere, the place is brimming with excitement. As the Gods take to the stage, the place erupts, as if the bowling wasn’t good enough for them, they put on a superb set of classic fan favourites covering all the years. Three years since the release of the ‘Dark Roots…’ album, the hope of something new had crept into my mind, but despite that, only a few tracks from the last album, and a small technical issue with Alex Skolnicks guitar halfway through the set, this gig proved nigh on impossible to be at.

‘Over the Wall’, ‘Rise Up,’ ‘The Preacher,’ ‘Dog Faced God’, ‘More Than Meets the Eye’. They were all there. It turns out to be Chuck Billy’s birthday making it all the more special for the dominant vocalist, the pleasure of being in such a great place is written all over his face and he has the crowd eating out the palm of his hand. On fathers day I felt and stated that The Melvins had possibly pinched the title, or were at least in the running for gig of the year at The Koko, Testament held back no punches at shot that idea clean out of the sky, without a shadow of a doubt they have for me at least claimed that title, nothing will be able to surpass this gig. For those that missed out, for shame on you! Maybe you can get some slight redemption by purchasing the ‘Dark Roots of Thrash‘ bluray/DVD box set. (You should buy that anyway!). This was above and beyond anything you could ever imagine to experience though!

Staff, the Brooklyn Bowl, all the bands on the line up, they have pulled the unthinkable and made the most impressive night and display I have ever experienced and I cannot see anything surpassing this, I genuinely can’t!