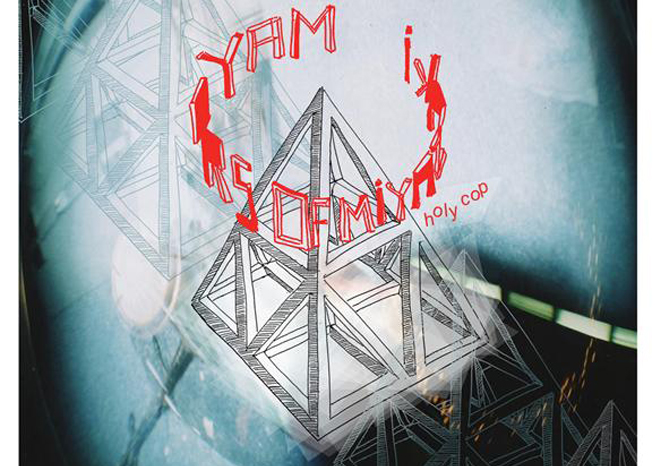 After taking time out to focus on other commitments, London based math-punkers, Mayors Of Miyazaki are back with their second full-length album Holy Cop. The London based trio (including Silent Front drummer Gareth Thomas), have produced their latest achievement via We Be Records after having the album recorded by Harvey Birrell (PJ Harvey, Shellac, Cat on Form). Expectations were therefore unsurprisingly high and rightly so.

Holy Cop is a constantly energetic album mixing quality math-rock with an almost punk-pop undertone, surpassing the bands former success with their debut album Buffalo (2008). It’s an album fundamentally composed of occasionally screeching yet always harmonizing two-part vocals slung over some catchy and upbeat riffs to create a clean cut and accomplished album that will fill your ears with those party summery vibes. The lyrics in track ‘Dry Hands’ can back me up there!

“We make the most of sunshine, we may have all the sunshine. Don’t take too much to make us, part of this apparatus.”

Opening track Souvenir is the perfect introduction of what’s to come. Girl/boy vocals fight their way through a track composed of a mismatch perfect match of constantly changing guitar riffs and a safety net baseline that keeps the track on track. It’s this exciting showcase of technical skill and execution that highlights Mayors Of Miyazaki capabilities. This theme continues straight into track two, Start After One (a stand out of the album for it’s enthusiasm and technical ability) and continues through Sugar in the Fuel Tanks and Tongues, which all sit somewhere comfortably between hardcore drum beats and a series of captivating punkrock riffs.

The album does have a few pace changes with the introduction of track five, Parts Per Million sounding a lot calmer and then again with Human Resources and Muy Sexo providing a more up-tempo punk feel. However, the joint vocals crucially maintain a familiar pace and feel throughout the entire album making Mayors Of Miyazaki tunes instantly catchy, recognisable and sing-along classics. One of the most exciting qualities about this album is the consistency of the quality even through though the diverse range of sounds created. The more you listen to it, the harder it is to pick out faults, or those tracks that don’t quite make the grade. Essentially, it’s really good.

Perhaps the only disappointment of the album is it doesn’t quite end on the high it started. After the bulk of track ten Mortise + Tenon is over, there’s an almost unnecessary and arguable irrelevant minute long instrumental that wouldn’t sound out of place on an arcade ghost train. However, it’s not enough of a fault to downgrade the overall dynamic and engaging feel of the rest of the album.

And check out the official video here: