DVD Review: Michael Schenker’s Temple Of Rock – On A Mission: Live In Madrid 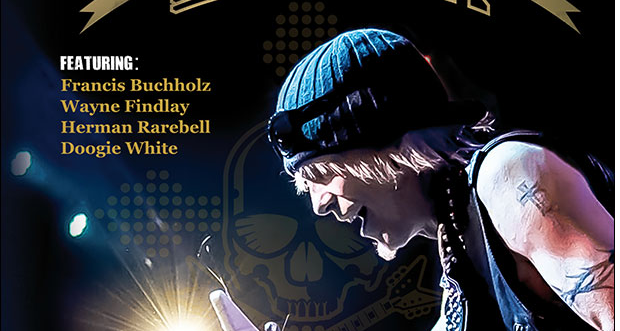 German guitar maestro Michael Schenker sat beside me in January 2016 with a handwritten set of New Year’s resolutions that went something along the lines of: (1) Ensure Temple of Rock UK Tour is so good we leave them begging for more, (2) Release live DVD recorded in Spain so the rest of the world can see it and beg for us to tour, (3) Consider making new recording for release to coincide with future tours. In other words, there is no retirement plan. That UK tour demonstrated the blond bomber is reborn, playing well with a tight well-honed band in tow.

We can but contemplate what six-string wizardry Schenker is casting right this moment, for he achieved what he intended – and more besides – on that UK tour, and now we have On A Mission: Live In Madrid to stick in our various multi-media home facilities, lay back and enjoy.

For those of us who caught Temple Of Rock during their UK tour, the set will be fairly familiar in its run through but there are also distinct differences. Let us take the concert’s opening sequence as an example: Lights swirl over an empty stage as music announces the night’s event is about to begin. Then the cameras pan out across the theatre, stretching out and up to present several rows for the gods, and such is the size of the venue we acknowledge that in Spain the multitudes don’t just respect Schenker they get up off their backsides and go see him live – While his UK tour was sold out like so many other quality acts they’re not playing the size of venue here they should be here.  If this DVD can in fact get fans off their couches and out to see bands live again, then chalk that up as a job well done.

As the cameras return to the stage, one by one The Temple of Rock walk on and Wayne Findlay calmly standing at the electric piano strikes out a familiar pattern as from offstage a guitar picks up on that melody and takes it forward into the lead intro for UFO classic ‘Doctor Doctor’. Schenker hits the stage, his playing fluid and delicate, a single finger slides up his flying V’s fret-board and he breaks out into the song’s famous chord sequence.

A variety of camera angles are already in evidence, from aerial viewpoints to upshots, with one roaming about onstage, another off in the crowd, and one permanently fixed above Herman Rarebell’s drums. They cut fast between members of the band, suiting the tempo of the number.  Schenker is all smiles and Doogie White in fine vocal fettle, and follow through with Man On A Mission’s ‘Live And Let Live’.

Lights Out’ lacks a bit of oomph early on but it’s played well and watching Schenker’s hand in close-up one can pick up on the nuances of his playing, then as the song gets harder and we’re into the main solo looking at what he’s doing on his fretboard I’m sure there will be others who think: “Well, that doesn’t look that hard.” But could any of us get half as a good bloody sound if we spent the rest of our lives trying? Not a fat chance. All the little runs and added tweaks are most melodious – And that’s probably the other thing that’s a noticeable difference for playing here the band offer a sweeter sound, whether that’s the Spanish heat, adapting their sounds for this nation’s musical preference, or just chance I have no idea. Come a third guitar solo Rarebell is hitting his drums hard as Hell while looking cool as a cucumber.

‘Where The Wild Wind Blows’ is more mid-paced and the cameras slow down appropriately while for ‘Natural Thing’ we see the band bobbing down the front with their guitars – If it looks a bit like daddy dancing the music makes up for it, with some lovely piano and a broad  brash rhythm guitar pounding out with a really fresh take on the solo, even if it is only a couple of bars long. Findlay’s keyboards are again to be noticed on ‘Before The Devil Knows you’re Dead’ that White dedicates to the late Ronnie James Dio, and after that he’s explaining that the “Wee little men floating about” are recording the concert before they play MSG debut’s ‘ Victims Of Illusion’.

As a series of hammer-ons make seagull noises the cameras aptly look up into the sky and out to the gods, returning as a flurry of feedback delivers The Scorpions‘ ‘Lovedrive’ with Doogie rolling his Rs as he sings “R-r-rocking down the highway.” The guitar line-up returning stage front for ‘Coast to Coast’ the camera offers a good viewpoint to witness Schenker’s chord/lead combination playing style. He also duets with Findlay on guitar, then extends his own solo extemporising with added feedback/power chords that rather excites the crowd who keep going “Ole”, then takes his guitar into further creative areas.

‘Vigilante Man’ is prime Quo boogie with added modern synthesiser, ‘Rock My Nights Away’ is melodic AOR and has a tender little moment as the camera cuts to the audience where you see a couple hugging as they headbang away.  Things get decidedly heavier for ‘Saviour Machine’ albeit that Doogie’s got his hands on his hips as he delivers an amusing narrative leading into it as Schenker arms himself with a twin neck Flying V form – It looks awfully cumbersome to play but you can’t complain about the way he handles slide on it, camera angles also shifting so you can see his footwork between effects pedals. He keeps it weighed round him for ‘Too Hot To Handle’ wherein he sings into Doogie’s microphone and they follow it with a melodic version of ‘Only You Can Rock Me’, the singer adding the line “Kicking out like Herman’s Hurricane”  and that itself appears after a strident ‘Lord Of The Lost And Lonely’.

Doogie’s sings the opening lines to ‘Rock City’ a capella before changing it to ‘Rock Bottom’ and they’re off in a fast take on this mighty hard rock classic slowing down for the instrumental section that’s a joy to watch – Even Schenker can’t take his eyes of his own fretboard on what is a voyage of discovery, seemingly wondering how holding a trill just that little bit longer might sound and whether adding new pattern in a bar’s time might make it all the more profound. This is the part where it becomes an extended master class, but also so endeth the lesson.

Returning to encore, Doogie asks everyone to take a moment to ponder over those who’d suffered terrorist attacks on mainland Europe during last year. He handles his role well, this Scottish lad; stands comfortably without airs and graces, cracks jokes and has a strong repartee with the audience alongside his vocal talents. The slight stomach paunch is endearing, as are the intermittently bowing legs of Schenker and Francis Buchholz, though they’re both in good nick though the transformation of the bass player from Worzel Gummidge hippy in old Scorpions photos to dapper Roger Moore lookalike is quite profound. The Spanish fans are not short-changed on encores, and there’s a definite party spirit in flow for them, starting with the fun rock boogie of ‘Horizons’ during which Schenker bestows plectrums on the audience like a priest would a holy wafer; then following a bluesy intro they romp though ‘Attack Of The Mad Axeman’ then tear it up during the solo, with the rhythm section coming on strong, and call it a day with ‘Communion’ and ‘Blackout’ as they race round the stage. Rarebell thanks everyone for coming and imploring them to get home safely as ‘Searching For Freedom’ comes on plays over the closing credits.

The DVD also features a couple of extras: Soundcheck Sketches features the band in stage rehearsal, it’s basically a sound check with partial run through of both ‘Rocky My Night Away’ and ‘Only You Can Rock Me’ but more interestingly a jazzy blues jam lead  mainly featuring Findlay, Rarebell and White. More fun are the Outside Theatre Scenes where Doogie White is spotted outside watching the queues coming in, gets kissed, and ends up with half the crowd having selfies taken with him.

On A Mission: Live In Madrid comes available not only as a DVD, but on Blu-Ray and as two audio CDS. 22 songs played well, excellent close-ups, fun moments, and Michael Schenker on top form. I am a fanboy reborn and frankly, I don’t give a damn.