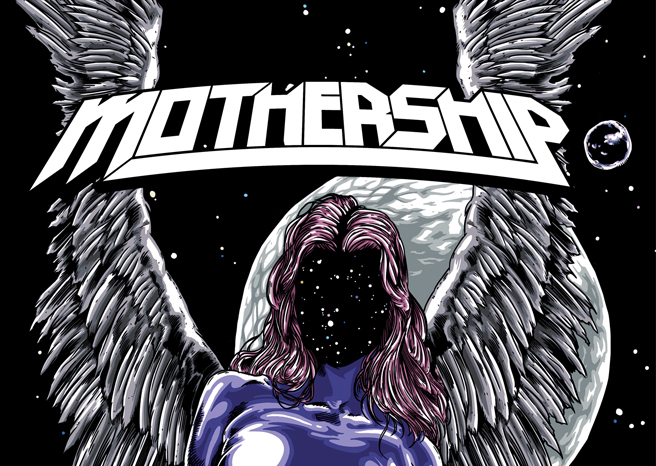 Mothership wear their influences on their sleeves, it’s in everything they do, every riff, lick and bridge is simmered with bands like AC/DC, UFO and Black Sabbath.

The self-entitled eight track EP is as follows:

We open with a sort of spaceship-feel (don’t laugh) and it actually immediately puts me in the mind of ‘Black Sabbath’ by Sabbath with the slow build and throbbing, deadly riff. It’s then punctured by some crisp riffing and fantastic scales. The song then builds to even higher grounds with a rolling, thumping drum beat. The song is called ‘Hallucination’ and it’s purely instrumental, for me any song that doesn’t have singing has to have even clearer, tight playing to hold your attention and Mothership certainly deliver with that.
‘Cosmic Rain’ feels like we are in some steamy bar filled with Buds and hairy bikers, it rolls and licks through some very taut playing. Kyle Juett needs to be stronger and braver with his vocal choices, speak-singing through this riff lets the great pounding beat from Judge Smith drift.
We are treated to more cranking riffs by the Juett brothers and simplistic lyrics, as we are told Mothership like to ‘drink a lot’ with ‘loud guitars’ and, of course, remind us that ‘rock n’ roll is insane’. ‘City Nights’, however, is not a classic.
Heavy feedback brings the beginning of ‘Angel Of Death’ and it boasts some great fretboard skills from Kelley Juett and atmospheric drumming. This sounds like a Rainbow outtake, which is a compliment! Juett’s voice growls brilliantly through the verse and bridge but harmonies aren’t the strong suit here.
‘Win Or Lose’ has epic written all over it and it does deliver with its swirling solos, well-paced beats and grinding bass line. It certainly does have more teeth than, say, Wolfmother, but the true feel of this track would be best felt live.
It doesn’t let up in Mothership’s world and ‘Elenin’ has a cracking bassline which reminds you of an out of control train speeding down the tracks! It’s muscular and bold, but the riffing deserves more oomph.
‘Eagle Soars’ is definitely a highlight of the album, despite the title sounding dated – and by now we know we are going to get some rather cliché lyrics but forget that for a second and just listen to the punch and power of the threesome rhythm section, it is tight!
Mothership finish with a rather appropriately titled track called ‘Lunar Master’ it’s a typical track of this lot with chugging riffs and drumming that is very high hat happy. I would highly recommend going to see Mothership play live, as I just don’t believe that the EP does them justice.