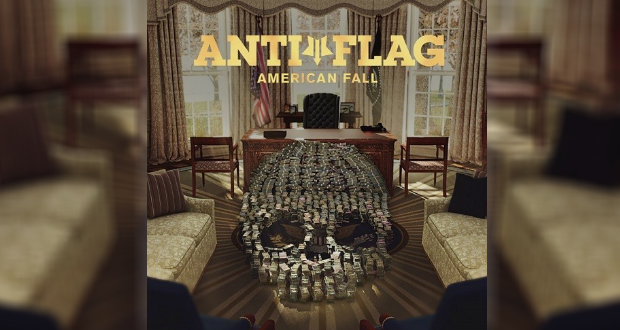 If there was ever a year that called for an Anti-Flag album more, 2017 is surely it. We’re not going to bullshit you about the political climate, the instability of the fabric of society, or even the fact nuclear war is only a miscalculated sneeze away. We all know this and it is terrifying. The only thing that can truly keep humanity from becoming less and less human: empathy and compassion. Anti-Flag have always advocated this and American Fall is the penultimate bubbling over of all these frustrations that we sometimes feel totally powerless to change.

Looking back on this year, more and more bands are expressing their justified frustrations on issues that society would rather us all forget about or ignore completely. Most notably when Architects vocalist Sam Carter called out sexual harassment at one of the band’s shows that he witnessed first-hand. It’s worth noting that Anti-Flag have been doing this for two decades, firmly establishing themselves as activists and musicians. Having worked with organizations such as PETA, Amnesty International and Greenpeace to name a few. In an age where hashtags qualify as making a difference, American Fall is a statement that will have you inspiring real change where it really matters, by starting with ourselves.

American Fall marks the 10th studio album in a much-celebrated catalogue of political punk mayhem. It may not have the tooth grinding edge that some other fundamentally minded bands like Stray From The Path express, but the gateway to their message is wide open as this album is brimming with nothing but belters.

With choruses that have you mouthing the words after the first listen, this record does not let up. Anti-Flag have a huge point to prove, now more than ever, and by Christ, they aren’t going to waste it on fillers. From opener ‘American Attraction’ to the penultimate ‘Casualty’, we’re struggling to find a single track that didn’t embed themselves in our brain for days on end.

Produced by the band’s manager Benji Madden, the aesthetic fundamentals of punk are all present, which span from the ska-inspired ‘When The Wall Falls’ to the all-out bass-hammering assault of ‘Liar’, courtesy of one Chris#2 [Chris Barker]. American Fall doesn’t outstay it’s welcome and is so easily digestible. They say that all ideas can be summed up in a single sentence. In the case of Anti-Flag: The world’s fucked, so let’s fix it!

American Fall is out November 4th via Spinefarm.