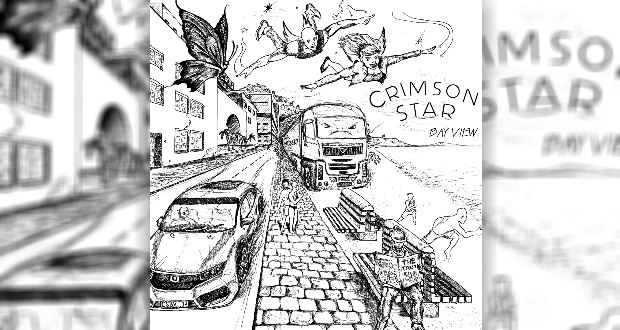 If there is one description that hits the nail on the head with Crimson Star, it must be the words ‘hard rock’ but also add in ‘melodic’ as ‘The Pragmatist’ begins. Its bludgeoning melodic encounter is not only pumping magic but it blows your mind into a pleasurable void as you listen to the hard hitting bass and seamless shredding – this is mighty powerful stuff!

Another keen and eager smashing track is the feisty ‘La Prom’ it holds a superb magnetic pull that allows the listener to wallow in its glory as it is pumped from the speakers and embeds itself into the ears with a badgering force with oodles of charisma.

‘Once’ is yet another ear bashing tale of rock and heavy vibes but has a lot more mainstream vocal at the start, however, it isn’t all low key which is a good thing as I love something with a crazy beat – something move to and this one is growing on me at fast rate.

‘Euthanize Me’ starts with a sneaky bass and then some thunderstruck smacks on the drums, but then the temperature drops slightly to show diversity but soon picks up and raises the heat once more, however, I am not a fan of the low key moments they appear a bit miserable truth be known.

Finishing off this 5 track EP is the track ‘Gimme Some’ which the band do with no exceptions and adding a keyboard into the mix which lifts the melodic temperature to very hot indeed!! Loving this track as it throws itself into some kind of raging oblivion – the gravelly vocals simply make this track stand out as being superb.

The hardest thing to bare on this EP despite track-4 being a bit miserable, although with a track title such as ‘Euthanize Me’ it probably isn’t too difficult to understand why the band have opted for a lower key, but the rest of the EP is hard rock grit and determination that kicks like an angry mule!

I was quite surprised they came from the West Midlands thinking they would come further afield like America so it is good that we have not lost all talent for hard rock in the UK, although somehow some bands further afield sound more polished and rehearsed. However this is one UK band that does possess true grit and determination and can stand behind their genre proudly.