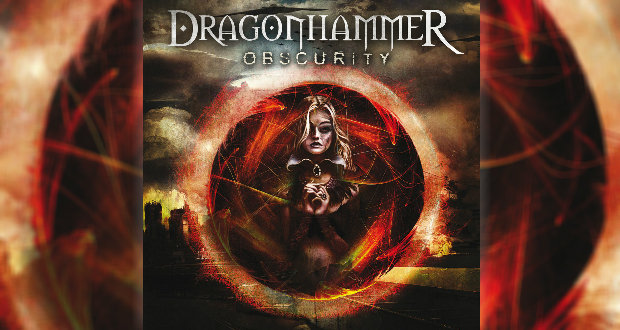 Dragonhammer is a five-piece Italian band who’ve been around for fifteen years and have become one of Italy’s unsung power metal heroes. They’ve released several albums in their time together and, according to their label Magic Kingdom, “Obscurity is the album that will be the band’s definitive consecration into the international scene”.  Even allowing for the very odd usage of the term ‘consecration,’ (did they mean to imply elevation ?) this is a bold statement to make. So the question becomes .. does the music justify the marketing hype ? Is this the album which will see Dragonhammer making the breakthrough? Obscurity is an album where many of the songs lean towards a mix of almost commercial classic rock, coupled with a prog rock sensitivity in the way keys and tempo’s change, though they’re also a few nods towards thrash metal.

The album opens with ‘Darkness Is Coming’, which is reminiscent of the music to one of The Avengers Civil War films, and then leaps straight into ‘Eye of the Storm’, a fast and furious outbreak of riffage powered by some manic drumwork from Andrea Gianangeli.  Similar tracks in this vein include ‘Game of Blood’ and ‘Fighting the Beast’, both being full-on thrash workouts with some amazingly fast driving riffs and bass drum.

But, for a band whose rep derives from playing power metal, there’s isn’t too much in the way of real power playing here. To be sure, there’re some really good driving riffs and some quite delightful blasts of guitar histrionics, but this album veers closer to being a commercial rock album than power metal. This can be heard in tracks like ‘Children of the Sun’, which by the standards of the tracks above could almost be a ballad, and it has the feel of a song someone like Europe could easily be performing. The actual power ballad, ‘Remember My Name’, is a good song but one which’d benefit from having another more sensitive voice singing alongside vocalist Max Aguzzi, so as to better convey the emotion intended in the lyrics.

I would suggest this album isn’t going to be the one which elevates the band up into the international community. It’s a good album and, for fans of the genre, there’s plenty to enjoy here. But it’s highly unlikely to tip the scales any further in Dragonhammer’s direction than they already are.