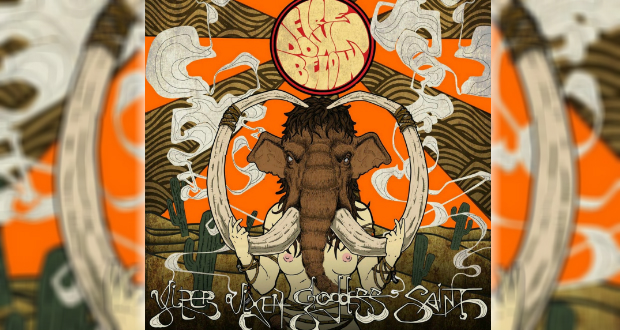 ‘Viper, Vixen, Goddess, Snake’ is stoner rock but on a different level, taking all we know and love and putting a bit of a spin on it. With an intro that takes you steadily by the hand and then throws you into the in your face assault of fuzzy riffs and battering drums of ‘Through the Dust and Smoke’. The psychedelic interlude of the track just feels right and does enough to instantly make you a fan. As the album progresses, It carries on that awesome, addictive sound but opens it into a higher level with most of the tracks punching over 6 minutes. ‘Roadburner’ has the sound and feel I found in Steaks last release, something I do not say lightly! The perfect soundtrack to slamming your foot to the floor and speeding off into the distance in explosive fashion.

‘Universe Crumble’ travels slow and gentle, building eventually into something from the world of Kyuss, but on steroids, after a while the vocals kick in and really take the song to new heights to lose yourself in. ‘Dashboard Jesus’ takes on that Steak feel again before the gentle ‘Resurreccion’ interlude comes in, despite its distinct stoner feel, it has a little Nola sound to it that reminds me slightly of Down, no bad thing at all. ‘Viper, Vixen, Goddess, Snake’ finishes in huge style at over 11 minutes, fittingly called ‘The Mammoth’ , this beast grows and smashes you through wall after wall, raising its game time after time, they know exactly how to write and take you on a ride of a lifetime.

For such a small band, Fire Down Below have created a massive album that fully deserves their thrust into the open world, psychedelic, stoner, hints of groove, this is an album that provides much more than you could ask for, and I cannot wait to witness what the band do next.