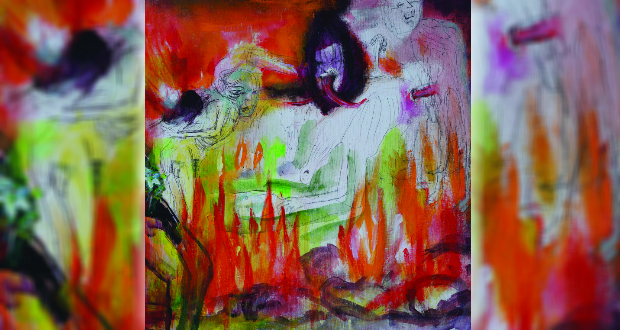 Fleshpress’ latest release Hulluuden Muuri is the band’s seventh full length release since they formed in 1998 and it is clear that the band are out to make their listeners feel as uncomfortable as possible with this album.
The album artwork alone should give an idea of the things that lay ahead, with a distinct Gene Simmons looking head over flaming coals giving the perception that this is not going to be an easy listen. The album delivers exactly that but the album goes through ups and downs like a roller coaster.
Highlights include the first track ‘Lunastuksen Ajan Veren Riitti’ which starts off screeching and provide awkward sounding guitar solos which accompany chugging backing riffs to get the album off to a good start and ‘Siintaevaen Totuuden Haeikaeisevae Kajo’ which sounds so grotesquely evil that I would not recommend listening to it just before you go to sleep but then that is a good thing since that’s what Fleshpress are all about.
It’s not all good however. ‘Hulluuden Viiltaevae Lasipinta‘ is testing simply because it takes almost five minutes to get to any meaningful instrumentation and nearly six minutes for any vocals to kick in which is odd considering the song is only seven and half minutes long and ‘Oikeamieliset’ doesn’t bring a huge amount to the table for it to be worthy of being it’s own song. Finishing the album I was also left with a sense that the sound on the album overall just wasn’t quite heavy and sludgy enough to allow it to be considered a great doom metal album in my opinion.
What Fleshpress have delivered here is a solid effort, but one that falls short when compared to some of the records that the bands peers of the genre, such as Indian and Woods of Ypres, have released and as such ends up being disappointing as the ingredients to make an excellent record are there, but the band just need to find the ways to put them together.
Share
Facebook
Twitter
Pinterest
Linkedin
Email
Print
Mix
Previous articleCourtesans “Stay true to yourself, it does pay-off” Bloodstock 2017 Interview
Next articleReview: Helpless – Debt