There is one thing I love about this band and I haven’t even heard them yet! And that is their ingenuity for using the Binary system to create a biography and numbers to name band members! I haven’t had the time to translate the Binary (as yet) but I wouldn’t mind better it says “Highly recommended”. Now let’s get down to business! 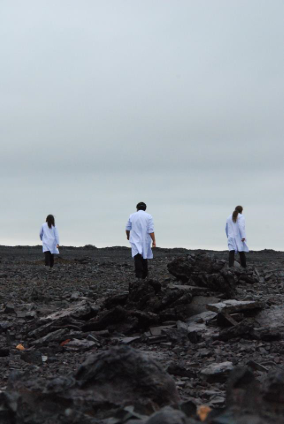 On delving into this maelstrom of deep dark atmospherics it is pretty clear that this band know their metal and equally so their mettle. The gangrenous biting metal is prevalent and eats away at the psyche pushing boundaries like a bit of cotton in the wind!

It’s fascinating and recurrent strides of bold rhythm are unmerciful and hold hate like water to a sponge! The grooves bite deep with startling consequence as a battering of belligerent beats rain down heavily on the audial devices.

It doesn’t stop giving, snarling vehemently and raging like a towering inferno of quickening grooves, so much so the listener will be highly salivating and dribbling like a baby as the torrid creativity carries them away on a seething volatile sea of highly strung notes!

With each click of the mouse a new void is entered and experienced. The angular jaunting’s are portrayed with eerie melodic temperance and emotive vocal force.

It will leave a person so tense their shoulder blades may not recover and they may remain hunched over in foetal form for the rest of their days.

The storm gets darker as the malignant festering grooves play a big part in drowning the recipient to a point of no return.

To be swallowed whole by a force of sheer atmospheric death metal is an enjoyable experience for the death metal addict that is? Swathes of niggling guitar and brute force blast beats rain down supreme and bring with it a curtain of sheer malice that will wrap you inside it and leave you for dead!

Make no mistake this album will slaughter everything in its path – no woman, child or man will be standing after this gutsy tirade!

The bold and mere nonchalant strides it takes through its course is thrilling and tyrannical, snapping its teeth in the direction of the ears in a compelling manner that the listener will have to succumb to – believe me there is no escape from this insanity!

This doesn’t just nibble on the lobes – it kills!