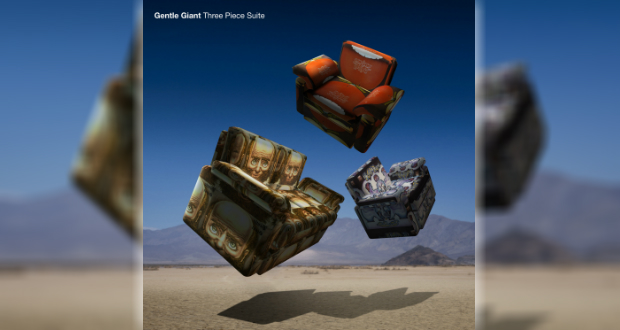 For fans of classic 1970’s prog rock, the name Gentle Giant is one revered by aficionados of the genre. Emerging out of the rubble of Simon Dupree & the Big Sound, they were an influential band right throughout the nineteen seventies, releasing several top-quality albums along the way. They split in the late seventies when Punk was steamrollering all in its wake and, unlike other bands of the time, have never reformed or shown any inclination to want to.

But their name and their legacy lives on and Three Piece Suite, which was mixed and produced by prog rock royalty in the form of Steven Wilson, offers anyone unfamiliar with the band a place to begin. However, this is not a new album per se. Rather, it’s an album consisting of a few tracks taken from each of the bands first three albums, Giant, Acquiring the taste and Three Friends, plus one previously unreleased track. But, be ready to be stretched because this will not be a smooth ride. While other prog bands like Genesis also played and developed some complex musical ideas, they were at least accessible, whereas the same cannot always be said of Gentle Giant, whose music is often complex but without the entry point tracks like ‘I know What I Like’ offered the fan. This helps explain why the Giant have remained a band on the outer edges of prog and one for the devoted fans.

This is because, like Van der Graaf Generator, Gentle Giant ask a lot of the listener. They make high demands on the fan as, musically they stretch themselves to the max with exceptional musicianship and grandiose song formats. Every member of Giant is an accomplished muso and can play more than one instrument.

On tracks like ‘Giant’, from the first album, it’s easy to see why they attracted such flak from punks with their constant stopping and starting, but then Gentle Giant were never exactly one for the casual listener. There are a few bona fide Gentle Giant classics on this album, particularly ‘Pantagruels Nativity’ and the delightful ‘Three Friends’, which together are worth the price of admission on their own.

In sum, this is an album rich in prog scope and ideas, and with some delightful three-four part layered harmonies, notably on the track ‘Schooldays’. If you’re a fan of richly textured music and virtuoso playing, and you’re not familiar with the music of Gentle Giant, this is an album you would do well to investigate, though you’ll not be whistling along after only one hearing.