Review: Twisted Illusion – Insight into the mind of a million faces 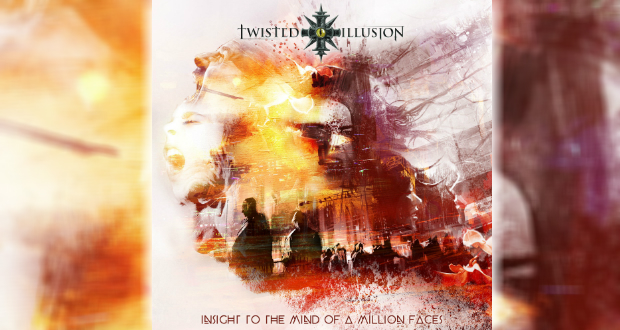 Twisted Illusion is the solo project created and fronted by Matt Jones, and Insight into .. is the follow-up to the debut album, Temple of Artifice. That album garnered critically favourable comments and this album could well be doing the same.

If you like your prog metal played furiously and accompanied by vocals that occasionally have the same impact as a knitting needle in the ear, this is an album which’ll do the trick for you. Twisted Illusion don’t just wear their influences on their sleeves, they’ve had them tattooed onto their arms. The band are clearly influenced by many of the prog giants of the seventies as well as bands of more recent times and, on this album, they attempt to fuse them all together and create their own sound. Think Dream Theatre merged with Slayer and you’re close to the impact and sound Twisted Illusion have, though they’ve yet to acquire the style and class of both these bands.

For the most part, the pace on this album is unrelenting. There are occasions on the album when the music comes close to a full-on sonic assault of the senses, but it’s undoubted there’s some good playing on this album. The musicians sound tight and what they play is well crafted. The problem is that, aside from the vocals often being indecipherable, many of the songs are simply overlong and don’t say anything. The title track, Insight into .., is a perfect example. For any band to release a track 28 minutes in length, they must be confident the song is of sufficient substance and merit to hold the listeners attention span for that long. This appears to have been forgotten here. Bands like Transatlantic can carry this trick off, but Twisted Illusion don’t have that calibre of song or musicianship. There’s significant padding and repetition in the song, and it ends up going nowhere.

Similarly with ‘Discovery’. The track runs thirteen minutes and, frankly, ends up repeating itself, aided by bouts of guitar histrionics’.

This isn’t to say Insight into .. is a bad album. It’s not There’re some good tunes here, the music’s well played and, on stage, several of these songs would really hit the spot. But, I just wonder whether there isn’t a really good single album in here with shorter tracks and with slightly more emphasis on melody.