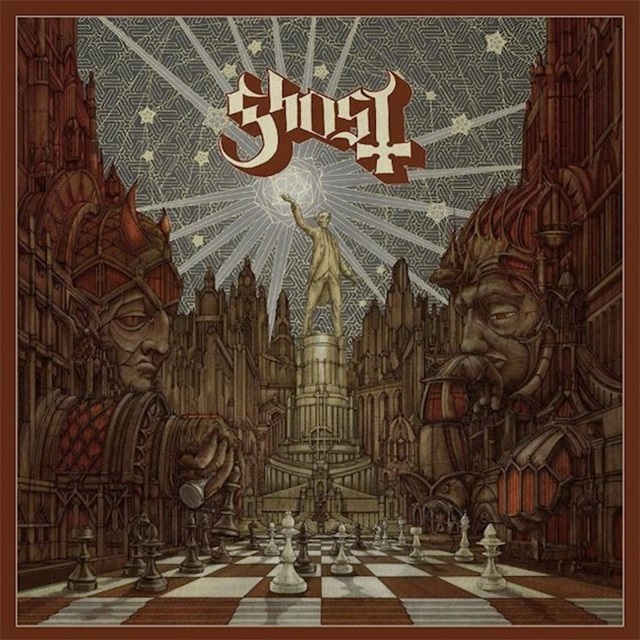 Many wouldn’t disagree that Ghost (aka Ghost BC) are the best act to break out in in the 2010s. Each album is exciting, they have a great image and concept, and perform amazing live shows.

Following their Grammy-nominated album Meliora, ‘Popestar’ features three cover versions and original track ‘Square Hammer. This sounds like the start of a whole new album rather than from a an EP which has been described as an ‘extension’ of the last album.  Equal parts ABBA, Opeth and Van Halen. An excellent combination in anyone’s book. Maybe a flavour of the next album?

What follows is first of the cover versions ‘Nocturnal Me’ which isn’t about goth minions funnily enough, but a cover of an Echo and The Bunnymen classic. Very fitting of Ghost’s style, of course bringing the signature ‘doom’ guitars to the ‘new wave’ track. One of the covers that actually work too. Ian McCulloch would approve.

Folling is Simian Mobile Disco’s ‘I Believe’. Yes, you read that right. Ghost do SMD. Metal taking on mid-00s indie-dance  should be awesome. Alas, it is not. This is a bizarrely dull track on an otherwise promising release. A disappointment, especially compared to the rest of this EP.

‘Missionary Man’ is another highlight on the EP, it’s a Eurythmics cover and the original is strangely more ‘pop’ compared to some of their darker electro tracks  (Sweet Dreams for example, which has been done to death).  This is given the metal treatment and really suits Papa Emeritus III’s vocal style, considering the original was performed by a great pop singer like Annie Lennox. It’s also worth noting the titles of these songs follow the theme of Christianity or the church – a natural trope of Ghost’s music.

Last but not least is the 7-minute ballad ‘Bible’ originally by Impereit (me neither). Sadly this drags out long and is very calm. Shame considering there is a few gems on this record. Ghost’s previous EP, ‘If You Have Ghost’, was awesome beginning to end – as are Ghost’s albums.

Nevertheless – this a great listen for any Ghost fan, but not for the casual listener or someone wanting to get in to Ghost as a band. If this was released a decade ago it would have been a bonus disc on a special editon of the previous album. Download a few tracks if you please but ‘Popestar’ doesn’t require repeat listens. Let’s hope ‘Square Hammer’ is a taster of the next album and they chose the covers more wisely next time.