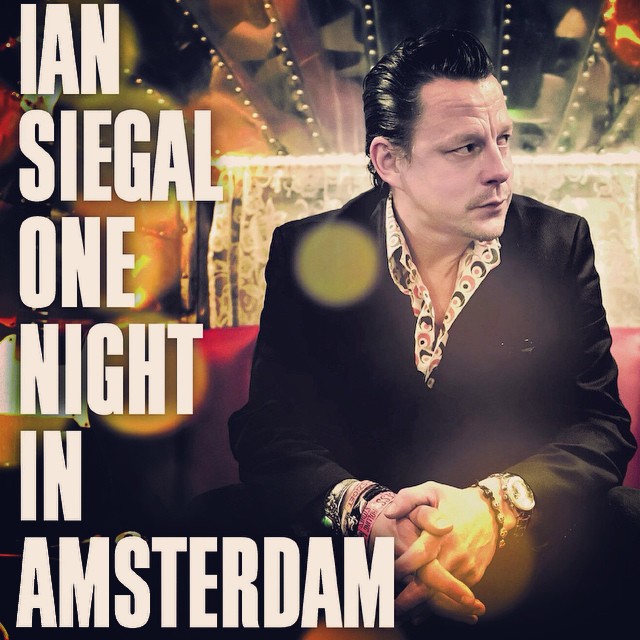 Ian Siegal came out with the solo acoustic Man & Guitar in 2014, whereas this year’s live release One Night In Amsterdam, finds him backed by Dusty Ciggaar on guitar, Danny Van’t Hoff on bass and Raphael Schwiddessen on drums. This Dutch-German band average around the age of only 23. are fairly recent replacements to a line-up that Siegal had been gigged round Europe with for around ten years. That’s a lot of road work, so Ian Siegal’s a name you may have heard of, but like me, not necessarily heard the music of.

Born in Hampshire, developing a penchant for Van Morrison and Joe Cocker he dropped out of art college, went busking with his guitar in Germany, returned, played with Bill Wyman’s Rhythm Kings and has graduated up the blues circuit to be nominated and a recipient of several awards. Despite which, it’s his overall song-writing skills that the serious listener is taking note of. And, upon hearing some of the tracks on this live album I can understand why.

Recorded at the North Sea Jazz Club in Holland in April 2014, One Night In Amsterdam is a real rollercoaster of an album. Just as you think you’re getting a handle on the kind of music Siegal plays he changes track:  If Captain Beefheart, Tom Waits, Van Morrison and Bob Dylan can be said to sing the blues, then by that definition I’ll give Siegal his due too.

Opening up on a rockabilly romp with Duane Eddy tremolo bends over jazzy notes on guitar is ‘I Am The Train’, a song about the sites, events, and fights that take place on a long journey that features a solo that roams as free as the wild landscape it winds through. With ‘Brandy Balloon’ Siegal then moves effortlessly left field into a James Brown funk blues groove and thematically from trains to rivers lyrically as he heads home to see his baby, with a couple of guitar solos thrown in for good measure, the first jazz noted, the second blues cool. ‘Kingdom Come’ features another funk groove but with a time changing impulse as Siegal growls Beefheart style taking on the role of an older man who’s been there, and seen and done it all, proselytising on all the wrong ways you can end up in Heaven at an early age, before some non-verbal Muddy Water affected “ahars” take precedence.

Stopping to introduce the band, he also begins telling the audience about people who’ve influenced him, including a bloke from Nottingham called Harry Stephenson who wrote ‘Writing On the Wall’ a bluesy mix of Credence Clearwater, Bob Segar and ornery old Americana roots and grit with some old school mid-stream pop hook qualities that they play next. Though it goes on a little too long, it’s possibly my favourite track on the album. He follows it with another cover; an evocative, thoughtful, philosophical tune done as a cruising/crushing part ballad going by the name of ‘Temporary’.

Then on ‘Early Grace’ a bottle neck or pedal steel guitar plays slow Hawaiian blues, almost breaks down and suddenly, albeit briefly, becomes the Floyd’s Roger Waters orchestrating The Eagles. A most surreal moment I have to tell you. Guitars shine in the Mex-Tex blues serenade of characters that are larger than life on ‘Galloo Del Cielo’ while ‘Queen Of The Junior Prom’ is tempered blues played with bolero starkness as a world weary narrative of yesteryear unfolds into a big rock ’n’ roll grease ball sound with a country twanging solo that puts it to bed.

A little ragged around the edges in places, as all good live albums should be, One Night In Amsterdam is a fine introduction to a contemporary busking-blues and roots-music troubadour.