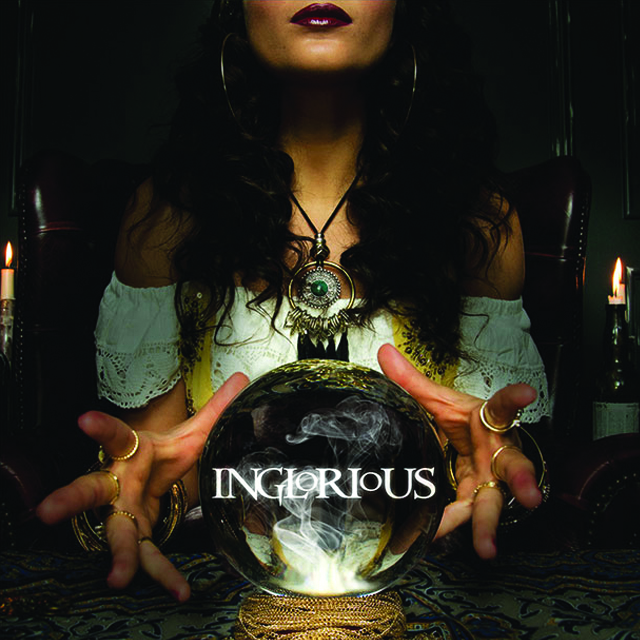 Looking for some retro rock with a bigger bang for your buck? Then it would be safe to say Inglorious are likely to be taking up a fair percentage of any spare cash you’ve got left hanging around this New Year. Not only is their debut album coming out in February but they’ve a heavy touring schedule ahead, opening for everybody’s latest favourite super-group The Winery Dogs across Europe from the tail end of January through to February and then head out on their own here, there and everywhere across the UK.

Mind you, it would be hypocritical not to point out how much Inglorious’ musical influences travel the length and breadth of classic British hard rock’s  inventory before coming back right at you again. First number in they’re Deep Purple playing at being Led Zeppelin, next tune around they’re virtually Page’s boys blasting out Purple’s ‘Highball Shooter’. Sometime later they’re portraying Sabbath gloom with the harmonic wherewithal of Uriah Heep. But then old gits like me can pinpoint that kind of stuff until the cows come home; it’s how we think we’re getting one over on any talented young souls out there. Regardless, in the right hands, what’s gone before is what leads us to where we’re going, and if we can get off at all points in between and enjoy the moment, that’s cool enough for me until I get to live out my days in a rocking chair.

Inglorious were formed in February 2014, when singer Nathan James went looking for musicians, having previously plied his trade singing for the multi-platinum selling Trans-Siberian Orchestra and legendary guitarist Uli Jon Roth.  What he got was a well-rounded rhythm section in guitarist Wil Taylor, bassist Colin Parkinson, and drummer Phil Beaver (the latter two having previously been signed to Mick Fleetwood’s label when barely out of short pants) plus Swedish lead guitarist Andreas Eriksson who brings a modern but melodic edge to the band.

Two weeks in, Eriksson was flying back and forth over the period of a month as they self-produced this album in Buckinghamshire. It’s true an outside producer might’ve trimmed the odd song down a tad, and guest writers like Al Pitrelli (Megadeth) and Joel Hoekstra (Whitesnake) were involved alongside a non-credited keyboard player but the vibe created is pretty good, the band recording together in the same room without click tracks, auto tuning or – apparently – overdubs. To which they sought to capture the sounds of yesteryear when rock ruled the world, particularly the British variety.

They achieve that sucking you in gently by way of a melodious organ solo before thwacking down on the drums and delivering a big fat Hubert Sumlin riff with some bottom-end bass over which James’ caterwauling vocals tell you all about what he’s going to  get up to ‘Until I Die’. You might think it sets the tone but they’re off racing next with the aptly titled ‘Breakaway’ (available as a free download with pre-orders) then the organ’s back playing alongside the rest of the band on the mood shifting ‘High Flying Gypsy’.

After flexing their muscles, they ease off, keeping it simple and start to play from the heart. To that end the slow earnest blues of ‘Holy Water’ becomes a show stopping vocal performance, emotionally-charged without becoming overwrought even as the whole thing gets a whole darned sight heavier. With gospel-inspired harmonies and a jazzy-scaled old school rock ’n’ roll guitar solo jangling away in counterpoint later on, it all somehow blends, flows and builds to an almighty crescendo. Bloody good stuff, I’ll tell you.

Discharging fuzzed up chords, and some bottleneck blues things speed up NWOHM style on ‘Warning’ where they also spare about ten seconds to engage in a vintage Blackmore and Gillan solo/scat-scream call and response. ‘Bleed For You’ follows with its light and shaded mood having the feel of an old Scorpions number (James knowing that set well having played with Roth’s band). Mid-paced they then rock up with harmonies, and come on like Thunder fronted by a deeper toned John Sloman for ‘Girl Got a Gun’. It revolves around its rhythmic beat to feed a glistening mother of a riff, allows for a sing-along chorus then pulls a blinder as Eriksson whizzes round his fretboard. ‘You’re Mine’ curiously sounds like Def Leppard riffing on Whitsnake’s ‘Still of the Night’ with added modern urban rock club dance groove around the middle eight. Then ‘Inglorious’ itself starts with a weird mix of strutting chords and a few bars of what could’ve been a 60s kids’ TV show theme tune and just as your eyebrows raise suspiciously so too does the empirical sound of a jagged and rough eastern-inflected riff on what becomes a veritable battle hymn, with both lead guitar and vocals wailing and moaning aplenty.

Flanged acoustic guitars flesh out another Sloman-fronting-Thunder-style ballad ‘Wake’, likely to be a tear-jerking live favourite; then you’re taken ‘Unaware’ as a piano spirals out in a grand manner giving way to a darker modern sound wherein there are somehow echoes of Aerosmith jamming with Vanilla Fudge, a great chorus hook and a sprawling adventurous guitar solo before it’s all over and you think to yourself retro classic rock hasn’t sounded this good since The Answer’s debut, Rise.

“This record is about vibe, feeling, excitement, energy and performance of songs we all wrote together,” James has stated. “That’s how it came out that day and it will never be exactly the same again. We captured a series of moments that make up our debut album.”

Queen guitarist Brian May likens Inglorious to a new Deep Purple, but I disagree. I presume he’s hearing the Ian Gillan of old in James’ voice, whereas those younger will point to Bruce Dickinson and I’ll add in the less obvious Graham Bonnett or even 60s pop act The Righteous Brothers because there’s also a great soul edge to that rock ‘n’ roll scream he has going for him. However, the rest of Inglorious don’t just tag along as a support band; collectively the five-piece have achieved a group sound despite wearing their influences like a pair of dirty old denim flairs.

If Inglorious can keep it together, building their reputation once the album’s officially released and word of mouth spreads through touring with the Frontier record label’s support, we may be looking back in 12 month’s time at this debut and wondering how they’re going to go through that difficult second album stage. I hope so. They already win my prize for the best CD cover in donkeys’ years.