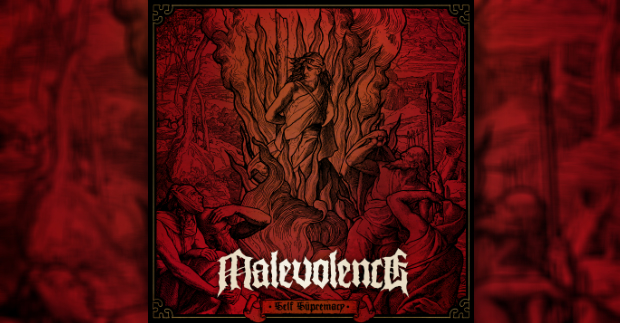 Take a hardcore band, lock them in a room with Pantera’s discography (apart from that Kiss inspired stuff at the beginning that we don’t talk about) and then shoot them full of sludge. Hey presto, you’ve got Malevolence. And if that doesn’t sound good to you then quite frankly you don’t deserve it.

If for some reason you do still have doubts, then hit play and check out the riff that opens Self Supremacy. Doubts gone? Good. Right from the get go they are bringing the heavy, but it’s dripping in groove. The fact it’s played at the pace of a hardcore band only makes it all the better. That is until it suddenly all slows down, and we start head banging. Or we would if we hadn’t already banged our heads right off.

It would be worth grabbing this album on vinyl so that you could play a game where you drop the needle down onto the middle of the disc and see which awesome riff you hit this time. For Self Supremacy is teaming with rifftastic magic. Pick a song any song, and there will be at least one or two examples of brilliance.

That is until they suddenly swing an acoustic guitar at your head with the short instrumental interlude of ‘4am on West Street’. It should be horrifically out of place on an album that revels in Malevolence’s brand of evil, but it somehow works. There are bourbon stains all over this, and that touch of gentleness works accentuates them. On tracks like ‘Slave To Satisfaction,’ you can hear the blues. They’ve just been bludgeoned with a metal pipe.

If there’s a criticism, it’s that it could use a bit of a trim. At forty-eight minutes long, the guitar-loving occasionally gets a bit too much. However, that is indeed picking at straws because it’s hard to complain as they are drawling their way through ‘Wasted Breath’, and you are flipping the table.

Malevolence created a bit of underground buzz off their debut album which combined with a quite frankly terrifying live show put them on a lot of people’s radar. If there’s any justice, Self Supremacy will take them off the radar and into their heads. This album takes a lot of lovely things and whips them up into a slice of hardcore bred goodness. Trust us; you want to take a bite.