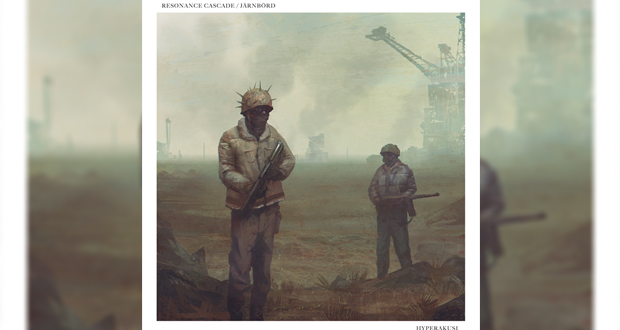 Hyperakusi or Hypersensitivity as us brits would call it is a very apt title for a grind crust album – as if you have ever been to a live grind gig you cannot fail to get caught up in the fever pitch in which you find yourself. It is like an injection of speed – you can feel your body shaking as the mighty strides of rhythms pummel your ears without a care in the world. As short as some of the tracks are – a usual thing for grindcore, but have you ever tried to growl for 5 minutes at a time and not felt any effect? Unless of course, you are the voice for a grindcore outfit although probably less is more in a case like that, as the voice must be preserved. The fast and furious terrain from Resonance Cascade is typical of its genre, no surprises there but still, I find it mesmerising and thrilling to hear. The titles some of which are humorous, others serious but there’s always a sense of humour to be had with grindcore not on stage though that’s where the serious of everything comes alive with a burning passion for brutality.

A change of tack for Järnbörd, which incidentally means Iron Table (although I can’t help but think of ironing board), and it means something totally different in Swedish! Oh helvete, what does it matter anyway as it is screamed in Swedish. I love hearing this raucous music sung in its mother tongue as it is so much more powerful and can help greatly when learning languages – although I can’t help but laugh at Rammstein fans who just blindly sing tracks and not know what they are singing about – hilarious! Although even funnier when it is grind crust/core as the words are virtually incoherent anyway but the words really carry a track to its boundaries and further, fuelling an already pumped up timepiece. I am loving ‘Nykter Utsövd Pumpad’ it is like an army of voices at a football match chanting to a rapacious beat and callous rhythm – good headache material indeed, but I can’t complain as it is one of my favourite genres and sung by Vikings – well, of men of Viking descent anyway. That’s a bonus. I can imagine the rape and pillage swinging their axes over their heads and going in for the kill – but that’s just the grind!