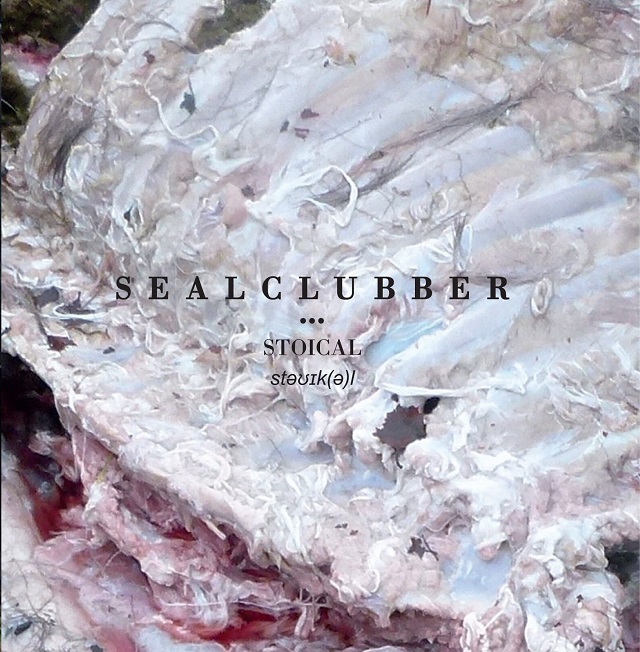 From the name alone, this will not be everyone’s cup of tea. Sealclubber are just like the name sounds, harsh and nasty, but if that’s how you like your music then they are worth as much time as you can give.

Formed in late 2012 in the Black Country, UK, Sealclubber have developed a gritty, aggressive sound. Despite how that might come across, and the genre tags of sludge, punk, noise, crust, doom etc. this debut album hides some hidden beauty in it as I soon found out.

The 6 track release, ‘Stoical’, begins with lengthy 9 minute track ‘Tales of a Romanian Horse Whisperer’. Hitting out hard and in your face with pace before crushing you with clashing chords thickly covered in such a thick guitar tone. Vocals smash out like a piercing blade familiar to most noise/crust bands. The drums run the how, dictating the speed the song continuously changes at. A little before halfway through you get the beauty of it all as long as you have the ear for it. The mellow darkness and clever arrangements that bring a little hope to a forever punishing song, soon to be stolen away by the heaviest of sludgey attacks. A fitting start to any album of the genre.

As soon appears the case, the album isn’t just song after song. Each track bleeds and flows into the next as though it’s been written as a live set, with feedback flowing the continuation straight into the next song.

Second track ‘Hai ma’ sits in at half the length of the opener, a 4 minute comfortably paced riff machine. Ever present vocals are a fight to make out with the aggression of them, but the fit the track perfectly. This will soon be a fan favourite in a pit, a full on attack of the senses that I can only imagine sounded huge on stage.

‘Catalogue of Failings’ shows the truly sludgy epicness of the band, sounding like pure filth being dragged through the gutter, hard not to love! While ‘St. Jude’s Waiting Room, Dead for 12 Days’ brings a gentler atmosphere to the table, another part the shows the hidden beauty in the album, the sound of change to a non-musical break, with the uncomforting voices that will haunt the easily unsettled.

Hitting the final third of the album comes ‘Vow of Silence’, an almost 9 minute blend of atmosphere and noise, the gentler side of the band finally reveals itself with a clean sound, building up slowly but surely to what can only be described as an open, epic wall of crushing musicianship.

‘I Only Desire The Things That Destroy Me‘ ends the album beautifully, finding a trip through all of the most atmospheric writing of Sealclubbers yet. The relaxing ride takes you to the bottom of a cliff by around the 8 minute mark, and ends you in what I can only describe as a musical version of crushing, stormy waves. Finishing you off in such an awe of writing ability, ended stronger than you could imagine. If you cannot find any beauty in this, then you have had a wasted journey, but for anyone that finds their way through the harsh, aggression of this album, the peace that this song brings really is a fitting end. A worthy debut album to start the year with.

Sealclubber ‘Stoical’ will be released January 2016 via Medusa Crush Recordings.