From the Realms of the Far North, an Army of six Icelanders rushes towards Battle! Skálmöld was founded in August 2009 and has since then become the biggest metal act in Iceland. The band’s Debut album, “Baldur” was released late 2010 and was immediately a huge success, both with the metal scene and the more mainstream crowd. Skálmöld then released the album via Napalm Records in 2011 and has made quite an impact on the international metal scene since then. After more than a year of touring and promoting, Skálmöld headed back to the studio to record their second album entitled “Börn Loka” (Loki’s Children). It was released in late 2012 and followed by extensive touring throughout 2013. The year came to a grand closure when Skálmöld joined forces with Iceland Symphony Orchestra for three sold out shows in Iceland’s largest concert hall, Harpa. The concert was released as CD/DVD and became an instant best seller.

Skálmöld plays music that could be described as Battle Metal, a potion of Epic Viking Metal, old school Death and Thrash Metal, entwined with the Icelandic heritage. The lyrics are all written under the strict rules of the ancient Icelandic poetry and influenced by the heathen roots of the Nordic nation. The outcome is a powerful mixture of Heavy Metal and Heroic Sagas, erupting from the boiling core of the frozen Island.

The band puts on a killer show, rocks tight and energetic, so be sure you don’t miss out on Skálmöld. And in the end, who would be better suited for telling stories of the Vikings but the Vikings themselves? 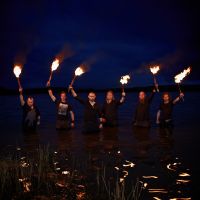 Embracing a vivid combination of strong and powerful rhythmic swagger in true Viking form this melodic encounter is swift and memorable. Beware its infection is spreading, through a raw and striking intervention.

Med Fuglum – With the World

The sultry riffs caress with inviting prowess. It turns into a quickening haze of utter madness. A throaty vocal seethes with fluency and the torrent of beats quicken under a lightning bolt and the rhythms are a tasty and rewarding treat with added voracious appeal.

The fiery temperament of the track exudes a rhythmic vocal edge and paints a picture of frozen landscapes occupied by rugged beats and tempestuous waves of emotion.

Med Drekum – With the Dragon

Creative track that holds an edge of thunderous beating rhythms that protrude with a contagious bite. Poetic and surly it engages on all levels with strong unruly riffs.

I can just imagine the tankards being swung to this one, even Johann Hegg, would approve! It’s a pleasing anthemic track that will be a hit among the Viking followers among us everywhere!

It has connotations at the beginning that sound like Dr Who’s theme tune although it takes a swift path in the opposite direction as expected! The punchy gnawing rhythms are expelled along with a hearty growl.

Another rip-roaring track of Viking prowess! The no nonsense swagger of chunky rhythms are indeed reminiscent of another Viking adventure into the wilderness! Intensity soaked, it soars and roams with immense strings that enjoy gathering pace!

Med Gridungum – With the Bull

This has a more sombre approach than its predecessors, however a very diverse track that looms in an almost sinister manner. Crawling over its sultry landscape are heavy stirring and invigorating passages.

Their name Skálmöld translates to Lawlessness and indeed the band live up to their name music-wise as they are a law unto themselves however, in true heathen style they have opted to take a look at nature, singing about the seasons and has a somewhat mythical approach, especially on the track Med Drekum.

The title of the album is ‘Með_Vættum‘ – By Witnesses, it’s a clever move as it immediately strikes fear into the hearts of Anglo Saxon’s everywhere who were usually, if not always on the end of a Viking axe!

The presence of this album borders on the swift force of compelling hooks and steely riffs! The vocals are heavy and tumultuous in their endeavour to conquer in a no nonsense true Viking assault, but with added metal that binds itself to their loins!

The essences are not all rampageous but have a good strong core running through them. You don’t even notice that the entire album is sung (or screamed) in Icelandic as the music is really impressive and burns a gripping and glorious mark into your heart.

Igniting into a raw and abrasive conclusion of feisty intrigue that allows the mind to focus on days when Vikings ruled supreme which is outlined in the fantastic track ‘Ad Hausti‘. The track bristles with absolute Viking potency!

They say the pen is mightier than the sword, but I wouldn’t fancy my chances against these guys when in battle! Holding real potential to pillage and plunder, with their swinging of tankards full of ale! Skálmöld dice with Mother Nature and both come off triumphant!

Skálmöld ‘Með_Vættum’ is out now via Napalm Records.