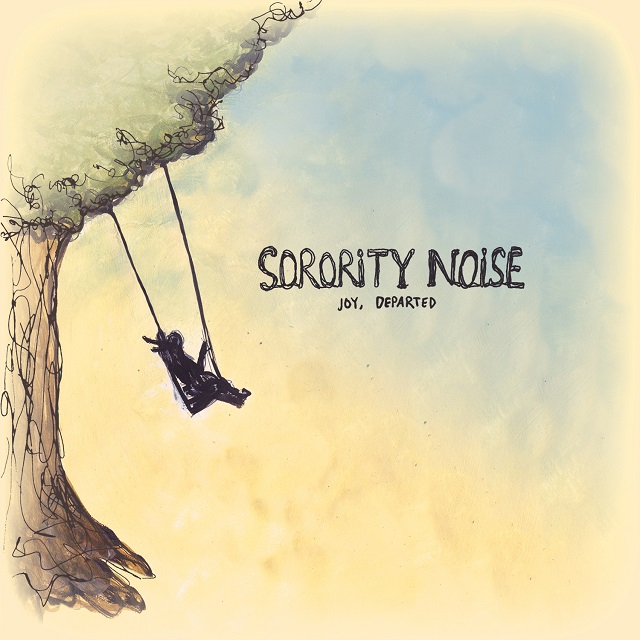 Formed in 2013, Sorority Noise have outshot the ‘golden years’ of the original emo movement by quite a while – and whilst their second studio release Joy, Departed is very much a throwback to as far the early 1990s, there are plenty of other elements worked into the mix too – from pleasantly twee indie pop to punk and hardcore.

Opening track ‘Blissth’ provides a slow, haunting intro to the album, finally breaking into a guitar-led instrumental that creates soaring promise of what’s to come. From the opening strains, it could be expected that the album is quite a subdued affair, but latter tracks bring a faster, more upbeat vibe and some fantastic guitarwork and arrangements. Follow-up track ‘Corrigan’ is a likeable indie-punk track and one of the perhaps ‘easier’ tracks on the album – with a chorus that harks towards the likes of early Brand New.

‘Your Soft Blood’ is a melancholy affair which leads into crashing guitars that take the song worlds away from your average alt-pop album, giving the perfect opportunity to lead into…something pretty darn different. In quite a contrast, ‘Art School Wannabe‘ has a much more jaunty, indie pop feel with a singalong chorus that would fit perfectly into a Weezer album tracklist. The chorus refrain of “Maybe I’m just scared to admit that I might not be as dark as I think / maybe I’m not the person that I never wanted to be” is one of the catchiest and strongest hooks on the album.

Speaking of lyrics, there’s plenty on Joy, Departed for those whose music tastes lean towards the slightly-sad to get excited about, with lines such as “I wanna be the water in your lungs, lets you know you are drowning” (‘Blissth’) setting a pretty solid tone. But as well as the melancholy, there’s also a feeling of emergence, acceptance and forward motion, as demonstrated in ‘Mononokay’ – “I’ve gotten better at getting better” being another powerful chorus line that hangs around the brain long past the end of the record.

Although one of the standout tracks, ‘Using’, initially begins with an ode to addiction, it leads into an almost-jubilant self-protesting shout of “I stopped wishing I was dead”. Having experienced his own struggles with addiction and mental illness, vocalist Cameron Boucher’s delivery is both believable and moving, with a final key change that would sound out of place when delivered by a lot of other bands – but works perfectly within what’s perhaps one of the most defining tracks on the album.

Coming in at nine tracks, Joy, Departed is somewhat an emotional ride – for every ‘Art School Wannabe‘, there are the soft strings of ‘Flourescent Black’. Sometimes almost devastatingly wrenching, Boucher’s rough-sounding vocals create a stunning harmony with both soft and jarring instrumentals. In spite of their seeming fondness for the emo genre, Sorority Noise have managed to create a record that brings a slightly retro sound to the forefront of modern music. If it wasn’t for the solid and heavy guitarwork and well-crafted heavier instrumentals, there’d be potential for elements of Joy, Departed to veer too much towards the twee. But instead, it’s a powerful and fantastically arranged record that pretty much kicks anything else that this writer has heard this year in the ass. Twice.