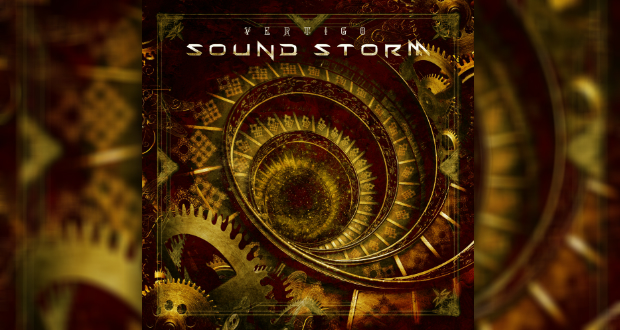 Sound Storm are a Naples based band who formed in 2002, and whose initial brief involved being a band covering songs by Maiden and Savatage, but they soon branched out and began writing their own operatically flavoured songs and on this, their fourth album, they offer us some quite dramatic examples of what they’re writing and performing now. The band describe themselves as playing cinematic and symphonic metal and they add, we don’t compromise on it either. They certainly don’t.

Their music falls in the same category as bands like Nightwish, Epica and Within Temptation, in that the music they perform is grandiose in its range and scope, and they give an expansive free rein to their creative ambitions. The music on this album is dense, complex and very well played, with the musicians changing key and pace almost effortlessly, but what it means is there’s often no entry point for the listener, the music isn’t always accessible and at times, the music almost overpowers the listener with its intensity.

This isn’t to say Vertigo’s a bad album; far from it. There’s much to enjoy in the quality of the musicianship, which is stellar in places, and there’s a lot happening on this album, which can be viewed as a metal album, particularly with tracks like ‘Metamorphosis’, which is almost Nightwish but minus Floor Jansen, and with the occasional deviation from the norm, such as the track ‘Alice’, a slow, almost church hymnal tune.

Sound Storm are not afraid of dealing with epic themes either. Their previous album, Immortalia, was a concept album about the quest for eternal life, and with ‘the songs being tied together by the common theme of immortality of the soul.’  They don’t shy away from big themes on this album either, and lyrically this album is almost a Greek epic set to symphonic rock. On Vertigo, they tackle themes such as love, war and battles with the Gods, and some of the lyrics make Neil Peart’s read like nursery rhymes. If Verdi had written symphonic rock, it’d probably sound something like this.

What this means, however, is that Vertigo will probably appeal only to aficionados. What separates bands like Nightwish from Sound Storm is they have commercial nous, an ability to make their complex music accessible. The moral here is, more doesn’t always mean more.