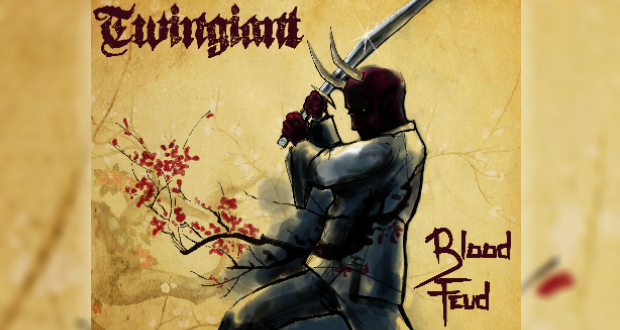 Twingiant are a Phoenix-based band who, it is said, are in the process of refining their sound from a conceptual stoner rock template and towards a 1970’s rock-based guitar meets modern sludge metal. On the evidence of this album, the modern sludge metal wins hands down. Whilst there are moments when they play like a 70’s guitar band, those moments are few and far between, and usually to be found just before or just after a sludge guitar breakout. The intensity of the playing on Blood Feud is almost ominous, but then even the heaviest of bands must draw breath occasionally so, while there are riffs on this album capable of battering the listener into submission with their power and full-on onslaught, there are also moments when the band demonstrates some quite touching melodic sensitivity.

Blood Feud opens up with ‘Throttled’ with its 1970’s style riff it sets the pace for what’s to follow, which is some quite sizeable slabs of metal played with the amps set to full-on distortion. This is followed by tracks like ‘Ride The Gun’ and ‘Refossilised’, with some quite delightful stoner rock guitar playing and a wah-wah style of rhythm guitar. Like many bands of their genre, listening to this album a feeling of I’m pretty sure I’ve heard this one before settles in. But it’s soon dispelled because the quality of the music played elevates the album from being just another set of copycat riffs. There’re some excellent songs on Blood Feud and the quality of the playing is superior. The band are tight, and they play with the conviction of the righteous.  In particular, mention should be made of the drummer, Jeff Ramon, who holds the whole thing together with some great playing.

There are plenty of instrumental passages on this album and several tracks are devoid of vocals. What vocals there are largely indecipherable and, even after a few listens, it still wasn’t possible to identify what was being sung, if that’s the word. Only on ‘Poison Control Party Line’ could any words be understood. But that’s a minor quibble when set against everything else this album has to offer the fan. If Twingiant ever venture across the Atlantic, then a place on the bill at Bloodstock or Download has to be theirs for the taking.