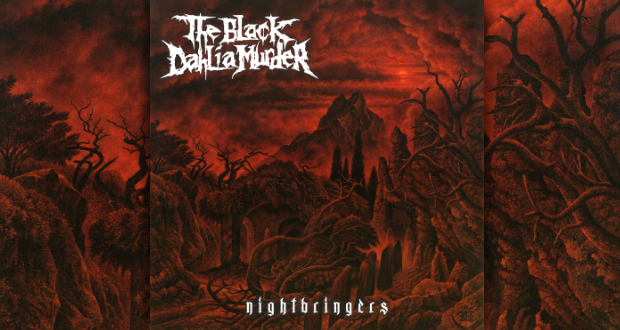 The Black Dahlia Murder have long been one of heavy metal’s underappreciated gems. For over fifteen years they have consistently released album after album of punishing and yet melodic death metal that has rarely veered away from being fantastic. Yet, they never quite seem to get the credit they deserve. They are almost too good, and because of that, there’s a chance we are taking them for granted as they release their eighth album, Nightbringers.

However, it’s clear that whatever the wider world might think, Black Dahlia at least have some idea of how good they are. This is a confident album and first track ‘Widowmaker’ revels in that. Within seconds of the grandiose opening, it’s clear this is a band in their element. It then rips off as its relentless riffing is only overshadowed by touches of flair when they burst into elaborate guitar solos. Despite that, there’s no fat here. This is a stripped-down slab of punishing metal, and it’s all the better for it.

Somehow, ‘Of God and Serpent, Of Spectre and Snake’ then manages to have even more bite as it beats you around the head. The best you can do is cling on and hope you come out the other side in one piece. It’s almost a relief when they hit the title track and slow things down a step. Not that it’s a pondering walk in the woods, it’s only slower in comparison to what has come before.

For that frantic pace is Nightbringers’ secret weapon. It’s only just over half an hour long and when it ends you find yourself staring at the speakers hoping for more. These nine tracks are honed weapons, set straight for the part of the body that wishes to flip tables and smash a pint glass over your head. It might not be safe, but damn is it fun.

On top of that, The Black Dahlia Murder are fantastic musicians, and the technicality of this album is breath-taking. They don’t feel the need to beat you over the head with it, though. Everything is where it needs to be and is the exact right length. Those previously mentioned solos only work to elevate the music around them, not to show off.

Underneath this technical mastery and blistering pace, the fact of the matter is that The Black Dahlia Murder write metal that you want to listen to. It’s heavy as hell, and yet it’s got hooks that latch into your flesh. ‘Kings Of The Nightworld’ is the perfect example as it will have you bouncing your foot as you careen across the room. They are a band operating at the highest level possible and long may it continue.