Review: Trivium – The Sin and The Sentence 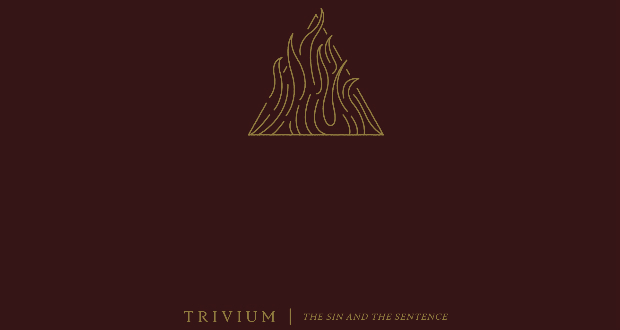 Despite having a difficult few years with frequently changing personnel and what some may call an ever evolving sound that has garnered mixed reviews, influential Florida based metalcore outfit Trivium return with their 8th studio album, The Sin and the Sentence.

The album starts with the title track and lead single, ‘The Sin and the Sentence’ which is one of the strongest tracks on the album and hearkens back to the days of ‘The Crusade’, it displays the aggression that Trivium are known for while still being incredibly melodic which can apply to many other songs from the early songs on the album, ‘Beyond Oblivion’ and ‘Other Worlds’ feel like safe Trivium fare complete with harmonised leads and clean melodic choruses which is for the best considering how polarising the previous album, Silence in the Snow was, which is not to say that this album plays it entirely safe.

The main thing to note about this album is that the vocals are almost entirely clean which may deter some long time fans that said the Matt Heafy’s clean vocals have improved significantly from album to album and this release is no exception.

Heafy has always been a talented vocalist and the strength of his clean vocals almost completely makes up for the harsh vocals being pushed into the background, while they are still present in the heavier tracks like ‘Betrayer’ and ‘Sever the Hand’.

‘The Heart from your Hate’ and ‘Endless Night’ are the closest things Trivium has released that resembles a ballad since ‘Dying in your Arms’ albeit with better musicianship and lyricism, they both exist as welcome breaks from so many high octane thrash tracks and work so well in helping to change up the pace of the album.

Each member showcases undeniable talent, the riffs and solos are incredibly tight as can usually be expected of a Trivium release and Alex Brent is the strongest drummer the band has had since original drummer Travis Smith, at no point do any of the songs feel self indulgent or too long, the album features a 7 minute epic entitled ‘The Revanchist’ which is arguably one of the strongest songs they have written since ‘Shogun’, it definitely isn’t the heaviest song on the album but the musicianship and storytelling involved is amazing, this probably should have been where the album ended as the closer, ‘Thrown into Fire’, is one of the weakest tracks on the album and doesn’t particularly add much.

Trivium have been a band that have shown clear signs of evolution between each album and this is no exception, each album for them is a learning experience and with each new element each album brings it demonstrates that Trivium can only improve over the coming years.

The Sin and the Sentence will be released October 20th via Roadrunner Records.