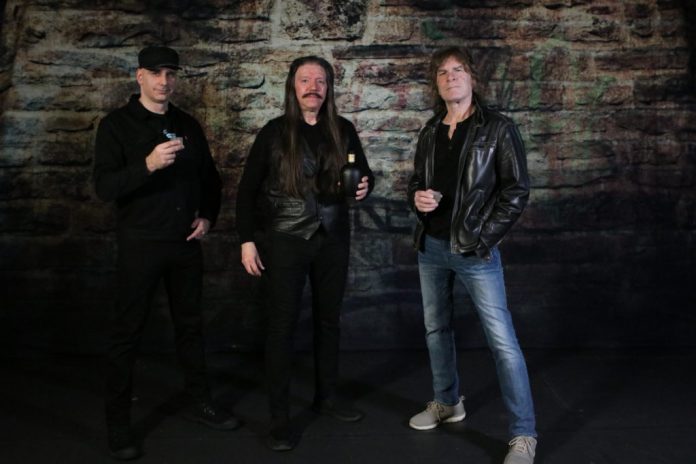 Closer To The Flame is the full-length debut album of Riot Act, a band comprising of two former classic-era band members Rick Ventura and Lou Kouvaris, plus two others. It’s an album with ten tracks of pulsating rock played by guys who’ve all done a few laps around the block. There’s also a bonus CD containing twelve all-new recut classic Riot tracks, with these recordings being the last involving Lou Kouvaris, who sadly succumbed to Covid in 2019.

The original Riot were active in the mid-70’s-early 80’s, performing at the inaugural ‘Monsters of Rock’ festival, now known as Download, in 1980, and they were tipped to go further and make a name for themselves. A volatile combination of bad luck, ego, record company hassles and the untimely deaths of three band members derailed any momentum the band generated, and led to the band being referred to as ‘Spinal Tap without the jokes.’

Rick Ventura has certainly been around, being one of the original Riot back in the late 70’s, and now one of the mainstays of the current inception of the band as Riot Act. He states while Riot V continue with their latter-day power metal evolution, “As Riot Act, we aim to recapture the sound of the early Riot of 77-83 and bring it into a new era.” I’ll admit to not being overly familiar with the original Riot so can offer no comment as to whether what’s on offer here improves/detracts from the original band, but the songs performed here are stronger and more dynamic than those offered up forty years later. Tracks like ‘Rock City’, ‘Outlaw’ and ’49er’, with guitar licks from Mike Flyntz of Riot V, plus Tokyo Rose, which sounds like an attempt at writing a hit single, are all good driving rockers, and if this is what the original Riot sounded like, it was indeed a pity they suffered the level of ignominy they did.

What Riot Act have offered on Close To The Flame are a series of tracks sounding like they’ve come straight from the classic rock songbook, with a vocalist, Don Chaffin, sounding uncannily like young Axl Rose. There’re riffs and hooks aplenty, it all rocks and there’s little doubt seeing them ‘live’ would be a rockfest… but, the tracks pale when compared with the recut tracks, and there’s really nothing on the new album you haven’t heard so many times before by other bands. There’re a few fairly ‘okay’ tracks on the album, the slow song ‘Angelina’ and the fast rocker ‘Right Between The Eyes’ being examples, whereas ‘Straight For Your Heart’ is right out of the AC/DC playbook. These songs aren’t as strong as the remakes from early Riot. This is all mainly good support band stuff, and there’s nothing here to suggest they could do things differently on any other albums they make.