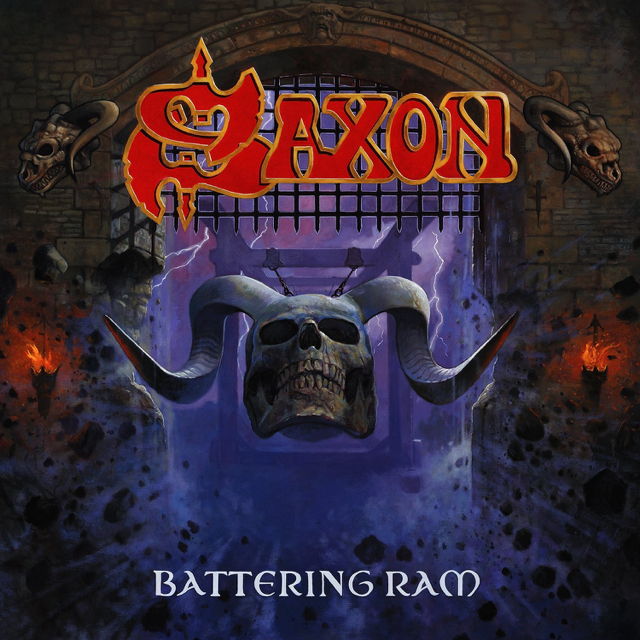 Saxon are the best of British, the kings of metal with generations of fans everywhere. They’ve never changed from what they always have been, and why would they? They answer to no one, and new album Battering Ram is the perfect reason why they shouldn’t have to either.

Opening the album with the title track ‘Battering Ram’, it is just that. Saxon have taken the bull by the horns and rode the beast into battle right through anything that stands in the way. Vocalist Biff Byford is carrying on in his typical style, making it sound as though he fresh out the starting blocks, not like he’s almost 40 years into his singing career.

‘The Devil’s Footprint‘ starts out like a fabled story of days gone by, before starting out with some amazing riffs, a track that will have everyone reaching for their air guitars and singing the hearts out, while ‘Queen of Hearts’ takes a step back with a fist pumper of a track, blending a slower tempo with a great use of dynamics and melody to build the power.

‘Destroyer’ sparks back the into life with a decent pace, simple yet rocking riffs show that these old guys are not short of any ideas, with ripping solo’s thrown in for good measure. This 3:30 track showboat of talent is something that explains everything about Saxon. ‘Hard and Fast’ is just like the previous, it does exactly what it says on the tin, bringing a thrashy triplet gallop to the riffs. A sheer pleasure to hear.

‘Eye of the Storm‘ begins with more classic, yet refreshing riffing from the monster guitarists Doug Scarratt and Paul Quinn. The simplicity of the riffs with control they have make for easy to love listening, but masterful use of the tremolo bar for the solo soon makes you remember you aren’t listening to anything as simple as you thought, and just to make sure you know that, the anthemic ‘Stand Your Ground’ blasts at you like an old German 88 anti-air gun, just pure business.

By the eighth track, you get what for me is typical of bands of the era, ‘Top of the World‘ plays like a story rather than a song. Mellow parts with expressive parts everywhere, a perfect blend of melody and drama in musical form, with hugely expressive guitar playing throughout. Almost a shame it ends a little after 4 minutes.

Finally though we come to the first of two tracks topping the 6 minute mark. ‘To the End’ is another slower paced track with a fist banging chorus of epic proportion. A slamming drum beat and a bass leading a brilliant swell in the middle with a gentle mellow solo. ‘To the End’ is perfect Saxon, and this is definitely the stand out track for me.

‘Kingdom Of The Cross’ steps onto familiar grounds of many bands, bringing up the history and fascinating stories that have continued through generations from the Great War, Flanders Field and the Somme are spoken of in poetic form. Having visited such places myself at a time when Iron Maidens ‘A Matter of Life and Death’ came out, I can’t help but think of how much more of an impact ‘Kingdom Of The Cross’ would have had on me over that such is the way it is written. I can’t help but feel slightly choked up listening to it with my memories of the place, and as generations go by now, such stories being told through music like this is for me probably the best way to carry on their memory. A fitting end to the album.

For the deluxe edition of the album, one more track in typical Saxon fashion rings out, an all out rocking track. As if the new wave of British Heavy Metal is still new, this carries on that style in true style, Saxon really are far from done, and with an album like this, I cannot wait to see what they write next!