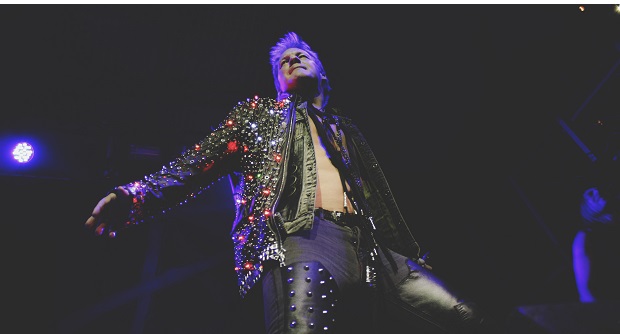 “FOZ-ZY! FOZ-ZY! FOZ-ZY!” The crowd are going wild for Jericho tonight. Tonight’s headline event has been a rumble at the Riverside – but we ain’t talkin’ no smack-down. This is the tag-team of Fozzy and Nonpoint with Sumo Cyco in their corner.

One thing Fozzy frontman Chris Jericho doesn’t like to do is: mix his wrestling career with his music. It’s pretty damn hard to separate the two when it has been a rock ‘n roll Wrestlemania tonight! DING-DING! First approaching the stage from Ontario, Canada – SUMO CYCO! All pro-wrestling comparisons aside – this isn’t an actual sumo wrestler gone loco. This is the punk-metal powerhouse fronted by the sensational Skye ‘SEVER’ Sweetnam. You may have heard a lot about this band in the music press lately, with good cause too. As the four-piece prove tonight you don’t need a major-label to make a name for yourself.

SEVER is appropriately dressed  in black and white stripes (this is Newcastle-Upon-Tyne after all) and bursts in to ‘My Name Is Rock ‘N Roll’ getting the attention of the crowd, who might not even realise this band are on before Nonpoint. The ‘sumo’ part of this band may refer to the heavyweight sound from the well-oiled machine of guitarist MD, bassist Thor and drummer Wolf. This isn’t a group of retired Gladiators, but the strange stage names reflect their colourful punk stylings echoing Skindred and early No Doubt. 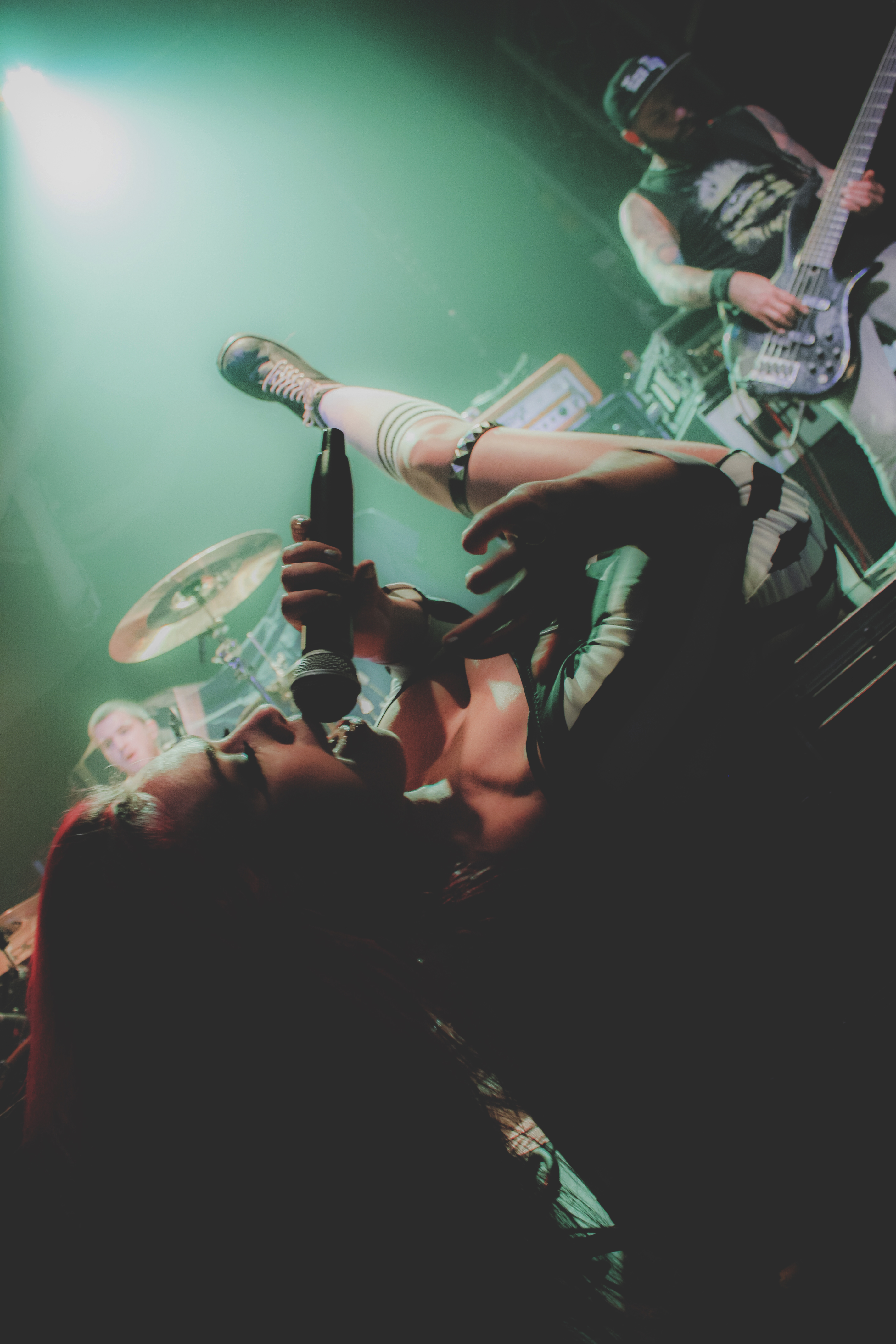 A cover of Macklemore’s ‘Can’t Hold Us’ might not be fitting to a Fozzy gig but shows off SEVER’s vocal abilities and how the band can turn a hip-hop track in to something you can rock-out to.Sumo Cyco’s sense of rhythm is something that hits you like a clothesline as soon as fire up another song. ‘Like A Killer’ and ‘Go Go Go’ are great examples of this. Here are a band who I’m sure will be headlining a stage bigger than this in a year’s time. With a new fan-funded album on the way, there’s nothing stopping these Canadian destroyers. Ending with their biggest tune ‘Fighter’ is an appropriate tribute to tonight’s throw-down. Major labels take note: this is what you are missing. 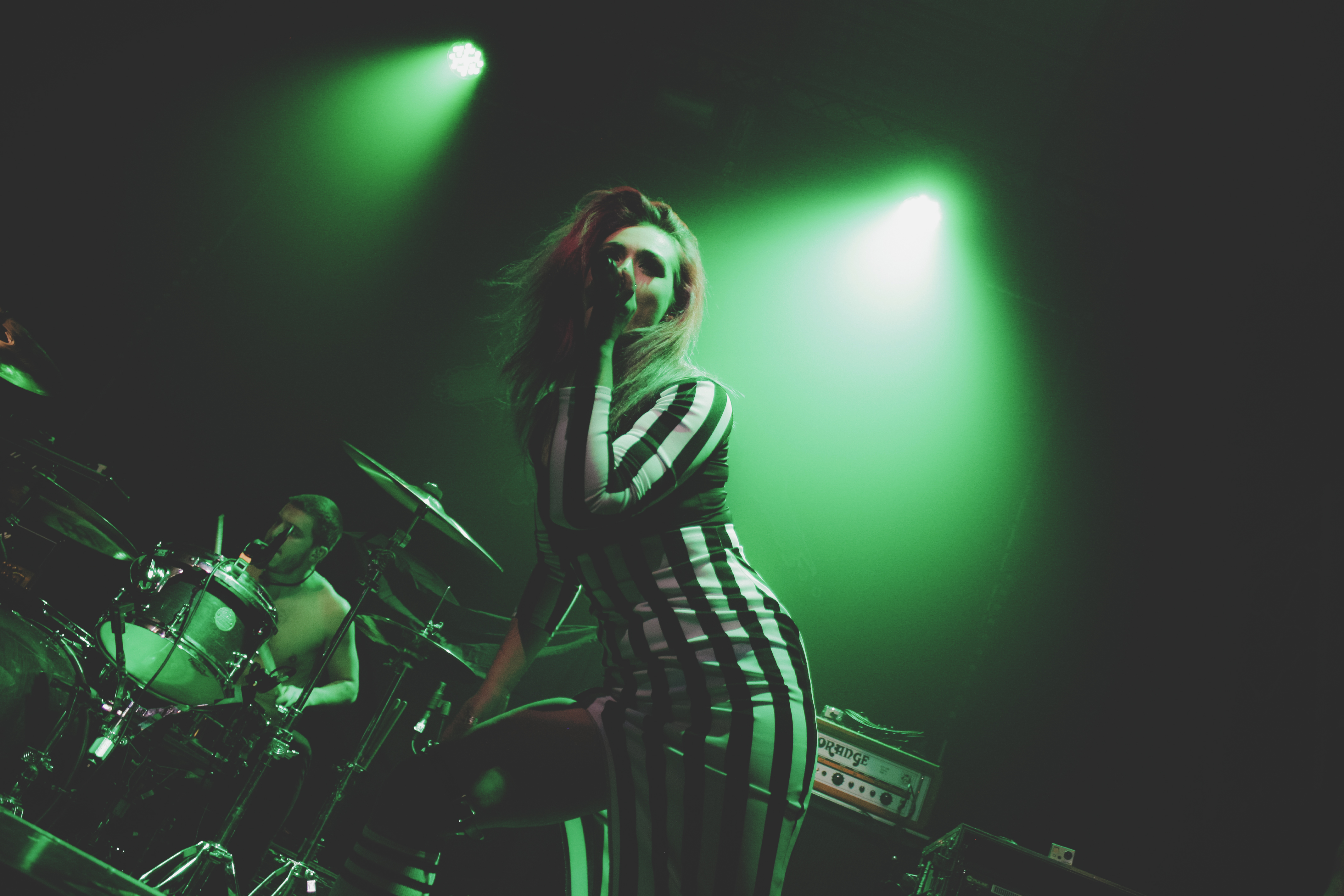 Next on stage, hailing from Lauderdale, Florida- nu metal underdogs: Nonpoint! Bit of a flashback to the ‘attitude-era’ of metal as the five-piece don chunky dreads, baggy jeans and vertical bass guitars. Frontman Elias Soriano even does a Barack Obama and announces: ” Hello Newcastle…we are NOT Korn”. Well now that’s cleared up, let’s see what these guys can do. They certainly know how to entertain with hard-hitting tracks like ‘Pins And Needles’  and the RATM-inspired ‘Breaking Skin’ but are so far overshadowed by Sumo Cyco. Nonpoint even have a go at turning Phil Collins’ ‘In The Air Tonight’ in their own style which is very amusing but the common consensus is they are filling the gap between Sumo Cyco  and Fozzy. Oh, and if your’re wondering where you have heard of Nonpoint from: Their closing track ‘Bullet With Your Name’ appeared on WWE video game in 2007. Nearly got through that without making an obvious pro- wrestling connection…

And now for the MAAAAAIN EVENT! Coming to the stage from Atlanta, Georgia. Fozzy!

LET’S GET READY TO RUMBLLLLLLE!

That wasn’t a reference to the Ant ‘N Dec hit by the way – If you hadn’t realised, Fozzy front-man Chris Jericho (aka Moongoose McQueen) moonlights as a WWE wrestler. Jericho almost treats his gigs like championship bouts as he has to grapple with the audience and win them overusing the special moves his rock idols have taught him.  The five-piece enter the room, one -by-one, to remix of ‘War Pigs’ – referencing their latest album ‘Do You Wanna Start A War’ Something quite poignant, considering recent events in the world. Or is it just a jibe at David Cameron? Either way we are drawn to Jericho’s LED-lit jacket. A must-have for Christmas 2015. The band start with the aforementioned title track and the crowd are in a choke-hold of hard rock throughout.

Jericho once compared Fozzy to ‘the bastard child of Metallica and Journey’ in a way, he is right. They have the romantic melody of a soft-rock band like Journey on tracks like ‘She’s My Addiction’ but can pull off a heavy riff for songs such as ‘To Kill A Stranger’.  Jericho himself obviously draws inspiration from great front-men like Jon Bon Jovi, Axl Rose and Mick Jagger. He once earned the nickname ‘The Ayatollah Of Rock N’ Roll-a’ despite being slightly bad taste, is pretty accurate as the Canadian is well-versed in rock showmanship. This could well be the sports-entertainer in him but he plays the crowd like Rich ‘The Duke’ Ward plays guitar.

Keeping in mind that Fozzy started as demi-covers band (using the gimmick they recorded the originals 20 years prior and Sabbath, Priest, etc. had ripped them off) the majority of this set is all Fozzy originals. With the exception of ABBA’s ‘S.O.S.’ and  Krokus’ ‘Eat The Rich’ – arguably displaying both sides of Fozzy. When the house-lights turn back on, it is a given that everyone in attendance has had a great time. We have seen three brilliant bands which have done their own thing. You can’t get better than that. Despite the magnitude of Fozzy, Nonpoint, and instant classics Sumo Cyco. Tonight’s winners are the audience.

Keep checking back for an interview with Sumo Cyco front-woman Skye ‘SEVER’ Sweetnam.