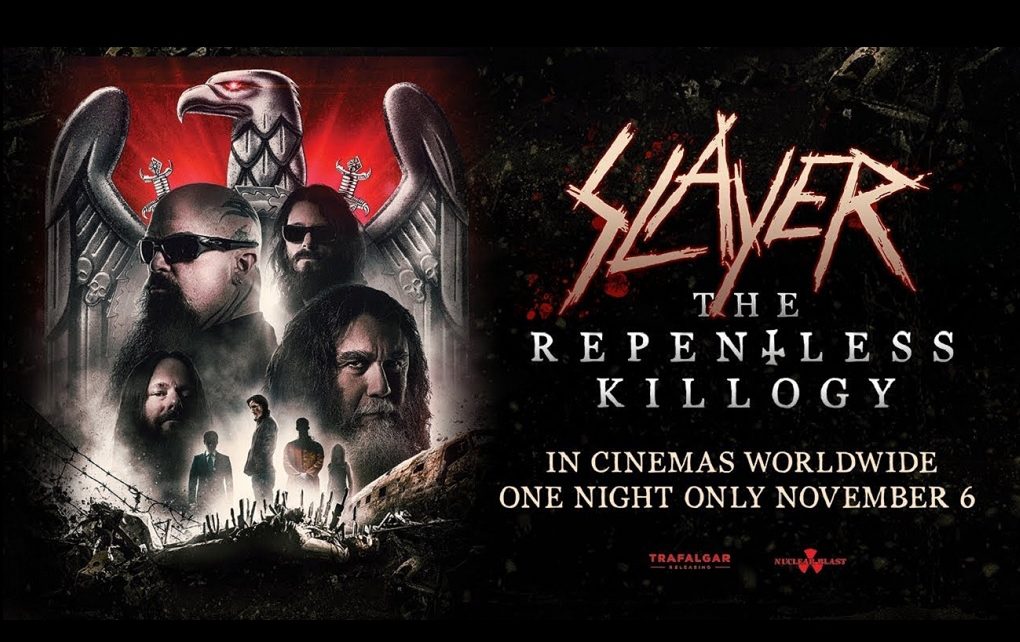 A cold, bleak evening in London rushing through the masses of miserable, sullen faces from their daily routine, we look to break our own routine of battling our way through crowded venues to the front of gigs and elbows to ribs and kidneys to get our shots of bands on stage, swapping it for one night only and a more comfortable, relaxing seat down in Islington’s Vue cinema with a select few peers for the climax and viewing of Slayers Killogy. Laid back, yes, any less intense than our regular gig outing? not even slightly!

Having been a rock solid line up since 2013 with the return of Paul Bostaph on drums after the departure of one of the founding members Dave Lombardo, the original remaining pair are finished off with the one and only Gary Holt who really is the only man worthy to fill the side of the stage once owned by Jeff Hanneman, and the film kicks off with the four sat together being interviewed about the cycle since 2015’s Repentless release, their videos and so forth, all seems well and good until a gunshot rings out. Exiting the room, the band come across a body, and so begins the story…

For the less aware, the short film focuses around the story created from the three music videos released since the Repentless album launch, they film includes these three videos also, but with a more visceral, violent feast on the eyes, it is not for the weak willed or feint hearted! Boasting a huge cast of names well known (and some less so) Bill Moseley (House of 1000 corpses), Danny Trejo (Machete), Tyler Mane (Halloween II), Derek Mears (Friday the 13th) and Richard Speight Jr. (Band of Brothers) to name just a few, the film follows our patch eyed protagonist, Wyatt, played by Jason Trost (the patch is real too!) as he battles his way and overcomes his former life which has come back to haunt by destroying his new life. Fighting his way through a sea of neo-Nazi members. It plays like a violent gore-fest action movie of the 80’s bred with the style and grace of John Wick, hunting his way to find Luther and using any means necessary to get to him, no punches held. With a trail of bodies in his wake and a path of blood, all paths lead to the sold out Slayer show at the LA Forum, calling in favours to get his man, the film takes us into the show as the chaos comes to an end during the fitting Angel of Death, and it is at the climax we see the tie in to the interview and movie. A little Scooby doo-esque acting from the band around the body does give a bit of a laugh. It is from start to finish, some seriously impressive cinematography with a violent story worthy of its 18 certificate, for what should be obvious reasons, the film itself was banned in Germany, so they get the concert only, but even then the quality, sound, speed and accuracy Slayer perform at is worth the money, that alone makes it hard to sit still and enjoy!

With the one time only showing now out the way, the release on Blu-ray, vinyl and CD will be available from tomorrow to enjoy in the comfort of your own living room. A fitting release to make sure the band lives on in our hearts and ringing ears as they soon look to leave the stage empty for the final time. We would like to thank Slayer for the memories, and of course Nuclear Blast and Cosa Nostra PR for their time, effort, work, company and invite to one of the most memorable cinema trips a metalhead could ask for!

You can purchase Slayer: The Repentless Killogy on Vinyl, CD and Blu-ray formats from tomorrow Friday the 8th via Nuclear Blast Records from clicking on the image below.