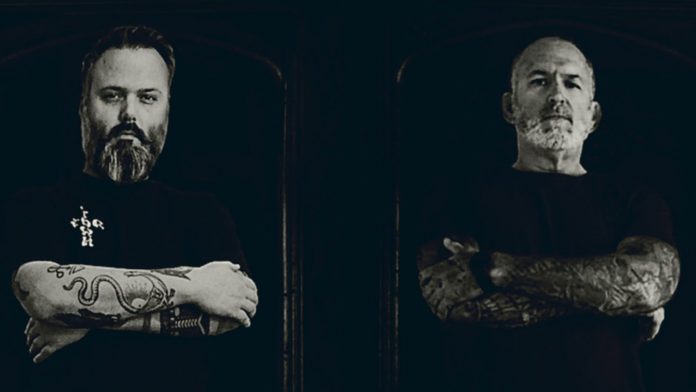 American vocalist, Phil Swanson has been working with German multi-instrumentalist Tim Schmidt since 2006 in a band called Seamount, although I only know Tim from his time in Thronehammer. They, like the continents, drifted apart until, in 2019, they did an EP under the Smith & Swanson banner. This garnered the attention of No Remorse Records who offered them a full-length release… and now we have it, their self-titled album is out on 25th February.

Their combined talents provide seven songs that fit fully into the heavy rock genre and will inevitably draw comparisons to Black Sabbath and Judas Priest… yes, that influence is easily discernible, but there is also plenty of originality on offer.

Opening track, ‘No Colors’ has the Iommi weight, with a lighter touch on the picking and Phil has a rock voice of his own to match the heavy riff and lyrical theme. I was expecting a fiery guitar solo after the bridge, but instead, the vocal melodies replace it effectively. ‘Like Glass’ is even heavier with hints of slow thrash, if you know what I mean… it’s a seven-minute run time means we do get a solo and it is well crafted, short and dextrous. Then, midway through the time change cuts in a la Budgie and the faster riff plays cleverly with the initial melody and then pauses and goes all Planet Caravan before returning to riffing… it works.

‘Refuse’ adds in some Priest in a very good way. My favourites, for the Screaming for Vengeance intro and the title, ‘Bastard’ illustrates how something can sound like but remain original. The closing track, ‘Worms’, is more Priestly riffing and vocal style but again is original and a close runner for best song.

Ok, there are no dramatically new approaches here, but it is definitely forty odd minutes of quality, enjoyable heavy rock/metal.