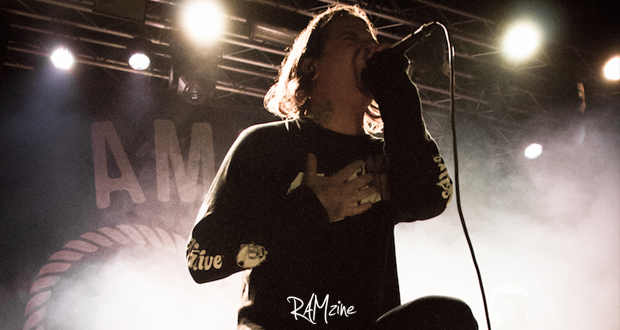 As soon as Being As An Ocean appear Joel (vocals) jumps to the barrier singing and the crowd are loving it! He’s running along the barrier jumping at the crowd and then decides to take a walk through the crowd. The atmosphere is fantastic; I’ve never seen a guy so eager to be up close and personal with the fans. Track ‘L’exquisite Douleur’ got the biggest reaction from the crowd.

[divider]Taking a swift u-turn from the more soother tracks from BAAO, its Defeaters turn to make some noise. Stating the set with ‘Basted’ Joel gets the crowd fist pumping and cause anarchy. The whole set has transformed the night with a now constant supply of pits. The crowd always yelling along to the songs, and not giving a dam about anything else but to have an awesome night!

Before The Amity Affliction come on a spokesperson from Hope For The Day comes onto stage. He talks about suicide and how it affects a surprising amount of people aged 18-25 year olds. His goal tonight is to raise awareness and hope that some people can pass on helpful information to anyone suffering with depression and suicidal thoughts. During the speech he asked the audience to raise their hand if they themselves or someone they know has attempted to commit suicide and scarily enough over half the crowd raised their hand. This is proof that suicide is a major factor in deaths and needs to be prevented. The crowd applaud and cheered during the speech, which shows positive support for the charity.

The Amity Affliction, the band we have waited for. The crowd are eager and yell for them to come on stage. Opening up to one of their most well known single ‘Open Letter’ and everyone looses it in excitement, yelling, jumping and screaming along. There is a constant wave of crowd surfers eager to get on stage, only to be stopped by those pesky security guards.

Continuing the set with more known tracks from their new album ‘Lost and Fading’, ‘The Weigh Down’, ‘Pittsburgh’ and ending the show with ‘Don’t Lean On Me’. The set has been a wave of ups and downs, happy bouncy tracks and others with deep feels but doesn’t ever bring you down. I personally feel that ‘Pittsburgh’ is a key track, especially with Hope For The Day charity having been there. As music is an expression ‘Pitsbrough’ is an example of how to express how you feel but into music and hope that others understand.

In all I’d say its been a very eventful night! A wide range of different genre’s all-colliding into one epic night full of emotion. I’d say its defiantly one for the record books and going to be one to remember for a long time.