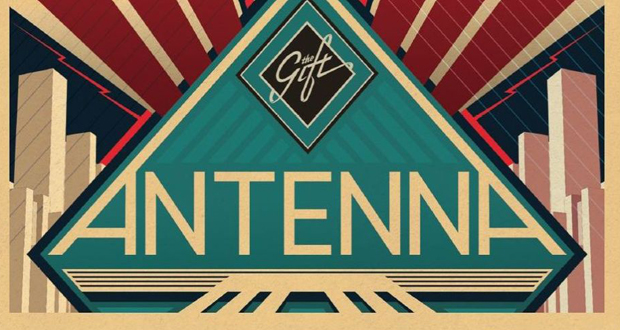 The Gift continue to evolve on Antenna

Following on from 2016’s Why The Sea Is Salt, The Gift have now released their much-anticipated follow-up, Antenna. Three years in the making, it’s an album which probably won’t count as the band’s most ambitious work, but it’s one which sees The Gift moving away from playing the lengthier, more complex pieces they’ve become known for (no song here is longer than 9.52 minutes) and playing more punchier, rockier tunes. The music they play can be soft and melodic, but also fairly powerful and complex and, while they play with considerable sophistication, what they play is always accessible, which is clearly evident on this new album.

On first listening, Antenna’s an album which might initially surprise some of the band’s fans, who consider The Gift to be just a prog band with their roots deep in the 70’s. But, their music is a kaleidoscope of influences; they’re just as likely to be influenced by a modern band as by any of the acknowledged giants of the genre. This gives the band a considerable hinterland to draw from and, with this new album, the band has simply gone where its muse has led them. It’s more rock based, more direct and less conceptual, though still with several flashes of the epic musicianship they’ve become renowned for in prog circles. Singer Mike Morton says it’s no accident the new album is rockier and more contemporary sounding…

“We wanted to do something more direct and punchier and, whilst there’s no concept, a lot of Antenna is about how difficult it is to communicate with each other… how we’re sending out messages which don’t always hit the target.”

The album kicks off with ‘We are Connected’, a straight ahead rock tune with some fine guitar work and it sees The Gift channeling their inner Rush. This is followed by three part song, ‘Changeling’, which is, according to Mike Morton is, “about an idealistic young politician wanting to make the world a better place, but who gets corrupted by power and those who pull the strings.” ‘Back To Eden’ is the most commercial track and a likely candidate for being played on Radio 2, whereas ‘Snowfall’ is a radical departure for the band, with just Mike singing and Gabrielle playing keys on a very reflective piece. Similarly, ‘Hand In Hand ‘ is an instrumental number, featuring just David Lloyd and Stefan Dickers, with no flashy guitar pyrotechnics, just some sensitive and very controlled playing from both men.

But, despite the supposed change of emphasis, The Gift haven’t strayed too far from their melodic, neo-symphonic stance, and they demonstrate this with some intricate and very intelligent music, along with superlative playing, notably on tracks like ‘Long Time Dead’, the very atmospheric ‘When You Are Old’ and ‘Wild Roses’. The album finishes appropriately with ‘Closer’, about bringing people closer together, and it’s a great way to end the album.

The Gift’s last album, Why The Sea Is Salt, was described as a ‘series of exhilarating musical journeys,’ whereas Antenna is less conceptual and a series of shorter songs. But it’s no less effective because it suggests The Gift are continuing to evolve and prepared to try something a little different, and hopefully this album will be the one to give them a further push towards wider recognition.