The Struts win over London with their magnificent performance 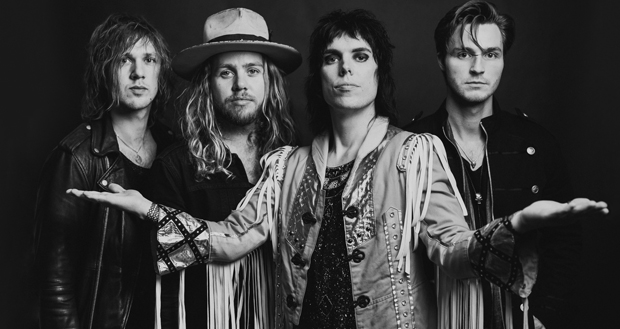 YOUNG & DANGEROUS is the name of their latest album, one of the most interesting and magnetic rock releases of last year. Tonight The Struts are concluding their UK tour with a sold out gig in the capital which shows how much their fan base has exponentially grown recently. Lead vocalist Luke Spiller, guitarist Adam Slack, bassist Jed Elliott and drummer Gethin Davies are known for their catchy tunes and astonishing live performances. Throughout their career they have been chosen to support major bands such as The Rolling Stones, Motley Crue and Foo Fighters to name a few, hence why they have become particularly popular in America. Nevertheless the UK is also developing a strong appreciation towards these guys, in fact the four-piece is rapidly gaining respect from press, radio and fans in their own home country. It’s indeed surprising to see how many people raised their hands tonight when Luke asked who was there to see them for the first time, a sign that this charismatic quartet is definitely going towards the right direction.

First off is the support Kelsy Karter, the singer from New Zealand who has recently made herself known for her well planned PR stunt of a fake Harry Styles tattoo on her cheek. When the news came out it completely shocked the entire internet, especially because she made people believe that the ink was real. In order to publicise the new single about the ex One Direction pop star she used the help of a make-up artist and a celebrity tattoo artist to make it all look believable. She has definitely succeeded in gaining the attention of a vast number of new followers but that move has also left us presuming her repertoire wasn’t ready enough to make a name for itself. And objectively speaking, it isn’t. Tonight she opens with ‘Talk’ and ‘Catch Me If You Can’, at times her voice sounds like a much less mature version of Amy Winehouse and her way of moving together with some of her physical traits remind of Lana Del Rey. Indubitably she’s a good looking young woman but her persistent screaming for excitement (or attention) in between songs combined with her constant throwing her hair back can become quite annoying. Surprisingly, Harry didn’t show up for the dedicated hit but Kelsy performed it with the same intensity as if he would have actually been there. Accompanied by a tight and very glamorous band The Boys With Long Hair, Kelsy can eventually aspire to a fine rise by making the most out of her momentum and by working on improving her repertoire.
Shepherd’s Bush is packed, all seats are taken and the standing area looks rammed and evidently eager to welcome The Struts. The guys get on stage all smiley and ready to give all they have. “London don’t you know who I think I am?” says frontman Luke before opening with the single ‘Primadonna Like Me’ who totally honours his extravagance. He knows he’s a diva and not in a negative way, people didn’t come out to see the average Joe performing live and Luke is very far from being that, in fact he’s a real rockstar in the makings. The band continues with the energetic ‘Body Talks’ minus Kesha who duets with Spiller in the official video. By the end of it and just before ‘Kiss This’ Luke provokes the fans inviting them to leave if they weren’t ready to dance and sing along. His cheekiness, confidence and command of the stage are close to none. Throughout the gig he manages to involve every single person by making them emulate his movements, clapping and waving their arms. It’s pure fun and it’s pure rock ‘n roll delirium. Getting everyone’s attention is not always easy but Luke makes it look like an effortless task. His wardrobe, style and sound reminds of a young Freddie Mercury, after all the singer has never denied that Queen have played a big role in his musical growth. The Struts might have been influenced a lot by the legendary British rockers but they know how to create and deliver something fresh and innovative, something that makes turn heads.
‘In Love With A Camera’ is another highly catchy and more poppy tune from the new album which is followed by a brilliant execution of ‘Fire (Part1)’. ‘Anyone feeling dirty? Anyone feeling sexy?’ asks Spiller before performing ‘Dirty Sexy Money’ with a certain expertise and persuasion that would put some stadium bands to shame. With only two albums to showcase it’s clear that tonight the guys are using a bit more talking in between songs so that their set wouldn’t look less rich, but despite that there isn’t one single dull moment. Luke has got his fans in the palm of his hand, the crowd seems absolutely excited to be joining the fun. The ballad ‘Mary Go Round’ sees the audience switching on their phone torches whilst singing along to the chorus and a brilliant rendition of ‘Dancing In The Dark’ by Springsteen sees an over enthusiastic young fan jump on stage to sing with Luke and imitate his moves. Shepherd’s Bush claps at the end of each song as if it was the end of the gig, there’s a genuine sense of exhilaration in the air. ‘This is been a successful UK tour and it’s all thanks to you’ says Luke expressing gratitude towards his public who has been an absolute joy to look at throughout the gig. His band is amazingly tight and well assorted and it’s impossible not to recognise that – even when there’s such a big personality like Spiller to front them. Luke makes sure to introduce his band mates before ‘Where Did She Go’ and funnily points out that the reason why they didn’t have enough budget for confetti or pyros was because he spent it all on his outfit, which would have been absolutely worth it if it was true. The Struts finish off with an excellent encore which sees Luke on the piano performing the impressive track ‘Ashes (Part 2)’ before saluting the fans with the anthemic and high-spirited ‘Could Have Been Me’. These guys have the full package and they are definitely destined to have a bright, prodigious and very promising future ahead of them.
Share
Facebook
Twitter
Pinterest
Linkedin
Email
Print
Mix
Previous articleDavid Duchovny steals Shepherd’s Bush heart
Next articleDownload 2019: Simple Creatures, The Wonder Years, Dinosaur Pile-Up, and many more join line-up