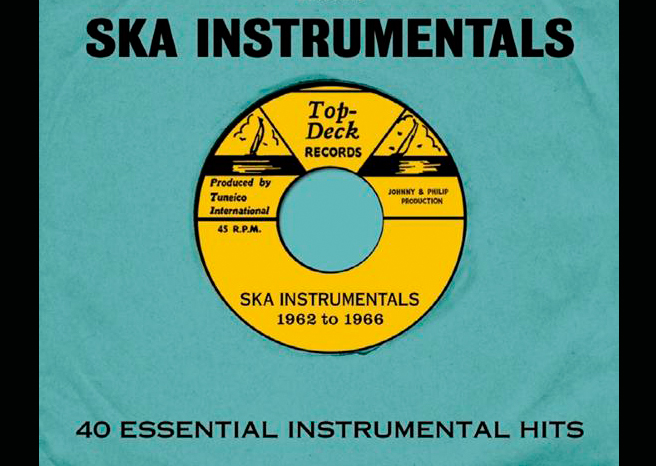 After forming the ‘Top Deck’ sound system with his brother Ivan, ‘Justin’ Yap launched his ‘Top Deck’ label in 1962. The initial releases by local vocal-acts sold moderately, but the following year, he made it into the big time with popular 45s featuring the leading trumpeter, Baba Brooks – who had a hit with ‘Independence Ska’ and played with The Skatalites – as well as recording sessions with several other artists. Over the next few years, and up until his departure for the US in 1966, Justin Yap’s run of hits continued, due in no small part to his employment of the exceptional talents of Jamaica’s number one band, The Skatalites.

The very best of the group’s recordings, along with the remainder of Yap’s instrumental output throughout the Ska era has now been collected on a 40 track 2 CD set, ‘Ska Instrumentals’ issued by Spectrum Audio.

Alongside the many hits are numerous lesser-known gems and alternate cuts, featuring the very best of Jamaica’s Jazz-trained musicians, thus illustrating why ‘Top Deck’ is today widely associated with the very best in original Ska. This collection features three tracks from Oswald “Baba” Brooks, and also four tracks from Johnny Moore (who was trumpeter and founding member of the pioneering Jamaican ska and reggae act The Skatalites). The record also features two tracks from Jamaican rock-steady reggae guitarist Lynn Taitt, and a pile of tracks from Skatalite tenor saxophonist Roland Alphonso. Other contributions include over a dozen Skatalites tracks, and individual tracks from saxophonist Tommy McCook, trumpeter Raymond Harper, keyboardist Jackie Mittoo, ska trombonist Don Drummond and also a track from DJ King Sporty – who became famous for co-authoring “Buffalo Soldier” along with Bob Marley.

Opening track ‘Shock Resistant’ (‘Baba’ Brooks) is a slow rattlesnake of a tune, with a shine like a well polished soft-shoe. The sparkling trumpet percolates through the piece before taking a back-seat for a while.  Later, it returns, and then it triumphs like a winning smile on a wet day.

Don Drummond’s track ‘Love In The Afternoon’ has a wide and jaunty stride. It steps out deliberately and happily – like a dapper man promenading on a sunny afternoon. The trombone squirts out golden rays of sunshine against those gritty rhythms. And it keeps you gasping for more.

Johnny Moore’s ‘Yogi Man’ has a lot of cha-cha charm. Can you imagine yourself sliding and sneaking on the dusty dance-floor to this one?  We can.  The trumpet pegs the whole piece together like a well-tailored velvet dress-suit.

Jackie Mittoo’s ‘Warlock’ has those funky go-go rhythms that may remind you of the Amerie song ‘1 Thing’.   Then King Sporty’s 1965 hit ‘El Cid’ has that “King of the sword…” spoken introduction that will amuse you. And a chuckling rhythm that evokes the hustle and bustle of Port Antonio on a hot working day.  The horns are fruity and ripe, and the pace is slow and stuffy.

Lynn Taitt’s ‘Ska-Ta-Shot’ is a refined and noble track [both Take 1 and Take 2 are included here.]  The gamely trumpet is shameless and impudent. The sax is sinuous. But the guitar work is surprisingly demure.

Roland Alphonso’s ‘Live Desire’ (Sax Version) will remind you of work by English composer John Barry (composer of the James Bond theme tunes.) It has that nervy edge. The sense of impending danger and thorough sophistication. The sax comes out strongly against the ruggedly exquisite jazz piano. And the enthusiasm of the unshaken guitar adds a kind of flamenco rind to the whole piece. This is a stand-out track.

Other great tracks include the dancing rattler ‘Non-Stop’ ( Roland Alphonso) which is as colourful as a rag-day jamboree. And also the tasteful ‘Scattered Lights’ by Tommy McCook.

The Skatalites are probably best known in the UK for their big hit ‘Guns of Navarone’ (not on this instrumental collection) but they have also worked tirelessly in sessions with big names such as Delroy Wilson, Desmond Dekker, The Wailers and Lee ‘Scratch’ Perry. They have recorded more than 30 studio & live albums, as well as contributing to scores of other discs.

This ‘Top Deck’ instrumentals collection includes 13 ‘Skatalites’ tracks from their ‘Top Deck’ years. These include the sleazy Oriental foot tapper ‘China Clipper’ and the dusty, flea-bitten, mosquito-buzzing tune ‘The Reburial’ which has those voodoo horns and a slinky, stinking beat.

Other Skatalites treasures to be found on this compilation include ‘Smiling’ which has an urgent call-to-arms right at the very start. And a compelling beat – with anxious solo pieces – and those drums are so agitated and so angular that you will find them to be as stimulating as a caffeine-bomb attack. Your heart will be skipping beats to those palpitating rhythms – and the languorous vibes – long after the track is over.

Also try the wild-west shooter ‘Ringo Rides’ with that lazy canter, and those dusty peaks of cactus-sharp trumpet that will sting at your eyes and tear at your pants. As this tune trots off into the distance, you can almost feel the blazing hot sun burning on your brow.

With so much quality to choose from, this collection offers the casual listener the time and space to soak in – and to sort out – the assorted rhythms and sounds … perhaps collecting a few gems along the way.

But this is also a superlative collection for any ardent devotee of ‘Top Deck’ dance sounds, or any serious collector of the type of treasures that were found around 1965-6 – when golden-age ska gradually changed direction –  turning into what we now think of as rocksteady.

So put on your black loafers, top off with your pork pie hat.  Maximise the volume. And get up and dance!