Trucker Diablo wag the Tail End of a Hurricane 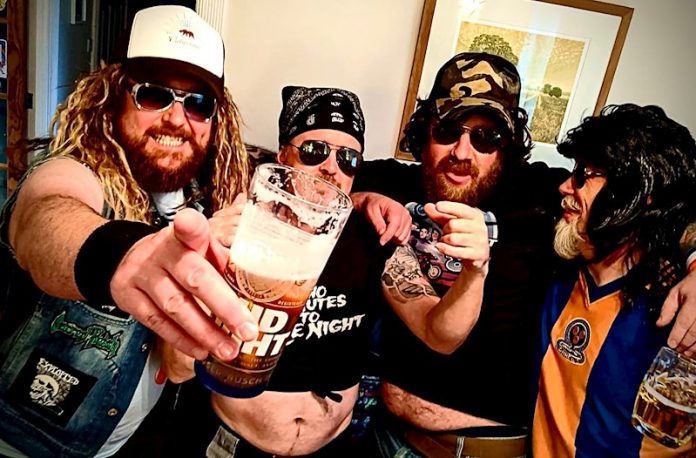 From a startlingly good debut through the three subsequent releases one thing was always guaranteed: Trucker Diablo would be there to rock your socks off with 80s flavoured boogie, anthems and mayhem. Well, in a world beset and buggered by COVID, they’ve have still managed to do it again…but better! Their new album, Tail End Of A Hurricane, brings a slightly modified approach but rest assured — they still load their songs with big riffs, subtle and not-so-subtle humour, and they can still out-power-ballad nearly everyone on the planet.

They do shift a little on the glorious, punk laced ‘Insects’ as they justifiably take a swipe at lots of techie things like algorithms, bots, scammers and trolls and a few others I don’t understand either. But who cares: this is genius, heavy punk rock. Elsewhere, lead track ‘BTKOR’ (an acronym for “big truck keeps on rolling”) reassures that the template is still there – riffs, choruses and quality musicianship – but fresh as any daisy. The title track is a trucker’s tour de force with some great guitar all the way. If you want ballads with bite, they’re here too…’The Edge Of Tomorrow’ is a heavier ballad whereas ‘The Trade’ may be lighter but still bears its teeth.

‘This Burning Heart’ satisfies any Thin Lizzy wishes with the twin intro, but then it develops into something more sophisticated and rather good. Contrary to its title, ‘Slow Dance’ isn’t slow, but is rather a crafted rocker. They save the best to last, unbelievably, as ‘Bury The Ocean’ may be slower, but with its ponderous intro riff giving way to gentle picked guitar and a vocal melody of quality, it keeps building the tension and the menace in a brilliant way. The lyrics are as deep as the ocean too, and the guitar solo is incendiary…love it!

Considering the guys have pieced this together in the midst of this bleedin’ pandemic and delivered such a high quality slab of rock is to lauded. Let’s hope they can get these fine songs out onto the road very, very soon because, on this evidence, Trucker Diablo are firing on all cylinders and need to get this out to the fans.

Tail End of a Hurricane will be released on 7th May.