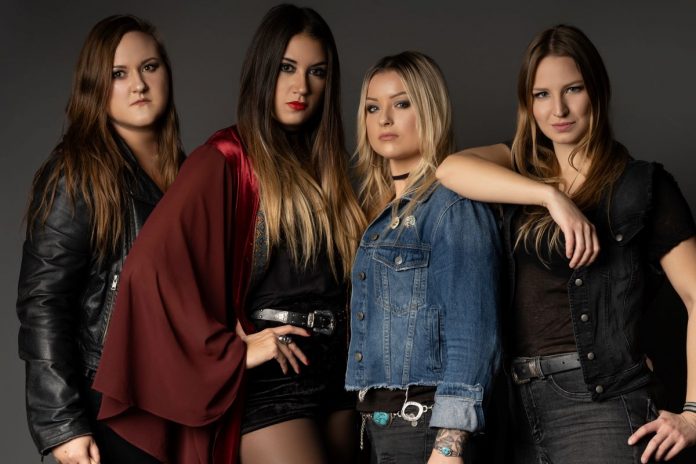 Swedish she-rockers Thundermother release the Heat Wave Deluxe Edition 2021 on 21st May, and its preceded by two single, ‘The Road Is Ours’ out last month, and the just released ‘You Can’t Handle Me’.

Heat Wave, in its original form was released in July 2020. It stormed the Swedish national charts and achieved similar results abroad, including reaching #6 in Germany. It was released through AFM Records, as will be the new edition.

The Heat Wave Deluxe Edition will be a 2-CD digipak and additionally available as various limited coloured double vinyl versions. Not only can you find the complete original album on it, but also a bonus CD/vinyl with no less than 10 other previously unreleased tracks.

Last year’s success owes much to Soren Andersen, an experienced producer and gifted guitarist from Denmark who has worked with the likes of Glenn Hughes, Mike Tramp, Dave Mustaine and Tommy Aldridge, who was able to fine-tune Thundermother’s obvious talents

It has been said that from the beginning there was a great emotional and creative harmony between the producer and  Thundermother.

The result was a sophisticated version of the band’s natural AC/DC/Motörhead sound, with fresh, modern hard rock elements, accompanied by a full 70s groove.

Thematically, the songs dealt with the whole spectrum of life. From love ballads to blues pieces to party smashers – With her blues-soaked voice, the charismatic front woman Guernica Mancini gives the songs a unique touch and in its refined form the Heat Wave Deluxe Edition is very much something fans will want to check out.

You can check out the video ‘The Road Is Ours’ right here at RAMZine. Meanwhile, The Heat Wave Deluxe Edition is available by clicking here.

Thundermother is also set to play what’s been described as the “biggest smallest concert” at Olympiastadion Berlin.

STAR FM Berlin, concertVR and Thundermother are inviting a very special group of fans there on May 4th, 2021. A group of people much talked about a lot, but that has suffered under a lack of support: this concert is for those forgotten Covid-19 heroes – nursing staff, shop assistant and many more important people who have helped us get through everyday life.

For all the people, that can’t physically take part concertVR offers a concert stream in Virtual Reality on May 11th in cooperation with Ticketmaster (also available as Stream without VR glasses). For more information click here.