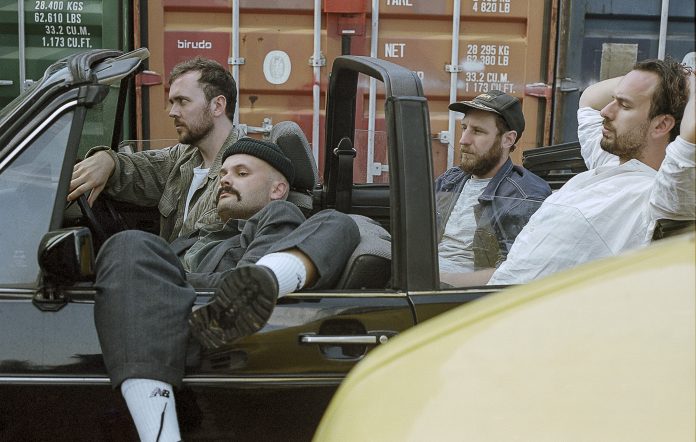 Opening with a jolt of brittle, shellac-esque guitars, Uppers is jagged from the very start. First track ‘The Big Curve’ introduces the stream-of-consciousness vocal style that embodies the record, opening with an enticing “This could be the first day… of the rest of your life.” Vocalist Charlie has a way of turning a stream-of-consciousness delivery into a biting hook throughout Uppers, often feeling like he’s only found the lyrics as he begins the sentence. This lyrical approach lends itself perfectly to the album’s aesthetic – abstract at times where it wants to be, but sharp and pointed in all the right places. The second track ‘Press Gang’ is a perfect example of this, spending the first minute jumping across textures and rhythms, before converging at the 1:20 mark on a huge, spiky riff and proclaimed vocals.

The standout track here is ‘This Island’. A cutting critique of the rose-tinted nostalgia that surrounds Brexit, not only does it showcase some of TV Priest’s best guitar work, the synth lines that dance around it are a real high point of the record. Twinned with the preceding track, Powers Of Ten, a slow-burning song that steadily builds in the way the best post-rock songs do; TV Priest show a real variety and depth of sound.

Despite the lyrics placing the album firmly in the present, the persistent drums throughout the album are one of the group’s nods to the past, drawing on bands like Can and Neu! in its rhythms. There are also comparisons to be made to contemporaries; Girl Band and IDLES are both good reference points.

With only a handful of gigs under their belt, TV Priest are a hugely promising band and their unique mix of post-punk, krautrock and noise rock could go in a million different directions in the future. For now, though, Uppers is a solid debut and definitely one to check out for post-punk fans.